"The whole concept of coverage is weird." Catching Up With Chase Dehart

Words and photos by Rob Dolecki Additional photo by Fooman

It's no secret that Chase Dehart likes to speak his mind when he feels the situation calls for it, particularly on Instagram. One glance of his Peanut gallery comment wars, and you too can be sucked into the vortex that is scrolling through hundreds of at times entertaining, though more often than not nonsensical and absurd, responses from many keyboard warriors.  For better or worse, the social media circus is a part of BMX, and Chase knows this all too well.

Fresh off a recent etnies trip to the UK during the summer, and coming into the 11th hour for filming his "Chapters" section, we sat down with Chase and got the intel on his Liverpool experience, new signature parts in the works, Insta-beef, vlogs and more.

What have you been up to?
I got back from England recently, and the weather’s been crazy hot out. Just been chillin’ and riding a little.

The trip was awesome. It was me Benny and Devon.Everybody killed it. It definitely rained a little bit on and off, but we had some good days. I had jet lag the whole time. I never really had it before; I felt drowsy and dizzy the whole time. I thought something was wrong with me. Usually I’m on trips and I’m a first up and last to bed kind of person, and I was just down to sleep in.

What was your favorite spot?

A curved bank with a curved rail at the bottom. You could do wallride to grinds. There was tons of shit to ride, that you just had to hit. It felt like Philly.

That was the first time you’ve been to Liverpool?

It was my second, but the first time I was only in Liverpool one day during the Cult/ Federal tour. We got to ride street in London one day and filmed a couple of clips there. This time we just rode Liverpool for ten days. England was awesome.

How was chillin’ with Benny L. in his ‘hood?

He’s positive and just wants to hang out, ride, have fun and get shit done. I’ve had him stay at my house before too. He was psyched to drive us around in his cab and take us to spots and all the bullshit he likes to ride like we do. It was awesome Benny's awesome.

What did you think of Liverpool?

It was hard to get used to the gloomy weather. We’d be out riding and it would rain. In your head, that shuts down the day. But then you give it a half hour and you’d be able to ride. You had to convince yourself there’s light at the end of the tunnel each time it rained.

How was BMX Day there?

The turnout was amazing, a few hundred kids. Tons of talented kids. We just chilled and tried focus on them. It was a good day. Two dudes took bad falls to the face though. One was like a ten foot skid on the face, other than that it was real good.

"I rather just put footage out; I'm not gonna make you watch me eat lunch."

It’s been good. I personally haven’t seen the footage so I’m not sure where I’m at. I just like the most current shit I film. I have a hard time with the two-year thing. There’s some clips I’m going to be glad I saved. I think I have something solid. I just want to have a lot of fast-paced lines, and stick to what I know, and things that look and feel good to me. I’m excited to crack down on the rest of it and see what I came up with.

Have you seen anyone else’s footage?

Just from the trips I’ve been on. Nathan alone, that dude is the best bike rider in the world. His level of riding is pretty fucking amazing to watch. He chooses the craziest setups ever.

Yeah, he’ll have like three ridiculous parts out in two years. Have you chose a song yet?

I’m trying to choose one with Will (Stroud); we have a few things in mind. I’d like to use some rap song that is upbeat. Something you want to watch and go ride. What works, works, Rap works for me I think.

What’s been your favorite song so far that you’ve ridden to?

I don’t even like the T.I. song in “Let ‘Em Talk”, but it keeps going. I want my clips to seem like they keep going. I personally would never put it on in my car, but to me that was the best possible song I could have ever rode to, as far as how Navaz put it together with it too.

What’s been your least favorite?

The one in my “Stay Fit” part, or my Shook part. I’d do anything to see them re-edited with a different song, no offense to the guys who edited it. You learn from that stuff, and what suits my riding, those songs didn't suit my riding I don't think.

It was incredible how amazingly cool the group of police officers standing about 20 feet away were with Chase riding this monument in Washington, D.C.; only words of encouragement from the boys in blue. Photo by Rob Dolecki

You got anything going on with Cult right now?

Where do you see the tire sizes maxing out at?

Eventually we’re going to have those bikes you see at Walmart. (Laughter) Give it a couple of months. It’s possible. I guess I get it since the impact is so soft; you don’t even need air pressure. I just had my new frame come out. I like how that feels. Video-wise, I’m going to link up with Veesh in a couple months and do a small video again. I haven’t really been putting much out web-wise since I’ve been filming for Chapters. When you come off a trip after filming for two weeks, no one even knows. It looks like you’re not riding; that’s the only downfall filming for a DVD. It is what it is.

How do you feel that’s changed over the years?

You could be killing it on Instagram, and killing it. I’m going on 15 years with this shit. The whole concept of coverage is weird. Before you didn’t have any idea what people were doing. You could be on some real next-level shit. Now you kind of know what to expect. It’s cool that things are so constant, but kind of draining trying to keep up. It used to be you’d only film with people who knew what to do with a camera and wait for a finished product, now you pull out your phone to film a clip to put something on Instagram and call it a day.

What was your first part?

Shutterspeed 2. I had a few clips in the first one too. I was just a kid; some clips I was like 15 in that part. After, Darryl Tocco put out “Bad Timing” and that changed all our lives pretty much.

Where's the "like" button at? Heavy hop to high drop in the 'hood. Photo by Rob Dolecki

"Now you pull out your phone to film a clip to put something on Instagram and call it a day."

Wheelie celebration of CD's move by a local crew in D.C. Photo by Rob Dolecki

Do you plan on doing a vlog anytime soon?

(Laughter) fuck no, No offense to anyone, but I would never draw someone into my life to the point where they didn’t have their own. I don’t understand that shit, but I guess I’m getting old. I rather just put footage out; I'm not gonna make you watch me eat lunch.

How do you feel about Rodeo Peanut?

People think I get so butt-hurt by it. Anyone who knows me knows I will give myself shit, I hate myself, I don’t take myself serious. People need to be called out. But keep it jokes, I don’t have a problem. The times when it’s blatant disrespect and you can tell they have a problem with this kid. I don't like that; like don’t call me a pussy, I'm not a pussy, I’m not scared to speak up. It’s more a pride thing. Keep it jokes and I’m cool with it.

The comments can get entertaining, and absurd.

Some kids are so fucking dumb. I have a screen shot of a DM where a 14-year old kid tells me I hope I lose my kids, and “Rodeo Peanut for life” after, I had to son this kid for like 15 minutes until he realized he was out of line. I get death threats over a double-dribble tailwhip. Kids will come at you for any reason, things they know nothing about too. I laugh at the shit that’s on there. I crack jokes and hate on things too but I try to keep it to myself.

He's my best friend. He really looks up to me and loves me and I never felt that. He gets bigger by the day. He cracks jokes and tries to rap. He starts real school soon.

Any plans in the near future?

I’m working on a little promo thing for my Animal sprocket with my buddy Chris. I’m also going to go out to Cali to do some stuff with Cult and film with Veesh. And finishing my Etnies "Chapters" part.

Pot of spot gold find just over the Delaware River in Chase's Liverpool of the U.S. Photo by Rob Dolecki

Is it possible that those hops whips just got even smoother? - More Info 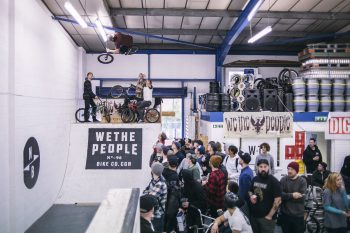 You Couldn't Organise A DIG Jam In A Brewery! 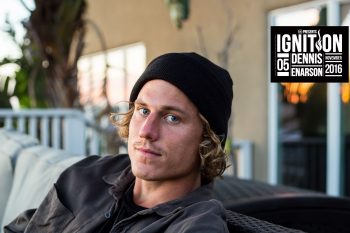 "There have been some really dark times for sure..."