Intro and photos by David Leep

Maybe chalk it up to facial hair admiration/envy (I’m about as hairy as a baby seal) or Dylan being a genuinely down to Earth and nice human, but here is yet another guy who keeps the BMX stoke high. Dylan has recently made the move from Milwaukee, Wisconsin down to sweaty buttcrack Houston, Texas and I wish him all the best. I'm gutted we didn’t get to shoot more, but someone bump him and his 'burns up to a Pro team already. Here are Ten Things of note which will hopefully help you get to know Mr. Sideburns himself, Dylan McCauley

"Milwaukee has been my home for the last 4+ years, it’s so, so, so good here. It’s underrated and I hope it stays that way. Going to miss this place!"

"Coffee is like BMX, so many possibilities, so many trends, so many Vloggers... joking. I'm just a coffee nerd."

“I just do grinds and spins and more grinds.”

"Most people think I'm goofy footed, haha. I'm just an average dude riding left foot forward and spinning naturally to the right. I do love switch shit though, it’s basically all I do. I don't fuck with barspins. I just do grinds and spins and more grinds. Recently I saw a photo of Nathan Williams doing a switch footed switch hanger down a rail, that got me pretty inspired to try some switch footed switch grinds."

"1998 Volvo v70xc aka Maggie 3.0. I don't know much about cars, but I do know that I’ve taken Volvos through hell and back 3 or 4 times and they just keep chugging! I guess you can't go wrong with Swedish stuff."

"I guess you can't go wrong with Swedish stuff."

6. Squatting With Dirty Dan And Cohl

"Where do I even begin. When I was like 17, I had been coming to Milwaukee a lot, I met Cohl and he had said he was looking for a roommate. Well, it ended up being me, Cohl and Dirty (living) in this room—small ass room. We were definitely squatting. Man it was rough back then, living in a not so good area at the time. It was definitely an eye opening experience and I wouldn't change it for the world! Just ask those dudes about cheerios..."

"As I'm writing this i just got done driving 753 miles with no shoes or socks, try it one time, it feels really good!"

"I’m one of those kids that grew up on the wrong side of the stick. Everything kind of just goes wrong for me, ha ha. It was always just me and my mom, living where ever we could live, so we never had money, we never really had anything. When I was younger I never had any money for a bike, neither did my mom, but my Moms BF at the time did. He got me a DK General Lee from Scheels for Christmas! Forever after the moment, my whole life changed… that was the one and only thing I had and that I cared about! What if that dude would of got me a skateboard instead? That would of sucked. That bike was my saving grace, if it wasn't for that bike I definitely don't think I would be here today! Crazy that some small metal object can have such a good impact on someone, I'm very thankful for that."

Much jibs going down here. Lemme break it down, son: Feeble to switch 180, to switch feeble Indian, to regular feeble hard 180. Disregard that wee cunt in the background blowing out the shot.

“What if that dude would of got me a skateboard instead? That would of sucked.”

"I was out side of a BP gas station right by where Mark Hilson used to live. I think i was doing 180’s over parking curbs… this random dude, at the time, comes up to me and says, “Just keep riding man, don't stop.” He said something else and i can't fucking remember what it was...  anyways i was watching some video can't remember where i want to say it was props or something and i saw BK’s part, i was like holy shit i just saw that dude the other day at the gas station! None of my friends believed me, then the next day I asked Mark Hilson if he knew BK, he said, “Yeah dude, the other day he was just over here!” BK will always be a huge influence on me! "

"Springer… anyway, Mark Hilson doesn't give two fucks as long as he is having a good time! That dude knows how to live and build amazing skateparks!"

“Coffee is like BMX, so many possibilities, so many trends, so many Vloggers…” 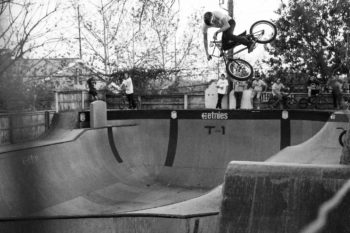 Clint reflects on his time riding the wooden paradise of Deah... 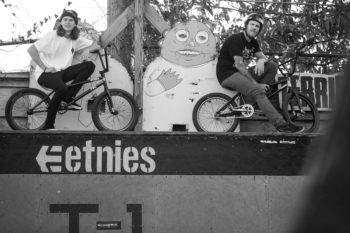 The Duganator talks about good vibes and figuratively growing up amidst some legendary Skatelite...