With the worldwide premiere of the highly anticipated etnies 'Chapters' DVD going down at the Berrics in LA today we're kicking off a week of content from the making of etnies' third full length production. First up we've got this re-print article from DIG 99.5 from our man Fred Murray. Look out for lots more to come and an exclusive limited edition DIG x etnies chapters DVD book coming soon!

There I was, on a flashback to myself at age 14, sitting cross-legged in front of our new, huge (for back then) 20” TV watching Taj and Roscoe manualing that picnic table, with Shellac’s ‘Doris’ churning unnervingly in the background and my mum asking if it’s “nearly done”. It sent shivers down my spine. In reality, I’m actually sitting in a German schoolyard over a decade later shooting a photo of Nathan Williams for the new Etnies DVD. I couldn’t believe it. I was actually asked to be involved (if only a tiny part) in the updated version of the one thing that kept me awake at night as a kid.

Ben Lewis - School yard threader feeble to hard 3 in Frankfurt. Big thanks to the Ciao Crew who showed us all the gems that week.

This was a battle but the one he took was buuuuuttery. Nathan brings the tech.

This trip to Rotterdam was a riot and every day seemed to end perfectly, just like this. Fat, sticky and aluminium – not the best, but Nathan Williams doesn’t care.

"No matter what, Etnies ‘Chapters’ will leave its mark, just like ‘Forward’ and 'Grounded' did..."

It’s not very often that I get nervous using a camera these days, especially when surrounded by good friends, but this just put the shits right up me. Everything that day seemed like a much bigger deal for me – I wonder if the other guys felt the same? I never mentioned it though. I felt like the loser kid at school who somehow found themselves at the cool party and everyone turned out to be really nice. No matter what, Etnies ‘Chapters’ will leave its mark, just like ‘Forward’ and 'Grounded' did and I can’t wait to get that same buzz another 15 years from now when watching it. We’re a new generation, a new era, able and privileged to follow our inspirational forbearers.

Benny L is not scared, so the only reason he ever visits church is for a wallride pullout over a bench.

You can’t stop this guy when it comes to a halfcab. Nathan Williams - Rotterdam

"I felt like the loser kid at school who somehow found themselves at the cool party..."

The casual nature of Nathan’s riding can sometimes catch you unawares when your job is to document his ludicrous abilities on a bike. This was just one of many things I witnessed during the filming of ‘Chapters’ that blew my mind. Manual to massive oppo 180 gap like it was nothing. This was our last day in Frankfurt and that square was the scene of our after party that night.

Despite the distraction of a giant bikini clad Macedonian posing her way through Frankfurt’s streets, Nathan focussed in and stuck this precision rail ride 180 bars to start a line. As a photographer it’s the worst when you’re stuck on the ground pretzeled around a rail and can’t see the last bit of the line round the corner. Just listen out for the “Yeaaahhhs!”

Nathan has some super heavy quality control so sometimes you don't always get the response you're looking for on a footage / photo check. It's an admirable personality trait. You'll never see a sketchy clip of this guy! 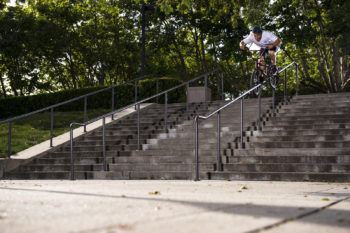 BSD In The Streets of NorCal - Photo Journal

Taking on the Bay area with BSD 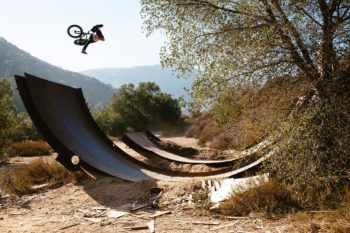 Diary Of A Skate Photographer