Look Both Ways - Filming a video part in the Real World

When Taylor Thompson told me he was working on a split edit with fellow Milwaukee Madera homie Julius Carrasquillo, I thought: “Really? We’re filming a Madera full-length and shit is getting tight…where will you find the time?”

That’s not because I doubted Julius or Taylor’s abilities, but rather because we were collecting final clips for a DVD and those two dudes were far away from our filmer Grant and thus had less footage than the rest of us. I was worried that splitting footage at such a critical moment might hurt the full-length or make for a less-than-spectacular edit.

But, that is not how these dudes roll. The thing to understand about Taylor and Julius is that they will go hard, no matter what. Filming with an iPhone and a homie filmer? Ah well, they go hard. Dark, cold, and getting kicked out? Ah well, they go hard. Just busted ass filming something crazy for the full-length? Ah well… you get the point.

In the end, these dudes captured some incredible footage. And they basically decided - If it's filmed 1080 by a real filmer: then it's going to the DVD. Anything else: save for the split edit. And recognizing that they were going to need some help making the homie footage look good, they took their banging clips to Jeff Klugiewicz for cleanup and editing.

At this point, I think you may be expecting a pretty shitty edit. But the truth is, I am telling you this story because if I didn’t, I don’t think you would be able to tell that this was filmed on nights and weekends, by the riders themselves and their homies, with less-than-great cameras, and all while these dudes managed multiple jobs, kids, and the real world of a semi-sponsored BMX rider.

Take a look at what hard work and dedication looks like and don’t dare say that the adult-life has to stop you from riding like a boss, ever again.

We asked the dudes a few questions about this project…

What are some of the challenges that life threw at you while making this?

Taylor: When it comes to BMX there always seems to be a few consistent challenges. Julius and I both work full-time, so our main challenge was time. Working first shift gave us the opportunity to link up in the late afternoons and ride until we were either too tired or beat up, ha. We made riding a priority and fit into our weekly schedules time to film and progress. Once fall hit, light became an issue and we had to work with the light(s) we had to get the footage we desired. Security also become a challenge for us throughout the entire project. Several times, either Julius or I would be 30 minutes into almost landing a trick and security would be all over us. I’d say it was about a 70/30 split. 70% of the time you get the boot, but 30% of the time, asking for another attempt or waiting for the guard to leave would prove to work out for us! The usual physical injuries (ankles, back, hips) also limited us, as well as a fair amount of bike issues (flats, spokes, pegs, etc.) held us back from a solid session from time to time. You take the good with the bad though, and that’s exactly what we did each time we met up.

Julius: Throughout the process of this project the challenges we faced were mainly the dark. We used a lot of lights towards the end of filming for this video. It would be 6:30-7:00 and it would be close to pitch black outside . A lot of the super dark night clips didn’t make it, but it was fun and challenging to do them anyway. Besides that, minor injuries and bike malfunctions were common.

"When you ride with the same person enough you learn what they like to ride, what they consider a spot, and what kind of tricks they’re good at. I ride left foot forward and Taylor rides right foot forward, so we never argued about spots."

Why did you choose to make a split edit?

T: Why does anyone choose to make an edit? Ponder that for a moment. I think that its the passion and curiosity for BMX, or really anything in life. You learn new tricks or maybe you perfect your favorite trick or finally play that song on your guitar without missing a note or pinching a fret; its being able to capture this moment in time in your life. That’s why filming, editing, and producing something to watch is so awesome. Being able to capture the sessions Julius and I have really seemed to drive us beyond the fact that others are going to be able to see what we do and who we are. We both noticed how much we pushed each other when we rode together and the riding was really organic, which led to the idea of creating a video together. Jeff Klugiewicz also played a massive role in the split edit coming to fruition. With Jeff in the mix, everything artistically really came together, so big thanks to him!

J: As some people know, Taylor lived in California for a couple years. While he lived there I went on a BMX vacation with my roommate at the time, Max B. We went to visit Dan Kruk in Long Beach and obviously stopped and spent a few days riding with Taylor. Years later, he moved back and me and him hit it off again; riding every other day together even though he lived 40 minutes from me. So we were just good friends who liked to ride together and push each other. Once we started filming it was clear that we wanted to make a split edit.

How do you communicate about spots/tricks as a duo? Do you guys ever argue about who gets a spot or trick?

T: You gotta Look Both Ways at every spot you go to! Julius and I are opposite sides pegs, so it just comes natural for us to have different ideas everywhere we go. We both have specific obstacles and areas we like to ride, which I think is a given for most riders; but what made it so fun is that we can take the adventure together to find the new stuff. Communication definitely goes a long way when you are working on a split edit. We both had our lists of specific things we wanted (been wanting) to do which made things easy for us. Keep in mind we live 40 minutes away from each other too, so communication helped with making plans to hit Julius’ area one day and mine another when we could. Taking trips to new states, cities, industrial areas was more of a gamble, but we always seemed to have a knack for finding a ton of stuff.

J: As far as spots, we're both spot hunters and had things in mind. When you ride with the same person enough you learn what they like to ride, what they consider a spot, and what kind of tricks they’re good at. I ride left foot forward and Taylor rides right foot forward, so we never argued about spots. I would go to a spot and call something out for him and vice versa. Although we have some of the same tricks, there’s a lot of things Taylor is good at that I’m not and vice versa.

"Rubber necking constantly in the car is a habit for BMX riders, so honestly we found a ton of spots that way."

In an area that is pretty tapped out sometimes, what is your process for finding spots?

T: Search, search, and then search some more. Most of the time we have an idea of an area we want to go check out--a new school or an industrial complex or whatever. Those seem to always be the best areas. Downtowns in new cities are always cool too. Rubber necking constantly in the car is a habit for BMX riders, so honestly we found a ton of spots that way. Familiar spots can definitely feel tapped out from time to time, but you look at things differently each year as you progress as a rider, so keeping an open mind on every spot we roll up to helps us stay hyped on what we have. Just go find a damn alley and pedal down it already, ha!

J: Like I said, we’re both spot hunters so we keep our eyes open for new things being built and old spots being modified or even redone (making them a better spot). We would go through industrial areas and construction sites to try and find new spots, even if just temporary. We would drive around with our bikes in the car and not even pull them out. We would just search every alley and crevasse we weren’t familiar with. It does get hard though with so many years of clips being filmed around here, but one phone call and you’ll have a whole list of which tricks have been done on a spot and which haven’t. Also, there is always watching Milwaukee skate videos--those guys got spots!

Why do you go hard, all the time, no matter the circumstances?

T: I want to fight fear and riding a BMX bike gives me that feeling of perseverance. The love of BMX burns deep, so keeping that fire lit is a must for me. Being able to watch others progress and overcome their obstacles also drives me to ride harder all the time. There are way too many Midwest shredders to list right now, but seeing everyone kill it out here gets me so stoked. Julius has the same mentality as me and the dude is just an overall savage on the bike, so I’m always hyped up when we ride together. Its easier to push yourself when you know you have someone there that believes in you--you can face a ton of circumstances as a rider, take everything in stride, and just keep grindin.’

J: Man, it’s just the love for BMX and doing fun/scary/hoodrat shit with your friends. When you have a guy like Taylor who is so determined and hungry, it’s easy to match his energy and throw down with him. I chalk all my BMX “success” up to all my homies; ones who I ride with everyday and others that I only see in person a couple of times a year. The BMX scene around me is amazing as far as I’m concerned and my friends are who push me to be better. 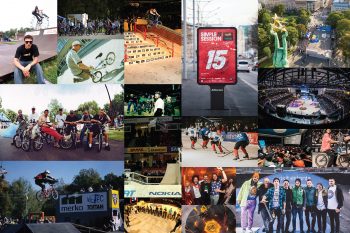 "I don’t deny it gets a little difficult sometimes" 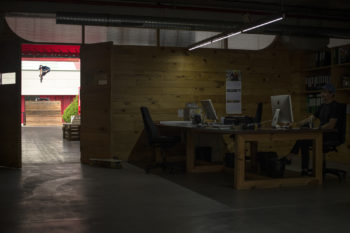