Let's face it, in this day and age it's pretty difficult to get lost, and if you have some sort of cellular device, near impossible. However, this doesn't mean you have to lose the thrill of the adventure. As often with any international bike riding holiday you can take the easy route and venture through your phone book in search of a connection and spot guide in said city, or as the modern traveller would now do, post a question on your social media while putting minimal effort into any fact finding of your own.

This time, we left the button bashing and relied on the old fashioned act of the spot hunt. You've got to lay your markers and find the lay of the land. First point of call is usually to locate a hill, as for hills mean spots, but if you've ever been to or even know anything about Hamburg, it's as flat as a pancake. In this situation the more intellectually inclined would pull up a map of the city and decide on a variety of factors and thus select a route that made sense. We were not that way inclined however and took the title of this Monster Energy X DIG series a bit too literally. Hamburg isn't easy to navigate even with a faint sense of direction. With the mass WW2 bombings of Hamburg reaching it's pinnacle in 1943, the city was left devastated and much of it has been rebuilt since, and they definitely weren't shy of using a brick or two. This is all very interesting but can give the impression of everything looking like a clone of the other. Combine that with more bridges than in Venice, Amsterdam and London put together and you've got one confusing journey on the cards as soon as you drift from the waterfront. In addition to the the high volume of pointless pedalling we also encountered our fair share of German showers, and i'm not talking about the version you might find on the internet late at night. It rains a lot there. Thankfully though we managed to book a place to stay that looked onto a free indoor skatepark that would prove very helpful during the boring wet days.

As for the crew on this first Lost In trip of 2018, we called upon the skills of TBB-Bike's barspin and tailwhip Instagram sensation Jiri Blabol, another TBB young recruit Raul Jula, Monster Energy's spelling-B nightmare Jason Eustathiou, DIG friend and Glaswegian handrail hanger-on Greg Layden, and finally the Czech technician and TBB vet Michal Smelko. The dream team you could say.

Here's how it all went down...

It's always the way... you're all done for the day, heading back to your apartment as the sun dips away, when the best spot of the day rears its head. Jason couldn't leave without saying what's up with this rail hop to fast 540. Guaranteed we would have been kicked out of there during the day anyway.

What else are going to do when you're visiting the International Maritime Museum? Proper-ller sight seeing if you ask me. (sorry)

From a photographic sense Hamburg was awesome. It's look is like a combination of New York and Venice combined with any other German city. In 1943 Hamburg saw an enormous amount of bombs drop and it devastated the city and you can still see many signs of it to this day. Raul swings into a perfect flat ledge under one of the city's many bridges.

Jason managed to pick the perfect time of day for this hard 180 over the rail. However, he managed to pick a bit of grass for me to manoeuvre which appeared to be the epicentre for dog pooping in Hamburg. You gotta take the stinky with the smooth.

"as the modern traveller would now do, post a question on your social media while putting minimal effort into any fact finding of your own."

I'd been here before on another trip and knew of it's security issues. When we arrived this night the light was going down and Raul wanted to barspin over the rail into the bank, and I could already envision what was about to happen. He's up there ready to go when the ghoul-faced security guy came out, his knuckles dragging on the floor, and as usual came straight up to the guy with the camera - me. I murmured something about not even knowing that guy on the bike but the big flashes 30 feet to my left and right clearly gave me away. Despite a sly attempt at blocking my photo, a quick sidestep and some photoshopping removed old potato head.

This day really was a case of Lost In Hamburg. Our plan was to pedal out towards the suburbs of the city and after some hefty spells of pedalling we ended up near the airport! After a lot of bridges, open green spaces and water stops, we found two ridiculous spots side by side, with Smelko taking care of this crook.

Smelko had a nightmare with punctures on the last day.

Multiple patches and some cross-city bike shop hunting later and we were good to go. You gotta feel sorry for someone when they get the misfortune of a series of flats and all they want to do is cruise with their mates.

Jiri is a fireball of energy - he literally never stops all day and then seems to hit empty in no time. Drive-by on the way to another spot, until 20 feet down the road Smelko got another flat.

Smelko has a massive, heavy bag of tech skills and this was the perfect setup to unload some weight. Ice, manual, feeble, backwards smith to indian, before...

"Look son, I don't give a fuck about your 100% thermo-polymer Egyptian thread plastic stunt nuts."

Greg is a bit like a stealth bomber. Silent for large portions of the day, slipping under detection, until BAAMMM! Oppo-hanger through your house. I'm pretty sure Greg kicks off a bit more smoke though.

"In addition to the the high volume of pointless pedalling we also encountered our fair share of German showers, and i'm not talking about the version you might find on the internet late at night."

Greg handles a mean kinker with a buck tooth. A speedy entry and the gap off the flat. Sorted.

Jiri nearly let the mind-wheels spin too fast and a meltdown was on the cards. He couldn't keep the feet on the pedals, but soon shrugged it off and grinned at the crew. You can't make this guy mad for long.

It took a while but the bar ice hard-180 happened. Jiri may have let his bike reach the outer atmosphere for a minute of two but she came in for a smooth landing in the end.

If you don't like a play fight, don't mess with Jiri Blabol. He's just a big harmless bear though...

I think the whole crew may have gone in on this delightful setup on the edge of town. Jason chose the hard way with this one.

If you like riding bank setups, Hamburg has a lot to offer you. Jiri will ride anything, and in most likely cases, far better than you. He'll even drive his car 150km a day just for fun - no shit, just ask him.

Smelko-pops played the doggy-doo-doo dance with this high speed oppo pegs 180 in a nice little park in the student area of town. 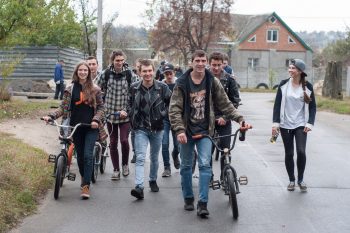 Wildin' In The Ukraine

NFG by the wildest crew in Eastern Europe... 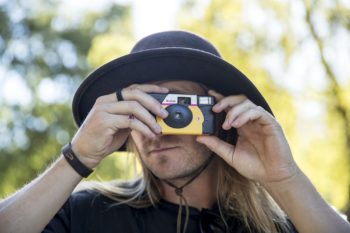