Wildin' In The Ukraine

NFG by the wildest crew in Eastern Europe...

When I first visited Ukraine four years ago, I knew nothing about the riding scene in any part of the country, other than one rider in Kiev, whom I had befriended via email. After meeting and hanging out with the Urodi crew for a portion of my visit, it quickly became apparent that between their camaraderie, carefree demeanor, and no-fucks-given attitude, they were a group of riders I wanted to see more of. After watching 'Уроды 4’, that one hour's worth of a raw, unfiltered glimpse into their world made it very clear they know how to have a good time, both on and off the bikes.

After three years in the making, DIG is proud to present the Urodi crew’s latest video, “Fuckers Five”.  As a bonus, the main filmer/ editor/ ringleader Anton Maslov gives a little insight into the production and his group of longtime friends.

Anton Maslov and quite a gem. "Get ready for a few tries and unexpected crashes, when the rainbow is round enough to let your bottom bracket substitute for your back peg." -Anton

When did the first Urodi crew video come out?

Anton: The first video came out in 2009, and was something kind of a joke. I was the only filmer, but when it came to editing I just called my friends who had a part and we pretty much randomly threw clips onto popular music (from Soviet ones to Ricky Martin) while drinking cheap wine and having a good laugh. The last and only section of Anton "Antik" Kutafin I edited by myself, because everybody else were already sleeping that moment.

How did the video name come about?

Well, our crew is named Уроды (Urodi), and that can be straight translated to “freaks” in English. But we’ve never translated it cause it’s not the point. It is more about being strange and being yourself and doing what you love. Once we were in a train back home from a trip to a very small village, one guy randomly started whispering in his dream "Fuckers five, Fuckers five". Due to the fact that the guy didn’t know English at all was one of the reasons to use that name for the video. And it sounds good too, ha ha.

Where are the majority of the riders from?

Most of us are from Kharkiv, Ukraine. Through the years plenty of guys moved to Kharkiv and took a big part in our funny process. Some of them moved away to different countries and even started a BMX-rider career, and I’m very stoked on that to be honest. Still to this day it’s crazy for me to realize that, for instance, two brothers from small village who grew up riding bumps and grinding 15cm diameter flat rails became one of the most well-known street riders on former Soviet Union territory, and even have a worldwide recognition. At the same time some of my friends created families, started their own small companies and I can’t help but think that these paths are very good and cool as well, you know.

How long did it take to film "Fuckers Five"?

We started filming "Fuckers Five" in January 2015, and finished in December 2017. So it took three years, and a lot has changed since the beginning. Our previous video was also filmed in almost three years, but with much less changes in our lives. Some changes are simply visual ones, but those who know, know. Plenty of people found (or lost) themselves, and my own outlook has changed too. No regrets about that- time flies, but we continue doing what we do and love.

True. What’s the plan for releasing the video?

There will be no DVDs or digital download for sale. I can’t take money for it and nobody is in it with me for such benefits. One of the main things about Urodi is to have fun with what you have, enjoy your surroundings and give to BMX, not to take from it something more than joy of riding together. We filmed most of the stuff in outskirts, small towns and villages while living in the cheapest houses and traveling the cheapest trains. What I really wanted to do is a crazy live premiere in Kharkiv with rock concert, dances and old friends coming together to share the moment. It’s already happened and everybody went nuts there. Then I wanted to share video, photos and some stories through the website that I personally dig. So here we are. Huge thanks to Rob Dolecki and DIGBMX.COM!

What has inspired/ continues inspires you and the Urodi crew?

Can’t speak for all the guys because each one is an individual, but that is one of the points - diversity. There are no two same guys here. I’m so inspired by my friends on and off the bike that I pretty much don’t watch videos or vanish in boundless Instagram flow. Of course, some classic Aitken footage or street surfers like Mark Gralla, Steven Hamilton, Horegumi, and AM:PM gentlemen never get me down. However, I get more inspiration in non-BMX things - movies, photos, music, people and nature. When it comes to riding, Urodi crew is about to take trips to places where you might not find a single spot and still have the best of time, not in the best conditions.

Why does it seem like many of the people starring in the videos have little regard for safety?

Many of riders here really do not care about their personal safety, that’s a fact. Maybe that’s because you want to get to the maximum point in risky stuff. We do not argue that wearing helmet is a good idea, but it might be that we are just not about good ideas in riding at all. But I realize that we create an image and are responsible for it. So if I could add helmets in video editor, I would. Kids, wear helmets.

Anton Kutafin has such an awesome classic style. As a person and rider, he doesn’t seem to care about anything trendy, and just does him. How long have you known Anton, and what are your thoughts on him?

Anton Kutafin is a true Jedi of BMX. He is actually the reason why lots of people started riding in Kharkiv (myself included) without doing anything for it. Sometimes it is all about looking at someone with smile on his face while doing his thing. I've known him for over fifteen years because we studied in same school, but I started riding BMX with him later in 2006. Throughout the years he never stopped focusing on riding, and I might say that no other thing in life excites him that much. Off the bike he’s just a simple and funny guy, though he is a very intelligent person who really knows a lot. He’s like that man that can be good at anything, but he chooses BMX over everything.

Being in the Ukraine scene for over a decade now, how do you see it changing/ evolving?

Ukraine is a pretty big country, and I can’t speak for the whole scene. Some cities have tight scenes, some don’t. I’m trying to share as much passion for BMX in my hometown as I can, and thankfully receive a lot of help from my friends. We build dirt jumps, make street jams, and participate in a DIY indoor skatepark owned by our crazy friend. Last year we had several events each month and that’s very exciting. Moreover, no big companies here are helping and dictating us- we can do it our way.

Do you get to see the Bespaliy brothers at all, now that they live in Russia?

Recently Max and Igor started visiting us more often, and were here on Fuckers Five premiere too. We never really missed that connection, even without seeing each other for years. Friends will be friends.

With some riders moving to other areas and/or not riding as much any more, do you have any younger riders joining the crew in the last few years?

There are only a handful of "old" guys left. Urodi 4 had like 30 men in it, but Fuckers Five has around 100. For me the best thing is that older guys don’t leave the scene after quitting BMX. We do not ride together but remain good friends and always have something to talk about in different aspects of life.

Dicks Six and Suckers Seven, ha ha. Actually that is not just a joke; no big projects for a while. Hope to film a sequel for our 2010 "Spring" video called "Spring 2"; I'm willing to go to Kiev with Anton, Bespaliy brothers and all the dudes who will be down to go crazy in a short amount of time. Kiev is an outstanding city and can become a real BMX Mecca. I talked about it with Anton once, and we both agreed that even BCN is not that good, for those who really like to look for spots and enjoy it raw and crusty, of course. Outside of video projects, we have some ideas about interviews with guys who don’t ride anymore and found themselves in something else. I get to see young guys that quit BMX and haven’t found anything instead to keep that energy spreading positively. It’s a destructive process to say the least, and I want to show them that life doesn’t spin around BMX. BMX can be used as such an interesting tool to open the world, make friends, keep your body and mind together. But if you don’t like BMX anymore it is not a problem, just go and try something new: sports, arts, hobbies. I feel like my responsibility for younger kids grows each year and I have to listen to myself more, try new things and be a good example, you know. There are things in Fuckers Five that I wouldn’t show to my little son, but one of the points is to show diversity, like I said before. Some guys drink beer, some drink water or coffee. Some guys are not well-behaved; some are very calm and kind. That’s how it is.

Some setups just can't be fully understood on any photo or video; we tried, at least. However, like Andrey Ustinovich here, there are still many riders who do it only for themselves and friends' good memories.

NFG by the wildest crew in Eastern Europe... - More Info 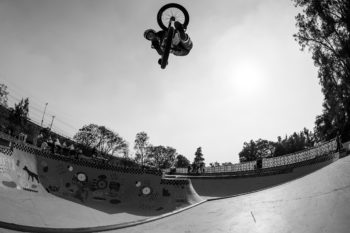 Forget the Olympics - The VANS BMX Pro Cup is back 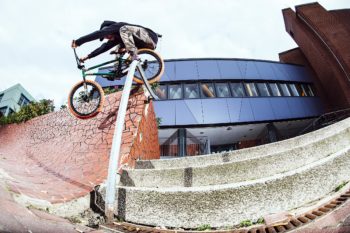