Nathan Sykes and Matt Cordova are close friends. Just reference this and this and this video. While setting up trails days with Matt, I made sure he’d bring his friend Nathan. Similar to Matt, I didn't know what to expect, but was blown away by the bike skills. Splitting his time between the upper and lower west coast, I caught Nathan in his winter home, not for from F.O.D. trails. After spending a couple sessions with Nate, I made sure to chase him down and get some insight on what makes this rider tick.

Where did you grow up and where are you currently? How old are you?

I grew up in Springfield Oregon. 25 years of age.

Why’d you make the move to cali?

I moved for the year round riding. It rains a lot in Oregon so moving to Southern California made for more days in the sunshine.

How’d you get into riding?

My parents got me into riding. My dad took me to the BMX track when I was 5 and my first race I won and was hooked ever since.

What do you ride? Why?

I ride everything. Trails, park, street. I just love riding my bike and bring my style to any place I ride.

Who were your heroes growing up? Today?

Growing up I also looked up to Dave Mirra and Ryan Nyquist. I have Miracle Boy and Nyquist on VHS and would watch that over and over again. I am also a big fan of Justin Inman, Mike Aitken, Chase Hawk. Have always loved watching those guys flow around on their bikes.

Now I still love the same guys! Can never get enough of the Style Cats. Sergio Layos, Larry Edgar, Matt Cordova, Kris Fox. Pretty much anyone throwing the back end sideways.

What do you do day-to-day?

Day to days change for me all the time. Some days I will have shows with Team Soil. Other days I will be printing shirts and sewing hats. Other days I will be digging a bit at FOD or whatever set of jumps we are riding for the day. But no matter what even on my busy days around the house working I try to get out and ride. Some weeks are full of riding all day. I love that every day is different!

Tell me about your Locals Only brand.

Locals Only Brand was a clothing company that I started over 3 years ago. As of this last month I had to close the doors on the company due to legal issues. It's been really hard having to walk away from something that I have put so much time and effort into. I can't thank everyone enough that supported my company.

Have you ever brought a girl to the trails to show off?

I brought my girlfriend to the trails a few times. I might have been showing off a bit for her! Hahaha.

Are you a healthy person? Drugs, diet, lifestyle etc.

I try to be healthy. I don't do drugs or drink. I like food, I like food a lot!

What’s the best trip you’ve been on?

That's a really hard one. I have been on some great Colony trips these last couple years. Honestly the Colony Oregon trip was so epic. Just being able to take the team to my home town in Oregon and show them around. That was such a great trip!

How would you describe Matt Cordova to someone who’s never heard of BMX?

Matt loves Coffee!!! I mean LOVES Coffee. He could be a beard model if he wanted too. And he could chill all day and just listen to music. And he wants to be a Pirate when he grows up. Hahaha.

Best feeling on a bike?

Best feeling for me would be a kickout or a 360. Can't beat that feeling.

Just did One-Footed Table to Lookback the other day. Pretty stoked on that combo. And have been working on supermans. Just playing with old tricks that I don't do often.

For sure Larry's boost button! Larry goes so HIGH!

Matt is for sure the coolest. I mean if you have ever seen him do a Nac-Nac then you would feel the same too.

I don't mean to be mean, but ledges that are barely over peg height are not my favorite.

"What motivates me the most is myself. I always have that internal want to be growing and changing."

If the apocalypse came and wiped out all BMXers from the planet but the trails and parks survived, would you still ride by yourself? For how long?

I would for sure be doing hot laps at the trails! I mean riding solo always sucks but at that point might as well enjoy the jumps before I run out of clean water! Haha.

What’s the coolest/best thing you’ve done on a bike.

For me riding with my friends is the coolest thing I have done on my bike. A good sesh with friends is best!

Contest thoughts? Which ones have you done and how did you do? This doesn’t necessarily have to be podium standings.

Contest are Rad. I haven't done many myself. I have done the Vital Game of Bike a few years. And a few Jam/Comps. I think Contest are great for the sport. It keeps guys progressing and some cases helps grow bmx. Myself personal I don't seek out Contest. I love doing filming projects and pushing myself that way.

Tell us about your sponsors. How’d they come about?

I ride for Colony, Dans Comp, and 100%. I have been on Colony for almost 2 years now. I meet Keith Treanor at the trails and we chatted a bit and that was really it. A few weeks later the frame I was riding broke and I was in need of a new frame. My friend Randy Lawrence said that he would talk to Keith about getting me a frame from Colony at a discount. It went from getting me a discount to, "Hey Nathan Keith wants to talk to you I gave him your number." Long story short I talked to Keith on the phone and he asked if I wanted to join the family. And of course I said yes!

With Dans Comp it was some talk between Clint Millar, Scott Towne and Keith Treanor I believe. It's so great being able to work and ride with these great guys. 100% was through Matt. He had started riding for them and a little bit after that I meet Russ Koza and hit it off. Been really rad working with them doing stuff on and off the bike.

What motivates me the most is myself. I always have that internal want to be growing and changing.

Tell me the most interesting idea you’ve heard about recently (not limited to BMX).

Ohh I don't know! I mean I still have a hard time wrapping my mind around Smartphones. Just wrapping my head around the fact that I can look up pretty much any information and call someone on the other side of the world all on a small wireless device that fits in my pocket. Amazing.

"I can never get enough of the Style Cats. Sergio Layos, Larry Edgar, Matt Cordova, Kris Fox. Pretty much anyone throwing the back end sideways."

A healthy dose of trails, pools, and parks - More Info

"Nothing beats kicking the back end out." Catching up with Matt Cordova 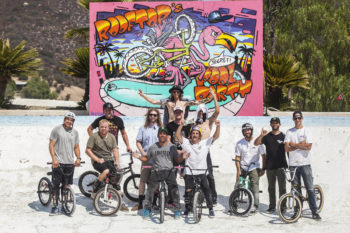