If there is one thing that full-length videos have done for us its crafted and created iconic spots in our minds. Spots are just spots but when riders or even skaters do amazing shit on them they somehow evolve into legendary or even renowned spots, their legacy galvanises.

Growing up as a kid I was always obsessed with street riding in Austin, Texas, I mean all Jimmy Levan did was jump a stair gap by a church but after that moment - that was no longer a series of concrete steps that was used to walk down, along and up, it became something I would literally fly across the world to see with my own eyes. I remember when I actually did see it I heard a "rumour" that Paul Buchanan had previously jumped it with no filmer and it made the spot even more legendary! The fact that we have stories about these architectural places that are based in cities all over the World is just amazing, it makes the hunt so much more pleasing.

The things you do for a crocodile cap.

It really didn't look good from where we were sat.

In all the trips I’ve been on as a Team Manager I am usually the one guy who wants nothing more than to go ride a famous spot, I’ll usually end up going above and beyond the necessary means to make sure I get the crew to one of these spots, even if I don’t even ride it myself.

The flinders street station rail in Melbourne was one I had seen from skate videos past. What stuck out the most was Dustin Dollin skating it at night, he pretty much flew out of what to me looked like a busy train station, down the golden rail and then into a pavement full of pedestrians. When I arrived in Melbourne I asked about the rail and found out what my nerdy self needed to know. Flinders street is a pretty busy area, the handrail – a shiny gold 11 stepper is situated on the main entrance / exit and according to the locals it was best to ride around 10pm at night as that would be way after rush hour and security wouldn’t be that much of a hassle at that time.

When you feel like you really can't get a break.

We passed the rail once on our 7 day trip around 6pm and it was hectic, I mean it was just floods and floods of people going up and down the stairs, people were sat on the steps, or leaning on the rail and it seemed like this would never be a possibility. I stood at the top of the stairs with Jordan (Godwin), another fellow fan of searching out a famous spot. We both agreed we would have to come back late to get a session in on it, we chatted a little and Jordan mentioned if a backwards crook had been done on it? I said I would check the "un-official Melbourne ABD association" and the answer was a renowned ‘Nar Mate’. Then an email came back from Paul at Strictly BMX who said there was $20 on the line if he did it switch…the challenge was accepted, mainly due to Jordan wanting to buy a crocodile cap with the words “CYA Later” on it he had seen a few days earlier and it happened to be $20.

We carried on with the trip, vowing to come back and win the bet, these famous last words are usually just words but the Flinders rail was always in our minds and usually around 3 or 4 pm every day we would mention it and make our way there, only to see the floods of people commuting back from work and we would just carry on to another spot or back to the hostel. Then on the Friday night (3 nights before we would leave) we decided to tackle this like professionals and get the job done right. We ended up rolling up to flinders street around 7pm hoping the people traffic would be fewer but it was still pretty busy and after we stood around for 20 minutes in the cold (Oz winter) we started to get the feeling this wasn’t going to happen. Next thing we know, three police officers just appeared from nowhere and stood at the top of the rail and they stayed there for at least 15 minutes. I could sense Jordan was getting agitated, he wanted to do this, but he didn’t really want the added pressure and he didn’t want to go into battle knowing he might end up in a jail cell or knocking some pedestrian to the floor. It was around this point he looked at me and said “Its not gonna happen is it”. Me being the optimist - I said, “Give it 10 minute’s yeah”?

We then started to discuss the idea of coming back Saturday or Sunday, it seemed like the logical thing to do in the circumstances. I was against the idea, not because I wanted the clip for the video like some hungry blood thirsty Team Manager but because I just know that tomorrow is never a sure bet, anything can happen and you’ll only regret that one chance you had to nail it there and then. I've been there, I've fled the scene and I've never returned.

I could sense Jordan was getting agitated, he wanted to do this, but he didn’t want the added pressure and he didn’t want to go into battle knowing he might end up in a jail or knocking some pedestrian to the floor.

We waited the 10 extra minutes which seemed a lot more like 30; Jordan paced back and forth and then, like it was meant to be the police just left, the crowd dispersed like some biblical fucking dream. Callum looked at me then looked at Jordan and said “are we on”? And just like that Jordan grabbed his bike by the top tube and started to run to the top of the stairs. Felix (Prangenberg) and Sam (Waters) were deployed into position to help divert the flow of people traffic as best they could and I was able to crouch and get a photo as best I could in the darkness of the street.  I wasn’t prepared at all, it was night, there was no real opportunity to set up and Jordan wasn’t really in the mood for having a long session.

The next 2 minutes were the fastest I’ve ever seen a single trick go down on a rail in my entire life. It took him 5 attempts and he took zero bitch runs. He just went in, went down, and ran back up again. In fact the actual time he pulled it he sort of - didn’t realize - he had properly pulled it and seemed to be in the default mode of running back to the top before he clocked what had happened. It was nailed perfectly though, the job was done, the bet was won, no one got hurt and we got the clip (and the cap).

Quick tourist photo before we dipped.

It seems like a lot right? All that effort, all that organizational mayhem and trouble just to get a single clip on a rail that to anyone else looks exactly like every other rail out there? It’s just that it isn’t, it really isn’t. BMX is a mix of fate, luck, skill and commitment but you can never ever rely on tomorrow.

I just know that tomorrow is never a sure bet, anything can happen and you’ll only regret that one chance you had to nail it there and then 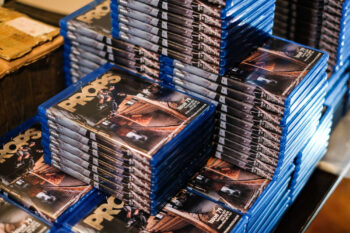 PROPS - Don't Call It A Comeback 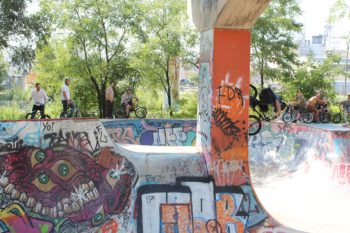