A boring, lifeless, uncultured city or one of the most interesting there is to ride in?

Story by Matt Coplon | Photos by Kyle Kisling unless noted*

In the summer of 1999, I hitched a connection in Texas, destined for Tulsa, Oklahoma. The previous summer, I was lucky enough to have spent 6 weeks circumnavigating the continental US. And of the lower 48 states, I set foot in a total of 45.

On purpose, Oklahoma, wasn’t one of them.

Unfortunately, to those who have never been, Oklahoma, as a whole, has been lumped into what its panhandle had been nicknamed in the mid 19th century: “No Man’s Land.” Basically, a flat, dry, waste-like-prairie centered almost directly in the middle of the US. And at that point, I wasn’t immune to the hearsay. Reluctant to travel to OK, the summer of 99’ held an air of pretension in me; I accepted that I was travelling to this boring, lifeless, uncultured city… I could handle it, I thought, it was only going to be a total of 4 days.

This ditch has everything you need, including a natural resi box. Russell Wadlin, can in zero shade.

It was late July on arrival. Hot. Well above 100 degrees, and the amount of cement that layered the cityscape as we prepared for landing simply exacerbated the heat index. Unlike Florida, where you feel like you broil from the outside, I would soon discover that this dry heat offers an alternative discomfort; one of being baked from the inside.

As I was picked up by my girlfriend (A Tulsan, who I would marry 12 years later), the first thing that caught my eye as she drove us down the Broken Arrow Expressway, was the amount of ditches cut into that heat reflecting cement. So many that, years later, after meeting the local riders, I’d discover that they gave up sessioning most because there were just too many to choose from. And so it went with flat rails as well, littering the side of each road on the Tulsa grid. At some point, you become desensitized and just stop paying attention I guessed…

On the other hand, for me as a Floridian, it was something I couldn’t stop thinking about.

If there was a utilitarian architecture that signified Tulsa...there you go

"Unlike Florida, where you feel like you broil from the outside, I would soon discover that this dry heat offers an alternative discomfort; one of being baked from the inside."

Over the past two decades (having rolled back those two, aforementioned personal strikes within the first afternoon of my original visit) I’ve been consistently expressing (quite possibly to the level of annoyance) my love for this city. And to those not turned off by my overzealousness, they’ve asked: “Why Tulsa?”

The people, first and most importantly. Sandwiched within the geographical grey area of the Mid and South-West, Tulsa folks have an easy going disposition like no other, captured in the catch phrase (and hit country song by Don Williams) “Livin’ on Tulsa Time.”

And that includes the family I would eventually marry into; all Tulsans, who brought me into their clan, and, by default, made Tulsa my second home.

Secondly, Tulsa (as a very anecdotal addition to the city’s most intrinsic (and contested) history: its inception having been split within the Creek, Cherokee, and Osage nations, all of it situated on top of a vast oil field) quickly built itself upward with some of the most incredible Art Deco architecture. Then, soon after, into the 20th century, became a major tourist stop while driving cross country on historic Route 66. This combination of fin-de-siecle architecture mixed with iconic, mid-century, middle Americana, has left Tulsa one of the most interesting cities to ride in.

And that part, always the most difficult to express in words, is left best to be explained in the media included here...

Small window on this spot. And this tree wasn’t even part of the actual spot. Billy Woodfin, asphalt bump to fakie.

Day One, Spot One. A graveyard of about 20 full pipes. Hell of a way to start the trip. *Photo by Dillon Leeper.

"...years later, after meeting the local riders, I’d discover that they gave up sessioning most ditches because there were just too many to choose from."

Quite possibly the best kinker in the continental US. Late hanger tooth via Billy Woodfin.

Last minute decision at dusk. Dillon Leeper on the flash, Billy Woodfin on the tree branch, Matt Coplon over the fence.

The night before I left on my most recent trip to T-Town, my wife and I stopped into a Sprint store to get some tech support. While waiting, the technician made small talk and asked where we were from.

My wife, concentrating on the resetting of her phone, jumped in after a long pause so as to not seem rude, “I’m from Tulsa. Tulsa, Oklahoma.”

“Really?” The tech chimed in, “Oklahoma, huh? Well, I understand why you left.” She quickly looked at me, smirked, and asked the tech, “Have you ever been?”

The master taking a break from his craft. Huge thanks to Kyle Kisling for his documentation along the way.

One of the many amazing parks that have popped up in the past decade in T-Town. 180 Euro via Dillon Leeper.

No speed, terrible angle of trajectory, all while riding through poison Sumac. Billy Woodfin somehow made this nose happen.

Thanks to Russell Wadlin, Aaron Anderson, and especially Ariel and Lucy Gunn, and Kyle Kisling, for continuing to make Tulsa one of the most enjoyable cities to travel to. - MC

Exploring the innards and outards of T-Town - More Info 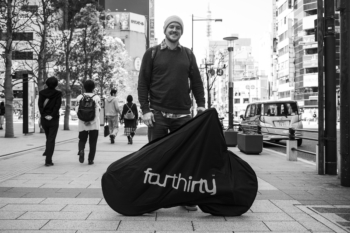 "BMX is never just a job for us; it's our lives." - An Interview With Van Homan 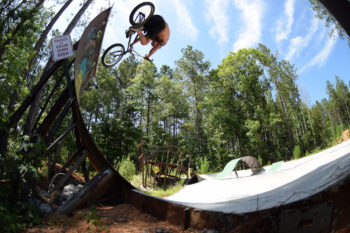