Nine years can be a pretty significant age difference when it comes to siblings. It’s just large enough where you might have more things not in common than in common — from musical preferences to hobbies. In BMX terms, nine years is almost an entire generation, where these days, the differences can be some older street dudes who swear by metal pegs and cassettes versus the typical choice of a new generation, which can lean towards plastic pegs and free coasters.
Yet Shane and Dillon Leeper seem to have personified the “age is just a number” saying, and theirs is a relationship more akin to one with just a small fraction of their age gap. They are daily riding buddies, travel companions and (until recently) roommates. It’s a bond solidified by blood, and strengthened through bike riding.

I'll start with some basics- how old are you guys?

I didn’t know you were that far apart in age. Where do you both live?

How old were you when you started riding, Dillon?

Dillon: I was like seven. I had a sixteen-inch Mongoose Shane built for me, with four Stogie pegs, a Kink Fat Boy chain and like a 35-tooth sprocket on it- the sprocket was almost as tall as the stand-over height. I literally couldn’t bunnyhop that bike because it was so heavy as a kid; I just rode off things.

Young Dillon sending it an a bike that was almost the same weight as he was. Photo: Reese Murtagh

Where did you guys grow up?

Dillon: Yeah. At the time we were growing up in Fredericksburg, we had two parks in the area. We had Curtis skatepark and Brooks skatepark. Randomly, when I was in like fourth or fifth grade one day, Shane heard that Robb Tibbs, Edwin Delarosa, Jeff Z., and Jim Cielincki were stopping in town. I got pulled out of school early that day, and we got to ride Curtis Park with all those dudes for a few hours. It was badass!

Who needs plastic? Shane putting his metal pegs to work on a real-deal steel and un-waxed concrete combo setup.

"At first, it was kind of annoying to be sixteen or seventeen and having to look out for a kid. But honestly, all we did was ride anyway."

How did it work with you pulling Dillon out of school?

Shane: My mom had given me some sort of power of attorney, since we did so much together. It was maybe once a month.

Dillon: And part of it was because I have a blood disorder, so whenever we went riding and if I ever got hurt, he was able to give permission for medical procedures.

Shane: I worked at a bike shop, and would have like a Thursday and Friday off, go to DC. We wouldn’t get going until after noon, so Dillon would go to school for a half day, then that was good enough. My mom was pretty lean; as long as we weren’t causing trouble we could do what we want. Our old man passed away when I was sixteen.

What is the story with your blood disorder?

Dillon: My blood doesn’t clot as fast as most peoples’ blood. But honestly, it doesn’t ever bother me too much. Being in martial arts as a kid, it taught me how to be agile and in a sense taught me how to take falls. I would say it makes me a little cautious on some things that I come too. But honestly I just keep rock ’n’ rolling and try not to worry about it.

How do you think that affected your outlook in general?

Dillon: It doesn’t really affect me, We’ve been traveling the United States heavy for the last ten years. I've seen some of the most amazing places and met some of the nicest people just because of riding bikes. I’m only 24 and travel as much as I possibly can, I do my best to keep my bills as cheap as I possibly can so I can up and go as I please when a trip comes up without having to worry about to much. I hope as I get older it only picks up more. I see people like Matt Coplon, Steve Crandall and a few of the OGs we ride with still killing it and that inspires me. I know if they are still getting it, there’s no reason why I couldn’t be killing it like them. I know no matter what, I will always travel with a bike.

Shane: Don’t even let him talk like that; he’s got a dialed house. He’s way more responsible than I am. (Laughter)

Dillon: That’s because of My girlfriend, She’s got a good job and hooks it up with a lot of stuff at our house. Which is awesome; I cover my half of things and the rest of my money goes to the next trip.

Dillon didn't quite get this wallride gap over to double peg as well as he would have liked to, but getting his pegs on and rolling away was still pretty damn awesome. George Bush approves this message.

"I think it was riding that put him and I closer."

How was having someone a bit younger around all the time, almost taking a dad role?

Shane: At first, it was kind of annoying to be sixteen or seventeen and having to look out for a kid. But honestly, all we did was ride anyway. (Laughter) Besides, he's always been really quiet, even as a kid.

Dillon: I was probably the annoying little brother. Growing up, the dudes we rode with would put me in my place, they kind of molded me into not being a little shit, and taught me park etiquette. I think it was riding that put him and I closer. When I was a kid I spent more time with my sister and he did his own stuff. Once I got a bike we started traveling.

When I was in high school, I would go to Richmond every weekend to ride with Shane. As soon as I got my license traveling picked up more. As soon I graduated I moved down to Richmond. We lived together in three different houses. Last year Shane and his lady got a house, and my girlfriend and I got a house. We live on each side of the city, a ten-minute drive. Richmond is a small city so we can meet up anywhere.

How is it not living in the same place anymore?

Shane: It’s weird; but we like space. I think towards the end we were getting on each other, because we were living in a small apartment. It’s still good. Everyone that lived in the building other than one family rode BMX. It was wild. It was a constant party. It was awesome, but not when it’s four in the morning and everyone is screaming partying, and you have to be at work in two hours. I’m gonna move down the street so I can be here when I want to and be part of this, but then leave when I want to go to sleep. (Laughter) Now we got a good set of trails in my neighborhood, and Powers Bike Shop, and I have a ramp in our yard; it’s a pretty good area.

Dillon: I agree with Shane on this one, It’s weird but its good at the same time. I still see him just as much as I did when we lived together. Plus I’m still always over his house!

Dillon with a hop, skip and a 540 off a concrete lily pad.

How do you think your riding would be different if you didn’t have a brother to ride with?

Dillon: I might have done martial arts more if Shane didn’t get me into riding. As long as I’ve been riding, we’ve been riding every day together, unless he goes out of town, or on vacation. We could go ride a curb for three hours, or go to a vert ramp and be scared as shit but try to ride it. It’s weird thinking about that.

Shane: We bounce tricks off each other, and we end up unintentionally riding like each other. If I didn’t have a brother, I’m not sure. I’d still be doing the same shit; I just like to grind.

Dillon, do you feel that your consistent use of metal pegs has been influenced by Shane?

Dillon: For the longest time, I would say Shane played a big influence on me running metal pegs because that’s what he ran. Then a few years back he started running plastic pegs here and there when he would come to some things. When they were on his bike I definitely messed with them and they were awesome. But metal pegs are what I have been riding since day one and what I prefer on my bike.

What’s the worst thing about having a brother?

Dillon: We have the same t-shirts since we both ride for the same companies. We don’t really have problems.

What’s the best thing about having a brother?

Dillon: Constantly having someone to ride with. Keeps us motivated.

Where do you see other, as far as riding together, etc. in five years?

Dillon: Still to that day.

Shane: I’m hoping for the same. I’ve been doing well for myself outside of BMX…

Dillon: I mock the lifestyle that he’s got. My job isn’t as good as his, but we live within our means.

Shane: I feel like I could fall into the old salty bike rider. But he’s still stoked, and it gets me stoked to learn new shit.

IN THE CUT - Profile In Houston

Quite the rollercoaster of an adventure... - More Info

The Leeper brothers are supported by our Official DIG Partners: Profile 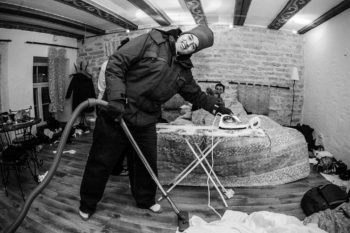 The Highs & Lows With Dave Osato 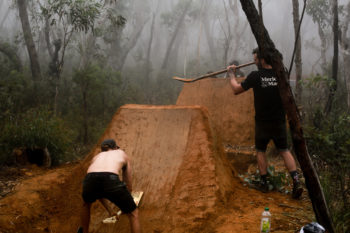 Cut Loose Down Under