Cut Loose Down Under

Get a bunch of your good mates and a couple of legends that you haven’t got to hang out with before, put them in a convoy of three cars and put them on a road trip to go make some memories and ride kids bikes… They will either end the trip becoming best mates or kill each other because of the amount of continuous shit talking that has gone down!! This degenerate group of misfits that made up the S&M Australia crew is Xave Koen, Bevan Cowan, Tom Boorman and Will Muthafuckin’ Gunn, as well as myself filming and the trip dad Scott Greentree shooting photos.

You can’t have a team trip without a team group photo. This was taken in the rain post handball session at Goulburn, NSW.

Goulburn Skatepark is must a stop on the road from Canberra to Sydney as it’s a super fun park but just as we arrived the rain did too. I don’t even know where the mini rubber soccer ball came from but a hectic game of handball ensued.

Will Kerr and his girlfriend Helen let us invade their house for a few nights and he has a dialed mini ramp setup in his shed. Bevan Cowan floats a Euro during one of the night sessions. Young, NSW.

We started the trip in Katoomba in the Blue Mountains where Xave lives. We spent the first couple of days there getting blind, digging at the trails and waiting for the rest of dudes to arrive. A few days later the rest of the crew arrived and we were all together and the trip had officially started. As we made our way to The Kerr residence the place of hell times, loose trails, the best shed in Aus and plenty of beer… We decided we would head to a swimming hole first. Xave had been talking up this jump rock spot all day saying how good it was and that there was some loose jumps. This got me and most of the dudes hell excited! (I love jumping off shit) So we rocked up to this spot. We walked for about 15 minutes and arrive at some shit little dam with an old naked bloke chilling. To our disappointment some how there was a miscommunication between all of us and Xave that led to us not actually going to the best Jump Rock in the Blue Mountains but in fact going to this dam where the biggest jump was half a bees dick high. Any way, all the dudes got on the goon and shot gunned a bunch of beers so that we had a reason to try make this fun… as you can see I’m still hell off Xave on his poor choice of swimming hole ha!

"We walked for about 15 minutes and arrive at some shit little dam with an old naked bloke chilling."

We then received a call from Jonny Mackellar and Tim Weekes who were already at Will Kerr’s Trails where a glorious arvo session was going down, which we missed cause we ended up going to a shit waterhole and caught a sunset session at Bathurst instead. Will Gunn as passenger and Xave in the bed in my van, Tom and Bevan in a rice bubble and Scott in his van we continued driving.  I have some seriously fucked led lights in my car, which for this trip I turned into a strobe light. Xave and Will got heaps drunk and my van turned into some weird 80’s disco. Only thing missing was the laser and smoke machine. I can only imagine what the boys in the cars behind us were seeing.

We tried to hit Will Kerr’s Valley View Trails for an arvo session one day but the rain shut us down hard. The sky provided a nice double rainbow but it wasn’t worth it. We did get a session the next morning though, Thanks again Will. Young, NSW.

Someone spotted this playground on the way to the trails in Canberra so we went back after the trails session to give it a going over. Bevan Cowan proceeded destroy the place. Barspin over the slide is only 1 example. Canberra, ACT.

Drunk as hell we rolled into Wills place and were greeted by all our mates!!! We continued to get blurned, and had a SLAYER session on the ramp. Some heavy shit went down!! Don’t really remember what or when but we definitely were stuck in the Young vortex for a while. We rode the trails at some stage and drunk a bit of beer every now and then and swam in the pool. Thanks Will and Helen.

Eventually we got to Canberra after stopping at a couple rad skate parks. We rolled into an already preempted heavy hitting session at Snails. Its always rad to get there and see Rusty, Chris, Raine, Rhysty, Tys and everyone else shredding the absolute piss out of it, but doing it ever so gracefully. After catching up with everyone and a rad session. We headed to the hostel and then I don’t actually know what happened. I know Xave, Will and I had a drinking session in the car park behind the hostel at some stage. It could have been that night, we said a lot of nice things to each other and talked a bunch of shit about our mate Kiwi mate Bevan (say Bevan in a New Zealand accent and it will change your life)

Harden is a rural town between Young and Canberra with a population of less then 2000 people but they recently got this rad park built for the locals. We only intended to stop for food but ended up skipping food in favor of a session. Bevan Cowan, Spine 180 T-Bog. Harden, NSW.

The 1 Foot X-up is a classic trail trick and one that I wish I could do personally. Will Gunn certainly can do them properly. I’m jealous. Canberra, ACT.

Next day we got up and went to Hillfire Trails, roached the absolute shit out of the jumps, didn’t water shit and complained that the jumps weren’t good enough... While watching Jonny, Tom and Will drop absolute hammers! Haha just joking! Not joking about the hammers being down but. Thanks heaps to Rhys and Tys, Backbone and The Hillfire crew for being all round legends and all ways hooking up the good times! We stopped into a loose kids playground with some banks and a slide. There must be a BMX rider working for council because I can’t see how it wasn’t designed to be rode and still struggling to see how a child would even use it.

After that we headed to Backbone BMX to catch up with everyone and get a loose session at Belco. Tys, Will and Harti were tearing the big bowl at Belco an absolute new one! Full on absolute sick, mad-dog, B-dog, also known now as B-dad rocked up full of stoke and as usual kindly jumped on one of my cameras and absolutely did a Dale Watson Job on helping to film some goodies with me.

Rhys Williams at Backbone BMX was a deadest legend for getting the crew some laps at Hillfire Trails one morning. Tom Boorman Turndown. Canberra, ACT.

Unfortunately the Belconnen session didn’t end as we would have like it to! Of course out of all of us Xavier, who at the time was having his first child in two weeks. After taking out a typical scooter kid who tried t-boning him and came off second best had to go and get locked up on a loose fakie and break his arm. I’m pretty sure he put a hole in the concrete with his elbow, so apologies in advance Canberra council. Definitely one of the toughest dudes going because of course in true normal BMX fashion, instead of going straight to the hospital we spent the better side of 45 minutes chilling in the car park out the front of Backbone, drinking beers and talking about how we should probably take the Big dude to the hospital! Long story short Xave got back to the hostel high on morphine to us all awaiting with a carton and a hug for moral support. Some funny shit went down that night!

Another one from a session at Will Kerrs shed. Xave Koen stretches a fast plant dangerously close to the roof.

"I have some seriously fucked led lights in my car, which for this trip I turned into a strobe light. Xave and Will got heaps drunk and my van turned into some weird 80’s disco."

We headed off  out of Canberra the next day after the usual BMX store vortex at Backbone. As everyone who love kids bikes knows how easy it is to get stuck in a BMX shop just talking shit! We rode Gunners, and eventually got to Goulburn to try get one last ride in, except it was pissing down with rain!! We ended up reliving our school glory days and involving our selves in a heavy hitting game of handball. Shit got out of hand… Friendships were lost, trust was broken, and I’m surprised a fist fight didn’t break out. This is pretty much is how we ended the trip and went our separate ways. Without getting too emotional, it's funny how you can get bunch of like-minded dudes, put them on a trip, and they come out of it becoming family. Thanks to S&M and Triplesix Distributions for organizing us delinquents to hang out, ride some stuff, catch up with everyone and most of all for the good times!

Someone put this bit of ply on the fence at Civic Skatepark, we don’t know who but I want to say thanks. Will Gunn Foot Plant. Canberra, ACT.

A day after this Playground Tabletop, Xave Koen had a little tip over while filming a clip and broke his arm. We all hope he's healing fast. The whole team sends congratulations on the birth of your baby Girl too. Canberra, ACT.

Loose As A Goose - More Info 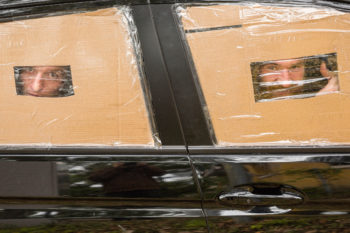 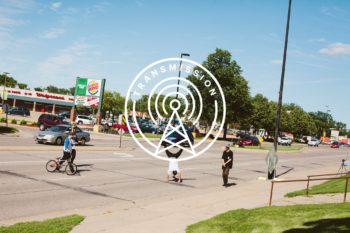