Tales from the Front Line with Eclat in Chile

Words and photos by Ryan Scott

As I blindly ran down the street, through hundreds of people in the crowd, past the riot police that just soaked myself and a thousand Chilean protesters in yet-to-be-identified liquid I was in a panic. My eyes, throat and sinuses felt like there was gasoline in them and my face burned to the point that I thought it was beginning to blister from the burns. My pants were dripping with the same liquid and I wondered if my skin was bubbling underneath them. When I finally made my way to a restroom and washed my eyes out enough to realize I’d just been heavily soaked with pepper spray and I was going to be okay the first thing I thought was “at least I’ll have a good story”.

They did it all and even survived a riot.... - More Info

That first full day with Stevie Churchill, Sean Burns, Alex Kennedy and Bruno Hoffmann in Santiago, Chile was anything but routine. Shortly after regaining my vision, I learned that Stevie wouldn’t be able to ride after nearly breaking his thumb on the very first clip he tried to film outside of our hotel door. I expected him to be bitter about the situation, but Stevie clearly has been in similar predicaments before and he took it in stride. We decided to shake ourselves off from the rough morning of pepper spray and injuries so we packed up and headed outside of Santiago for the day with the good folks from iBikes!, the distributor for Éclat in Chile. As the sun faded at the end of the session the locals warned us to get back to our hotel before the protests in Santiago became dangerous. We took our time, thinking they were exaggerating.

AK snuck in this switch crank arm grind moments before security closed the fence up in front of this rail.

Rich Forne and I tried to shoot through the doors of our hotel but were chased back inside by brick wielding members of the angry mob outside and I’m now thankful that we were.

The only section of the human brain that continues to grow regularly past adolescence is the part responsible for storing and retrieving memories. Whenever you’re exposed to something new the synapses there send impulses back and forth, growing and strengthening the connections between cells. Each remembered event and conversation about it does the same. What that means is that your brain, like it or not, has a glass-half-full attitude. No matter how good or bad an experience is, each time you’re out and about being exposed to new things your brain is slightly rewiring and improving itself. So, you see, Rich Forne being angrily chased back into the hotel by bat-wielding masked looters looking for kindling is actually a good thing.

Up close and personal with the Jay Miron army.

Later that night, as I watched the furniture from our hotel lobby burning in the street after rioters smashed the doors down to our hotel I realized what they’d meant. Thousands of people had flooded the streets shattering doors and windows, burning cars, looting and destroying dozens of businesses. What started as a peaceful protest over education costs that morning gave some an open door to express their anger over separate issues and others a green light to wreak havoc as they pleased. Police were lit on fire on their motorcycles. Acid was thrown onto people that burned huge, gouging holes through their flesh. Rich Forne and I tried to shoot through the doors of our hotel but were chased back inside by brick wielding members of the angry mob outside and I’m now thankful that we were.

When you think of a rider jumping a gap like this you don’t expect them to be too picky as long as they pull it. Sean has done some many crazy drops that he has becoming a perfectionist at his art. The first go at this double rail hop looked great, but he did it two more times for good measure.

Once the crowds were cleared by police, we walked up and down the street out front of our hotel stepping over piles of ash, glass and street signs as we went. Everyone with us seemed to be in disbelief over what we had all just experienced, yet the locals explained to us that it wasn’t uncommon in Santiago. Before all of the fires had even been put out, the business owners and people of the community started cleaning and putting things back together. It seemed so routine for them that it felt like watching a colony of ants immediately begin to rebuild a nest after a rainstorm washed away their home. In that moment, I felt embarrassed when I remembered that having to pay a baggage fee at the airport the day before seemed like a legitimate concern to me. Experiences like these are those that put things back into perspective.

Getting a clip on a spot where someone else has already laid claim can be sensitive sometimes, but Bruno chose to one-up the guy in the background with his own sequence. Pegs, hard 180, cab, nose 180 over the bench.

If I was a young child showing up to my local playground looking for a good slide session I would be very disappointed to find this jagged monstrosity. Fortunately, Bruno was able to make use of it with this Euro table as the kids ran off to play on the swings instead.

As far as BMX trips go, nothing seemed to come easy but the team is too good not to make it work. Rich got jumped and sucker punched one night out, leaving him to document things through two black eyes for the rest of the trip. AK somehow manages to maintain a zen-like calm after trying a line for hours because he just seems to know that it’ll work out. Sean wrecked his wrist jumping one of those insane “Sean Burns gaps” and didn't get to give it another go, but not before successfully sending himself off some setups that only he would think to try.

The guys from Éclat’s Chilean distro iBikes! were our guides for the trip, taking us around to spots and escorting us to the coastal towns. Andres brought this bike with him everywhere to cruise the streets with the team. Anyone remember the Mongoose Moosegoose?

Stevie Churchill got broke off early on but the unusually eager local fan base kept him busy...

“We should probably run away”

Getting onto this wall was no easy task, but Bruno was airing it like a transition by the time he got used to it.

If you’ve ridden BMX for any significant amount of time then you understand how you see things through a different set of eyes than the average person. Eventually handrails, stair sets and transitions become a means of exploring the world and connecting with people. It’s not the initial intention, but BMX comes to offer a lot of peripheral experiences aside from riding a bicycle.

Throughout the rough times there always still seemed to be a sentiment of thankfulness on the trip. The local BMX scene is thriving and enthusiastic. Kids waited outside for hours to see their favorite riders, and each time we passed the boarded up front door to our hotel it was a reminder of how much worse things could be. We took trips out to the beautiful coastal towns of Valparaiso and Vina del Mar that served as a welcome contrast to the grittier setting that Santiago provided.

Alex dodged traffic, curious construction works and pedestrians for three hours only to have someone walk in front of the camera as he pulled it. Not one to be defeated, he want back the next day to seal the deal and get the clip.

The remains of the furniture taken from our hotel lobby burned for almost an hour in the street while off in the distance a building and several other fires were set ablaze.

At times there seemed to be a black cloud following above the Éclat team through Chile, but in retrospect I don’t think anyone on the trip would undo it. The hard times craft a fine appreciation for the little luxuries of home. Ultimately, the Éclat team destroyed some amazing spots in a beautiful country and had some good times and a few dozen empanadas while they were at it.

In The Cut: Behind-The-Scenes with Éclat in Chile

Look out for that tear gas... - More Info 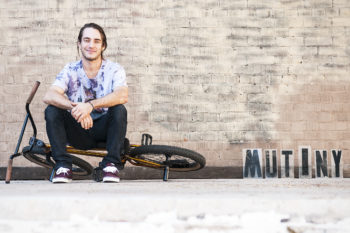 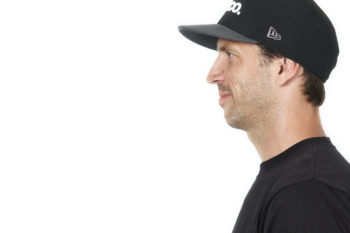 “I’M OUT OF THE COMPETITION ERA AND INTO THE BARBECUE ERA.”