Jared Eberwein Getting The Blood Flowing at Jurupa Skatepark

In Conjunction with our Official DIG Partners: profileracing.com

"This idea came to mind after many morning sessions by myself. I had a routine schedule I found myself in just before summer started. I would drop both the boys off at school Tuesday/Thursday and get to Jurupa about 9:10 in the morning. The park gate didn’t unlock until 11AM, and this was my window of free time to just ride with no interruptions. I wasn’t going to let a locked up skatepark deny me of that. I would just simply hope the fence as gracefully as you can be. At that point, I’d have the entire place to myself. I started just having my own “private sessions”.

I like to go fast, and it became a way of warming up for me, getting the blood flowing. The park being empty made it VERY easy to just rip around the entire park. I’ve ridden Jurupa my entire riding career, so I know this place inside and out; all the gaps, transitions, lines, and more. I started warming up one morning, doing manuals and then into gaps, carving, hopping over stuff. Then I started thinking of linking this line to that line, these gaps to those carves. Then boom, I was like, “I’m going to try and link damn near all the gaps and lines together and see how it goes.” I’m looking throughout the park, planning, thinking, and eyeing things up.

During this time, when I would stop to catch my breath and hydrate. I wrote my friend Zack Peacock, I’ve always just called and referred to him as “Peacock”. He’s a badass skater that I grew up with a Jurupa, apart of the locals/friends since the day it opened, we go way back. Still friends and have always seen and stayed in touch. I start explaining this idea and how much fun I was having just there and figuring it out. Peacock's response back was, “Down!” He is always up for making cool ideas come to life! We went back and forth a bit, and then set a date to start. The idea of the edit obviously stemmed from the cool edits Brandon Semenuk did, called Raw 100. I just wanted that same vibe, hauling ass throughout the park, raw bike noise, nobody around, just fast fun.

This meant we had to show up early and hop the fence, we set for a Saturday. Which on the weekends the park opens at 8AM, I’m not sure what I thought for the time it would take. I was just hoping we might get it done before 8AM or in hopes that no one would show up that early anyways. I would say we were off to a slow start, as we really had to do a lot of planning and understanding of how to capture what I had in mind for the entire line. All the multiple angles, multiple cameras, and audio, etc. Fast forward to 7:45AM, we’re maybe not even halfway through the project, and there are two people in the parking lot waiting for the gate to be unlocked at 8AM. They come in, start skating, I’m already a little discouraged but didn’t want to be a bummer. Not to be selfish, but the fact I knew I lost that “Raw park to myself” vibe. I started struggling with a part of the line, getting frustrated. Looked a Peacock, and I can tell we were on the same thinking and just called it a day. We discussed and realized this session was a good learning curve and understanding, and that we were gonna have to start over on another day. Good thing is, we basically got the line sorted out, had to change up some audio/camera things, and DEFINITELY had to start earlier and on a weekday. Which the park doesn’t open till 11AM on weekdays, meaning we would have the park to ourselves longer.

We picked another date and locked it in, the day before the next film try, Peacock told me that he had fallen skating the day prior. He said he would be good to skate and film, but hoping the fence might not be so easy. I ended up bringing a ladder to get us up and over, and it worked great! We laughed it off that we’re still hopping fences to ride/skate, but now older and wiser ha! By the way we arrived at 5:40AM and got going at 5:50AM. Here is a little bit of the process, we mic’ed up my bike and I went through the whole line. Which ended up being like almost a two minute line depending on just how fast I go through it. We do the mic’ed bike line, then we mic’ed myself and I go through the whole line again. Then we begin filming, and Peacock ends up using three different cameras, GoPro 9, Sony A7 something (I forgot), and a Mavic Drone. We wanted to show and highlight it as much as possible, multiple camera angles and perspectives help do just that. Yes it’s all one line, but to make it work and understanding in video, we have to break it up and film in sections. Also being that Peacock is on a skateboard and following me, AND he does a DAMN good job hauling and keeping up with me as I’m moving fast, almost faster than you can get a feel for in the video. Peacock used all his experiences and knowledge on how to portray that feel.

We started with the GoPro, the figuring of the line at this point was finding the line for Peacock to follow and capture, as my line was obviously planned and set. We go through the whole line sectioning it out, then we go back through the line again with the GoPro highlighting and focusing on the areas I did certain maneuvers or tricks. We wrapped it up on the GoPro, and then onto the Sony now. Sort of the same scenario, but I do run the whole line once with no tricks, and then another with tricks. Then run though and section the line out again with the Sony still, and yup next up the sectioned tricks. Wrapped that up and moved onto the drone, and here we go again. Whole line by itself, and then with trick, and then sectioned out. After the drone clips seemed to be completed, we may have had a couple things in mind to go back to capture or redo. Whether it was audio, or one of the three cameras.

At this point it was about nine something, close to ten I think. Definitely a solid four and a half hours of riding. Side note, whatever I started the filming in, meaning my clothes, I had to finish in. I started in the morning at 5:40AM which was a little cold, I had on a FA windbreaker and 100% gloves, which I don’t ever really wear gloves. By the end of the filming I was DRENCHED! Another thing I didn’t realize is how loud surrounding noises can be. I was so glad Peacock had me do the audio run-throughs first, that way the rest of our filming we didn’t have to worry about noise in the clips. Man did it get noisy, garbage trucks, school buses, semis whipping by, people jogging by, airplanes, it was never ending. I was so stoked that we captured so much and we were one step closer to bringing this idea to life. What I explained here is a lot but it doesn’t end for Peacock, now he had the reality of going through ALL the footage/audio and building the edit. Which I’m forever always grateful for!

The RAW 100 videos from Brandon are pure brilliance, and on a very high level of perfection and quality. I’m not trying to compare or compete with them, just that he’s inspired really cool riding and ideas. I’m grateful to have a friend like Peacock, who genuinely loves to create cool projects, loves everything cameras, a badass skater, and mainly a lifelong friend of mine. Very stoked on this project in an understatement, thank you Peacock, SO MUCH!" -Jared Eberwein 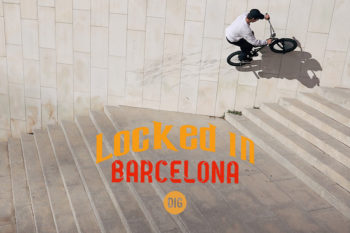 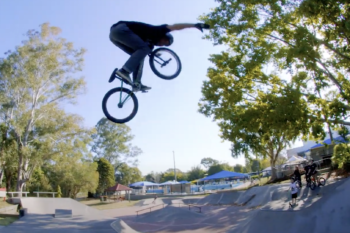 How To Tuck No Hander With Alex Hiam

LEARN FROM ONE OF THE BEST