Mat, Long Beach circa '90 on a Haro Sport. Photo by Spike Jonze

Before we even begin to start exploring Hoffman Bikes, I think it’s important to re-examine where Mat Hoffman was pre-Hoffman Bikes days.

It’s early 1988, and Dennis McCoy and Joe Johnson are in process of quitting Haro to ride for a then-unheard of amount of money from the likes of Pepsi Cola and Huffy Bicycles. This move from two major players on the Haro team leaves room in the budget to bring on a new rider. Former Skyway team manager Ron Haro, brother of Ron Haro, secured Mat Hoffman a spot on the amateur team. The original Haro deal is for approximately a year. In that time, Mat Hoffman wins everything in sight, turns pro and has his eyes on tricks that have never been done.

In early 1989, Mat Hoffman quits Haro, and lands the first 900. But almost since Mat started riding, he’d been given bikes from sponsors. He never really seemed to have the chance to ride what he wanted, when he wanted. (Not that this is a bad thing, it just goes with the territory.) According to Mat, “When Bob [Haro] left in 87, I was there 88 and 89. Now it’s Jim Ford’s company and Jim has to make money and these people don’t know where they’re going with Haro, they don’t know how to reinvent. Haro weren’t about reinventing, they were just about growth, and I was about reinventing. I was the reason why Haro had a bashguard and had pegs coming out of the forks; they were my designs. I was trying to do new things for Haro, but I would design something and by the time it got to the table and back to me, it was not what I was saying.”

But Mat Hoffman’s technical needs went even deeper: “I was getting knocked out daily, often because of bad parts.” This presents a problem, a very major one. And Mat Hoffman was never going to be content riding equipment he didn’t fully trust. So he quit, and bought his own bike. Enter the 1986 SE PK Ripper. “I was on my way back to California with my girlfriend, and we stopped in Yuma, Arizona to visit her cousins. It was sitting in the town's local bike shop. I just had to have it. It was the first time I got a bike where I could glob it with stickers and do whatever I wanted. The only bad thing was paying the bill,” says Hoffman.

Mat rode the PK Ripper, complete with old Haro forks and one-piece cranks, for what seemed like an entire year, before going back to Haro for a brief time. But that year was highly influential on Mat’s riding and Mat’s bike setup. The PK Ripper had s-bend chainstays, an integrated seat clamp and mellow geometry, all of which would become a part of the first few runs of Condor frames. Even more interesting was that Mat’s first production runs were built by SE, the same brand responsible for Mat’s year of freedom. It was all slowly coming together.

I remember seeing a “Haro” tour in 1990, with Hoffman, Steve Swope and Rick Thorne. They were riding Haros, but it felt more like their own production than a Haro-branded tour. It was in Mat’s rig, with his halfpipe, and from what I remember, I left that demo psyched on Mat Hoffman’s riding, not Haro. Even then, as an ignorant 16-year-old, I could tell that Haro was not Mat Hoffman’s home.

The bike that really started the birth of Big Air and the infamous weedeater in the background. Mat Hoffman at home - Fall 2008 | Photo by Andrew White 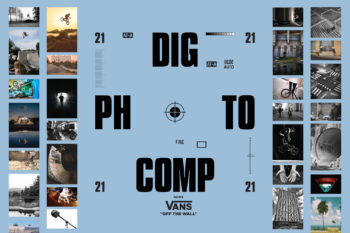 Over $1000 of prize packages up for grabs 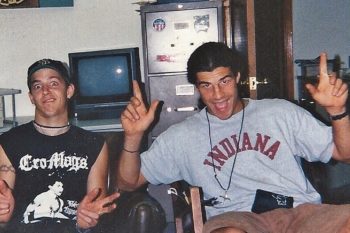