Some people just make shit look good, whether it's the way they dress, how they ride, or how they design BMX frame stickers on behalf of one the most talented riders on the planet. Antidote founder James Cox has a long connection with both United and Nathan Williams, and Mr Williams just so happened to become one of James' guinea pigs when it came to testing out his recently discovered passion for tattooing, usually late at night in Two Snakes Tattoo shop after a few tipples round the corner. After seeing what James could do with his tattoo gun Nathan asked him to come up with some flash inspired stickers for his updated signature frame from United, The Mothership. We found out more about how it came about, his design inspiration, and some thoughts on the current state of BMX.

How did the collaboration with Nathan come about for the United X 2 Snakes frame?

The colab came about mainly due to the fact that prior to starting up Two Snakes Tattoo, I was filming full-time for United. Nathan and I became close friends over this period and he inevitably began getting tattooed at the tattoo shop by Alexis (Camburn) and myself whenever he came to Hastings. When the time came round to start thinking about a new colourway for his signature United Mothership frame, he suggested that he teamed up with Two Snakes Tattoo and we could help them supply the frames with a sticker sheet that resembled a page of tattoo flash, so that people could choose the design and location of the stickers like they would with a tattoo. We all thought it was a great idea so things just went from there.

How long have you and Nathan known each other. Do you get to hang out often?

The first time I met Nathan was when we went filming for a Props Euro Megatour in about 2007-2008. Crazy to think about that he was completely unknown at that time, just a very quiet clean-cut kid from Nashville. I actually think that may have been his first ever trip for United. How things have changed since then...obviously over the following years we went away together a lot, and for the last few years we've been taking little vacations between Nashville and wherever I'm living at the time so we get to hang out whenever we can afford it without having to film or do any compulsory riding activities. It's annoying that we don't get to hang out like that more often, but he's not exactly on my doorstep so we do what we can.

How did the design process work for the collab stickers?

The design process was fairly straightforward. Nathan likes the old classic American traditional tattoo designs, and the nature of these drawings lends itself to stickers pretty well as they're very bold, simple and vibrant. With this in mind we used this style as a basis for most of the stickers, and then we included a few esoteric occult symbols as a little nod to what I'm personally more into, and a subject that Nathan and I have spent a good few hours talking about over the years. Alexis Camburn painted it all by hand, we showed it to Nathan to get his thoughts, then when it was all given the thumbs up I just got it all on the computer and laid it all out on a sheet for people to choose their favourites from when they buy the frame.

When did you first get into tattooing.

I've been tattooing on and off for a few years now. As anyone who's tried to pick it up will know, it's a very challenging thing to master and unfortunately my closest friends bear the scars of my first efforts, which is something I still really appreciate every time I get to tattoo someone. I'm a little more consistent now than I used to be but I'm still very much an apprentice, and I've learned to pick my battles now when it comes to tattooing! I've been offered a lot of support and help by some amazing mentors - Alexis Camburn, Thomas Hooper, John Dye and Simon Erl to name a few, but all the help in the world doesn't replace the simple act of putting the hours in. I love tattooing and drawing, but unfortunately real life tends to get in the way of my progress fairly often. It's like doing tricks on your bike. If you don't do it a while you lose your confidence or that muscle memory and you get sketchy. That's pretty much how it goes for me, I'll do a bunch and start getting somewhere, then have to stop for a month then I'm back at square one again, sketchy as fuck! I think I'm just destined to be a jack of all trades but a master of none.

"In my opinion tattoos should be fundamentally unappealing to the mainstream, which to me makes them the opposite of design." - James Cox

Does it influence how you see design?

I don't think that for me there is much correlation between the design work I tend to do and tattooing at all. Maybe as far as the composition of a drawing there's a crossover, or using an old tattoo influenced image every now and again, but to me tattooing is a form of anti-design. I like horrible looking tattoos, tattoos that are wedged between other ones and that contain subjects that make pretty girls in nightclubs think you're a piece of shit. In my opinion they should be fundamentally unappealing to the mainstream, which to me makes them the opposite of design. I like (commercial) design and graphics to be perfectly balanced, clear to understand, have a personal touch and to generally be pleasing on the eye. I guess what I'm saying is that I prefer beautiful design and ugly tattoos.

What would be the biggest influence on your design work generally?

I'm not sure what the biggest influence on my design work is. I suppose it depends on what I'm doing. I like to keep things fairly simple. Through my music tastes I've been influenced by things like old tour posters or record sleeve artwork. I watch a lot of old movie title sequences, there's some great uses of typography and design in those. I also read a lot of books on the occult, secret societies and all manner of strange subjects so where possible I always like to throw as much of that in there as I can. Over the years I suppose you're influenced by all sorts of stuff, some of which you don't even know you're being influenced by. It's just a case of keeping your eyes open and trying to take it all in.

"I guess what I'm saying is that I prefer beautiful design and ugly tattoos. " - James Cox

Two Snakes seem to have a lot of BMX connections. Tell us about that.

Two Snakes does have a lot of tattoo connections for sure. Ex United pro Caleb Kilby is a resident artist there and Alexis has known all of the riders in Hastings since they were just kids. Now she tattoos almost every rider that comes to town. Ben Lewis, Corey Martinez, Bruno Hoffmann, John Dye, Dan Lacey, Mike Hoder, Tyrone Williams, Jimmy Rushmore, Alex Valentino, Nathan Williams of course...the list goes on and on and on. Aside from that, Thomas Hooper tattoos from there whenever he's in the area, the shop was pretty much built by BMX riders, you've got the new Source Park a stone's throw away, and they've even got Dan Price in Trinity Whole Foods next door!

What’s your take on BMX these days?

My take on BMX nowadays is essentially irrelevant because I'm 33 years old and I'm probably not even good enough to hold enough credentials for an opinion anymore. I've definitely narrowed down the amount of things I'll take the time to look at now, most of which is all here in the UK. The more popular side of BMX and street riding seems more an more alien to me as every year goes by. I can appreciate a lot of the things people do as it's technically very difficult, and I still love filming and producing work in that world, but on a personal level I still prefer a far more purist way of riding and more of a grass-roots approach to the culture behind it all. I liked the years when BMX was a more subversive pass-time than it is now. AM:PM, Flukelife, Doorstep, PDSI, Slack, Clarky's videos, Marv's videos, Newrick's videos, I love all that kind of stuff. I'm going to sound like an old man here but I can't be doing with commercial rap music, green claw logos, degrading internet comments...fuck it I'm not even going to get started. The current stylings of BMX outside of my small circle predominantly aren't for me, but I'm totally fine with that. To be honest it's probably not even modern BMX that pisses me off, just modern society.

"To be honest it's probably not even modern BMX that pisses me off, just modern society." - James Cox

What’s next for you and Antidote?

I've been filming a DVD for Antidote for a really long time now. The team is pretty spread out - even more so now I have that Nathan Williams character on board, and most of the guys have other filming commitments and full-time jobs so it's taking longer to put together than previous video projects I've worked on. The team right now is Marv, Tom Sanders, Tommy C, Shayn Steels, James Newrick, Jeff Z and Nathan, and I'm hoping that pretty much everyone will have a decent section each. I really enjoy doing Antidote as it's an opportunity for me to do literally anything I want with regards to design, motion graphics, branding, music and video. I've recently had some jackets made which went really well, and I've also received some new snapback caps that I'm pretty happy with. I get everything made in really small numbers. I like the idea that once something's gone it's gone. It makes everything feel a bit more unique. My future plans are pretty much to finish the video, bring out some cool new stuff for Summer, hang out with the crew some more and just see where it goes. There's no big plan as such. It keeps me out of trouble, and gives me an excuse to get out there and make things for no other reason other than I enjoy it. 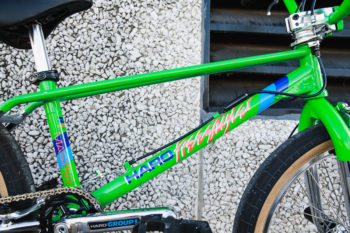 The Nuts and Bolts of DMC's Personal Ride 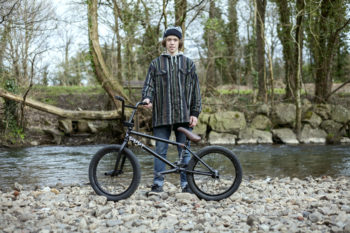 Fresh recruit to Cult in the UK