"All The Way Turned Up" - Mark Burnett and the Subrosa Griffin

Mark Burnett is easily one of the fastest growing young Pro's riding today. Over the years he has been consistently melting minds with his many DVD sections, web videos and even on instagram, where he seems to always push the envelope on what is possible for himself and for BMX. All of that has now led to his own signature frame from Subrosa Brand, named the GRIFFIN!

Back in February, Mark and Lahsaan Kobza took to the streets of Barcelona after a 'full send' week at Simple Session, so you know the energy was high and Mark was definitely on a roll. In just two weeks time, this two man dream team worked hard to give you this prime example of what Mark is capable of and it's easy to see these guys work great together.

I was lucky enough to spend a few sessions with Mark and Lahsaan while they wrapped up this video, in-between all the madness that is Barcelona and the many unmentionable hang-ups we were able to bring you this interview and bike check with Mark... showcasing his new signature frame and getting a sense of Marks' personality is just the start. Make sure to watch from start to finish too, this is almost 6 minutes of amazing bike riding. You won't be disappointed!

Oh what a feeling it must be to see your name on a frame!?

Frame decals and artwork all by Jason Richards of Sparky's USA.

Marks signature GRIFFIN in all it's slick glory. Black. 21" TT.

Well this was crazy to witness! This spot isn't hard to find in Barcelona, so to be able to think up some original moves isn't the easiest... But leave it up to Mark to pull this fakie-pole to fakie-smith-cab back into the bank!

It was 10 years on my birthday.

Who are a few of your life inspirations?

Shia Labeouf, Tom from Good Will Hunting, whoever the chick is that sings in Purity Ring, George Washington Carver, Trev.

Recently, since you’ve switched over to Subrosa, I’ve noticed your riding grow into a more concrete and calculated style approach to what you put out for everyone to see… Could you tell us how things have been since you made the change to the Subrosa family?

I appreciate that. Yeah it was, and continues to be, a whole wild chapter turn in my life. I quit my previous sponsor and started riding for Subrosa essentially on my 20th birthday. I was no longer a teen and no longer riding for my childhood sponsor. It really cemented the role of adulthood into my brain. I felt as though I could finally be taken seriously and as such my energy started gravitating towards really being who I wanted to be. Some people would say it makes me crazy but I just like to think that I know what I want.

How does it feel to be supported by a brand like Subrosa?

Officially how long have you been repping them?

Technically it was announced on March 23rd of last year. That would be 1 year and 87 days.

What setup are you currently riding?

All black whip cuz I mixed every color. Chrome bars like a pinch of salt. Kinda like me :-)

Why call her the, ‘Griffin’?

Because my mom has given me everything I could have ever hoped and dreamed of and I’m in debt to her, indefinitely. It’s her maiden name.

Is there any specific frame geometry or design that is special to your signature frame?

Yeah, the art is sick as shit and its the geometry that I have decided I like best.

What colors does the frame come in and what are the varieties of top tube and chain stay sizes?

Strong and sleek. Black and squeak.

What was the duration of time filming for this project?

What made you want to film this entire video part in BCN?

Because that’s where I was at the time and that’s when I was with LK and a camera. And well its BCN. Like a canvas and every color in the world to draw on it with.

Why do you choose the VX approach adverses an HD camera setup?

Ole faithful. We Forgot to bring tapes though. Hahaha. Lahsaan and I spent 4 hours one morning scouring the neighborhood near MACBA trying to find some extra mini DV’s. The whole video was filmed on 3 tapes. Luckily we didn’t have any glitches filming over old stuff. Whoops.

Do you at all feel more satisfied with the end result of your video since you were able to oversee all the filming, editing and release, than you would would it’s somewhat out of your hands?

Yeah it helps and also makes me miserable because I’m my own worst enemy. I am proud of it, though, and I like my work for the most part. Although at this point I have seen it too many times and I don’t care to watch it again.

When Mark was explaining this spot to me, I couldn't really imagine what he was saying... But the proof is in the pudding here with this wild, innovative, semi impossible maneuver!?

"I FELT AS THOUGH I COULD FINALLY BE TAKEN SERIOUSLY AND AS SUCH MY ENERGY STARTED GRAVITATING TOWARDS REALLY BEING WHO I WANTED TO BE... SOME PEOPLE WOULD SAY IT MAKES ME CRAZY BUT I JUST LIKE TO THINK THAT I KNOW WHAT I WANT."- Mark Burnett

1 Euro will get you just about anything to quench your thirst inside the SuperMercat!

The bigger they get, the goofier they become... All smiles here for another day getting some shit done!

What is the most valued attribute to your life, strictly because of BMX?

Give us 5 words that best describe your time spent in Barcelona during the making of this video?

Do you believe that you can do your best when you have the advantage to choose your filmer?

Yeah if I don’t trust the person behind the lens then I can't concentrate.

The interlude portion of your video was my last day to ride in BCN and we all went out to continue on with the momentum you’ve mustered up for what you had in mind… It didn’t end up as we would’ve hoped but can you describe that day, what you went through and how you reflected on your riding after that day?

I mean to be quite fair I was wearing an entirely navy blue kit so we were behind the 8 ball to begin with. I got 4 things relatively painlessly that I was super stoked on. At the time I was having a really hard time riding because my head wasn’t in the right spot. I kept falling and my confidence was really shook up. That day was the first day since the first day of the trip that I felt like myself on my bike. In retrospect, I look back fondly on that day. We tried, conquered, and ultimately met my maker in just a handful of strides. That’s essentially the best thing for someone in my position. Feeling accomplished and also like you still have work to do. Days like that are the most motivating. I could always do without body slamming in the street, however.

Is there anyone who you’d like to especially thank for this making this video possible?

Simone for letting us crash, essentially the entire time and Sosia for housing our luggage too. Marta for helping me pick all my shit up on the Vespa the day before I flew out of town. Ryan and Ronnie for making it all happen. Lahsaan for being my best friend. You too Wesley. Good cafe con leches. All the rest. Much love hope y’all like it.

Mark is supported by Official DIG partners : The Shadow Conspiracy and SUBROSA BRAND 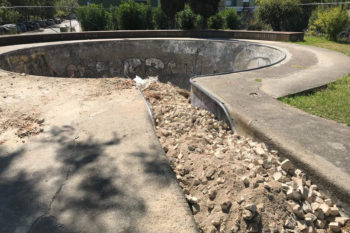 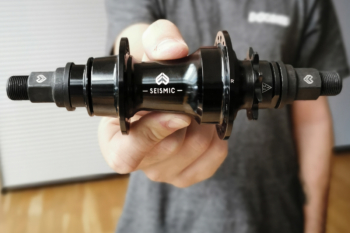 "We never rush the development of a new product"