"they didn't want to watch me ride 'cause I was so sketchy. It kind of bummed me out."

I built little jumps in my backyard when I was really little... But my first time ever actually seeing dirt jumps that somebody else built was a week after my 12th birthday when my mom and sister took me to Sheep Hills. I'll never forget rolling in there, there was probably 50 dudes there. Everybody was shredding. Shaun Butler was on a purple bike and was the smoothest dude I've seen in my entire life. It was at that point then that I was absolutely hooked.

I think Robbie Miranda was actually the very first guy who called me Hucker... When I was 14/15, even when I was younger than that, I was the sketchiest kid at the trails. I would just eat so much shit and get up laughing. I'd try to do tricks over jumps that I could barely jump. Tricks that I couldn't even do, I'd try and just eat so much shit. Everybody started calling me Hucker. I'll never forget, for a year of my life I'd go to the trails and a lot of the dudes would tell me to go home because they didn't want to watch me ride 'cause I was so sketchy. It kind of bummed me out. I'll never forget a couple different times dudes actually left when I wouldn't go home, they wouldn't watch me ride 'cause I would just die. They were terrified of my riding, it was just so squirrelly. No bike control, going as fast as I can. I used to hate my nickname especially in High School with all of the haters. There were people who actually thought my real name was Hucker. Ever since then I just stopped worrying about it.

There's nothing like hauling ass at a jump and being in the air and floating... There's ways to do it riding skateparks and street, but there's nothing that flows that good. Building something and being able to ride it just makes it that much better. I'd rather ride trails than just about anything else I can think of.

Most trail riders are scared to go do a gap, most street riders are scared to go ride trails... I definitely think there's a lot of respect for dudes who build and maintain trails. It's a lot of work. They're digging the same or more than they're riding. And a street rider or park rider goes to a spot and they can shred. It's just a whole different world riding trails, you know?

It would be totally different if I grew up on the East Coast... I grew up in California where there's not really trees and it's windy and everything is out in the open. The dirt's not good, and we don't even really have seasons. It doesn't snow half the year. I would definitely have a whole different approach. If I grew up on the East Coast I'd be living in the woods somewhere with trails. Realistically that's what I want to do out here. If I had the schedule I'd love nothing more than to do that.

Dipped 3 progression, 2013. Originally published in DIG Issue 97 as part of the DIG 25 feature (Hucker was 23 on our list for the year). Photo by Wes McGrath

I did this thing with Red Bull, it was called Urban Rhythm... Basically Red Bull hit me up with this idea to create something out of nothing. Bring in art, music and BMX all together, just because Houston doesn't get any BMX love being so close to Austin. The whole idea behind it was to make something out of nothing, and for me it brought me back to my roots: making jumps with wood pallets, making the sketchiest setups and having the most fun ever on it in a parking lot. Everybody that came out was super psyched, a lot of dudes came out for the art and they were just as stoked for the BMX, and vice versa.

Out of every place I've ever ridden in my entire life... I still think to this day Sheep Hills is probably one of the hardest places to ride, because it's all about pumping on flat ground that's not smooth and perfect. You don't have hills and gravity to give you the momentum, it's all based on your pumping and your pedal.

That's the most asked question when I'm traveling on an airplane. What do you do?... I say I ride bikes and they're like, motorcycles? No, BMX bikes. Most of them say alright and turn their shoulders. But it's pretty awesome. Some of them are actually blown away that riding bikes has brought me all around the world. It's a dream come true, I never thought in a million years I'd be a pro biker. Let alone travel the whole world. I'm so thankful for everything I have, I feel so blessed man. It's amazing.

I live with my parents. I moved out about three years ago to San Diego for the first time ever.... I bought my first car when I was 22 and moved in with Dennis Enarson. It was awesome; it was different. I lived there for about eight months then I broke my neck in Australia. Then I ended up moving back home. I honestly love living at home, I've got awesome parents, and I'm home so little I don't want to waste money on a house when I'm not there. I'd rather save up and be smart.

The dipped three one footer came about on accident actually... I remember I was in school, probably 15 or 16, and I remember Mike Aitken and (Corey) Bohan did them at the time and I was blown away. It was the sickest thing ever and thought I got to learn it. Whenever I was first learning it for the longest time I would get so scared, my foot would just come off for some reason and I'd land one footed. Then one day I just put it back on and it started working. It's crazy in that it almost works as a parachute. I remember Robbie Miranda back in the day, he'd three a big jump and if he spun too fast off the lip he'd take his foot off and it would slow the rotation down. When you spot your landing you put it back on the pedals. Once you pull it it's the most fun thing in the world.

Hucker with a move that Dave Carnie would refer to as "motorcycle sky dancing". Getting wild at the 2014 Kill the Line event in France. Photo by Hadrien Picard 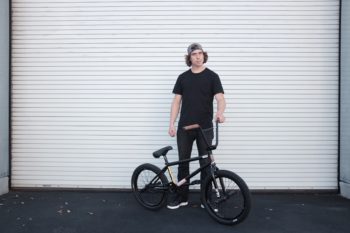 Get a lil' buck 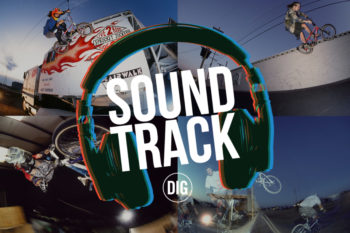 15 of the Condors all time faves