Doing it For Traffic Distribution

Traffic BMX's Robin Bourhis just whipped together a new Wethepeople X eclat setup, based around the awesome Paradox frame and i'm sure you'll agree it looks mighty fine. He hit the tools in Le Comptoir bike shop and then proceeded to take it out for a test ride - scroll down for the bike check, video and even a glimpse at the new Wethepeople and eclat clothing.

Where do you live?

I live in Paris, France. Such a great place for riding, there’s so many spots in the city center but you probably haven’t seen the suburbs! Also, my parents live further down in Fontainebleau, it’s like one hour away from Paris and it feels good to go to the countryside sometimes, it’s refreshing! (I think it’s one of the largest forests in France)

How’s the BMX scene there?

The scene is amazing in Paris, there’s plenty of people to hang out/ ride with. One of the best things about the scene is that everyone gets along with one another and riding with the lads is always a treat. Other than that, there’s a really good vibe and always a bunch of people that are willing to ride no matter what! We’ve got some good riders too: Ryoma Quenot, PJ martini, Micka Carmona, Yohan Bieuron and last but not least Asswad Djailani (AKA Lilsad) he’s a young blood but it’s impressing the rate he’s progressing at!

How have the Covid restrictions affected your riding this year? Do you have any plans for the rest of 2021?

It surely affected my riding in some ways because of the lockdowns and curfews we’ve been having for a while now… But I know the situation is quite similar in any other countries so we’ve just gotta make do with it. However, it didn’t stop me from riding and filming videos. Speaking of which, I have been working on a night video project with a very good friend of mine, Ryoma Quenot. This is going to be one of the most sophisticated video projects we’ve ever made and I can assure you that it’s going to be good!! We’ve been stacking clips for a over 6 months now and the whole thing is finally taking shape, we still need to go on a few night missions to get the last few footage and it’s going to be a wrap! Really looking forward to putting it out!

I’d say the new Paradox frame, I just love how that new abyss blue color turned out! It’s also a bit of a change for me because I had been riding a 21” frame for the past 3/4 years and I just made the move to a 20.75” frame. It didn’t take me long to get used to a twitchier bike and it just feels amazing.

Which parts last you the longest?

I honestly don’t snap anything on my bike, everything holds up pretty well and I don’t have to worry about the quality of products when it comes to filming a video part. But if I had to pick one, I would say my old guard sprocket and cranks. I had been running the Eclat SPIRE cranks and a saltPLUS guard sprocket for over 5 years and they are still up and running. Eclat & WTP never disappoint with the parts!

Which parts do you wear out the quickest?

Tires, pedals and grips like everyone I assume. When you ride on a regular basis, these tend to wear out a bit quicker than the other parts.

Do you do any modifications to your bike?

No at all, I don’t even cut my bars down. 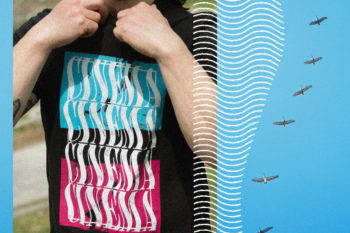 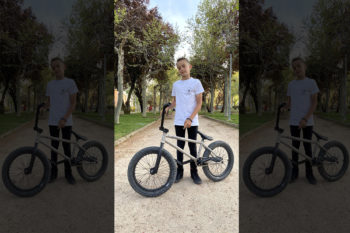 Welcome to the Fly Bikes Family!