The electrified ride of Mr. Jones...

Words and Photos by Rob Dolecki

It's been about a year since we did a video-version Setups with Trey Jones, and his whip has changed quite a bit since then. Gone is the clean chrome color scheme and Bully-inspired stickers; now it's all about a legendary guitar inspired frame decor, many well-used parts, and a splash of gold spray paint throughout.

How did your frame paint scheme come about?

The paint is based off of Dimebag Darryl’s guitar; black on top and blue on the bottom, with lightning bolts. The head tube sticker is the same logo as the head stock on his guitar. He also had a KISS sticker right above his pickups, so that’s why there’s the KISS sticker, but with Jesco in KISS makeup; it should be available now.

I guess the gear ratio, no one else really has it.

Probably my sprocket or chain.

My left grip.  I wear out left side way faster than the right side

Do you do any modifications to your bike?

Post-Florideah Swamp Fest, Vic Murphy tribute over some of the funnest jumps in Florida.

How was your winter?

It was awesome. I spent the whole winter getting ready for the jam. I can’t complain; I was out at Jeff’s riding trails and building cool shit with all my friends.

How was the Florideah Swamp Fest?

It was perfect, man. The energy was just through the roof; so positive. No one got majorly hurt. The cops showed up for a little bit but problem was solved. (ed. note: keep an eye out for a full interview with Trey about the jam, coming soon)

Going to Woodward East for Shadow Week, and hopefully going to the Scotty jam on July 23rd in Connecticut.

In The Cut - Florideah Swamp Fest

The Ghetto Street Comp of this decade, Florida-style... - More Info 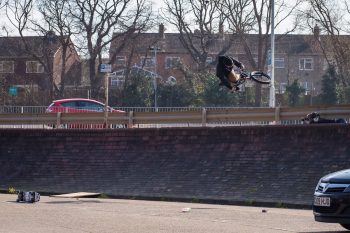 The beginning of the end for a legendary UK Spot 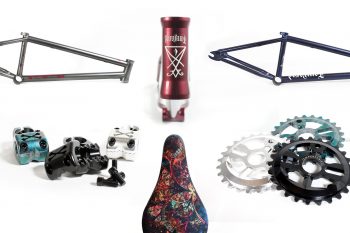 Quality Stuff On The Up From Down Under