The beginning of the end for a legendary UK Spot

Last week the Basildon BMX Boys (I use the term “boys” but our ages range from the mid-30s to 46) heard some bad news, our believed bowl / carpark in Basildon, Essex has just been sold at an auction. It was expected to sell for £450,000 but it sold for a staggering £725,000! (That's about 1 million dollars). Sadly 400 apartments are now planned to be built on this iconic UK BMX spot.

Local Lee Murphy, back in the day.

Lee Murphy, still at it today.

The one and only Garret Byrnes as seen in his DIG interview back in 2001. Photos by Ed Docherty.

It seems crazy to think that I have been visiting this place since the mid to late 80s, back then it had “WE WANT A SKATE PARK” painted in huge yellow writing on it. But the truth of it was that it was probably better than most ramps/quarter pipes at the time, offering a nice range of transitions from small to deeper with only the curb to hop as an irritation. Around 2003 us locals “borrowed” some cement from the council and made a little filler/curb ramp which lasted approximately five years I believe.

I can only assume that when it was designed and built in 1975 the architect must have a been a skateboarder. Otherwise what other reason could there have been for creating those perfect transitions that went on tyo be pictured in DIG and various BMX company adverts, playing host to the likes of Craig Campbell, Garrett Byrnes, Stephen Hamilton, the Shitluck team, Bicycle Union and many many more. The list is endless.

It seems crazy to think that I have been visiting this place since the mid to late 80s, back then it had “WE WANT A SKATE PARK” painted in huge yellow writing on it.

Whenever one of us got a new frame or part we always tried it out first at the bowl. Nine out of ten times there would be another crew of riders already there and we would get to know another bunch of friends because of this red brick wave that itself has been almost a friend for so many years.

I won’t end this by saying RIP Basildon Bowl, because it has not quite gone YET... but instead I would like to think that its' dying wish is for anyone that hasn’t rode it to try and stop by for one last session. Chances are you are probably never going to find a UK car park like this one ever again. - CU 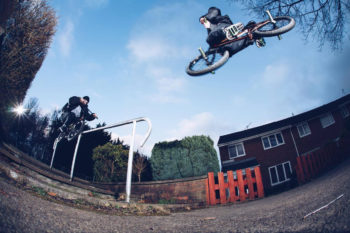 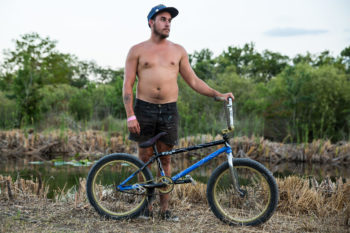 The electrified ride of Mr. Jones...