The Second Coming of the Nude Bowl

"so if you ever wanted a piece of BMX history, it’s there for the taking…Or is it?"

Words and photos by Jeremy Pavia

It isn’t always just about the riding.

This was my first time meeting Dylan Burton who ended up as our tour guide on the way in. He’s funny as hell and definitely knows what’s good when it comes to having a sesh in the desert.

I had the opportunity to be reminded of those moments on a trip to the legendary Nude Bowl in Southern California. I’m not just throwing around the term “legendary” for the sake of sounding more dramatic; it truly has an incredibly unique history that makes it what it is. From the early roots as a way for guests to cool off at the nudist colony that previously stood there in the 1950’s to the 1970’s, to being ridden by some of the most iconic BMX riders in the 80’s and 90’s including Ron Wilkerson, Mat Hoffman and Brian Blyther. It had a good run until the late 90’s, and the fact that it is in the middle of nowhere in the desert with no actual roads had a lot to do with that. It isn’t easy to get to and it’s the weird and unexpected location that helps give it such a unique feel. At some point wild parties were raging on the regular and things ended up getting out of control after a fight broke out. Four people were stabbed, leaving one person near death. It wasn’t long after when local law enforcement shut it down and filled it in with dirt hoping to close that chapter.

Dean has photos, notes, and knowledge of so many different pools and has a constant need to feed the obsession. The dude is dedicated and that is something we can all appreciate.

I’m pretty sure that Dirt Ron didn’t change his expression until we left.

Dean and Dirt Ron caught some footage along the way for a new Bone Deth project that is in the works. Dean rockin’ the VX and doing things his own way.

Fast-forward to now around fifteen years after lying dormant and untouched, the bowl has been completely dug out, fixed up, and lives on once again. The reason that this bowl has been on so many riders list of dream spots is because for so long it was dead and gone. Only the memories and stories kept it alive. The history contained within that empty swimming pool in the middle of nowhere is insurmountable. The stories from the 1950’s to now could fill book after book, and those are just the memories that people can actually recall, let alone the ones they were too wasted to remember during those wild party years in the 80’s and 90’s.

One of Dirt Ron’s buddies Maty Ray showed up in the early afternoon and shredded the hell out of the bowl while boosting t-bogs and switch handers out of the deep end.

"Even after staring right at it in broad daylight, it still didn’t sink in that we were about to ride a pool that had previously sat buried for fifteen years."

Dylan just so happens to take things too literally at times.

If you get sick of riding, just look around and enjoy the natural beauty that surrounds the pool.

When in Rome right? Dylan said fuck it and went for it.

I had been out shooting in the Oceanside, California area with Dean Dickinson and Dirt Ron when they mentioned a possible mission to the Nude Bowl in the following days before Dean was going to hop on a plane back home to Oregon. I immediately was willing to do whatever it took to make that happen. After the plans were figured out we met up in the desert on a side road and waited for Dirt Ron’s friend Dylan to show up and lead us the rest of the way to the pool which is miles from the nearest anything. We mobbed up into the hills taking turn after turn into the darkness. We rounded the final corner and once everyone parked the silence was the first thing that I noticed. It’s no wonder why this place was a crazy party destination. You can basically get away with anything out there and looking out over the valley gives you a true sense of being off the grid.

Dirt Ron taking a quick dip in the deep end.

Dean with a double peg grind over the stairs that once graced the cover of GO magazine in the February 1992 issue (Dave Clymer).

At that point we did what any sensible people would do. We started a fire burning whatever scrap wood we could find, got some good music going and fueled up on beer as we all talked a bunch of shit into the night. As the hours passed, the need to ride became more apparent than ever. The stories of the legends that carved and aired this pool before us stoked the crew out to the point where sleep was deemed necessary only to fill in the time between that very moment and when the sun came up.

While Dean and Dirt Ron were filming, Dirt Ron got a flat so Dean did what any BMX lifer would do and gave up his back wheel so the session could go on. Dirt Ron got stoked on that and laid her flat for the camera right after.

“The Nude Bowl was a weird thing for me. I remember seeing pictures of Blyther and Wilkerson blasting it but aside from that I knew nothing. It had been filled in for so long that it was dead to me and not even on my radar. It was just another pool that had been buried alive. The reason it was so special to me is that it was on my 'bucket list' but I never knew it would be on there. Thanks to the two skaters who put in work to allow me to check that one off the list.”

Fast plants are timeless and always fun to shoot. Dean with proper form.

We woke at first light, and all took in the scenery at our own pace until it was time to ride. Even after staring right at it in broad daylight, it still didn’t sink in that we were about to ride a pool that had previously sat buried for fifteen years. It was a session for the ages as we all took turns taking runs non-stop for the first hour or so. We rode from the time we could actually see enough to until the late afternoon only stopping to hydrate. The stoke was on high and as far as the pool was concerned, the water temperature was just right. Throughout the day I did my best to capture some moments between runs and kept a laid back attitude about what I was shooting as to not interfere with the vibe that had been previously established. We rode until we were exhausted and sun burnt.

Dean soaking in all that is the Nude Bowl.

“The Nude Bowl to me is the most iconic Skate/BMX pool in the world. The classic left handed kidney shape, the location, and its history really makes it special. I never would have thought in a million years I'd actually be able to ride it. Words, photos, or videos will never be able to do the Nude Bowl justice. If you really want to experience its legacy get out there and make it happen, you won't regret it. Come and go like the wind. Help preserve this historical spot and it might be around for a couple more years.”

As we packed up and got ready to leave the pool for the next ones willing to make the trek I couldn’t help but feel an overwhelming sense of accomplishment. A few days time well spent if you ask me. It was as if we attained this once thought unobtainable goal. It is not every day that you come across a pool that has been dug out after well over a decade of being remembered only by photos and videos of the past. There is a certain mystique that goes along with pool riding and sometimes you roll the dice not knowing whether a spot is actually going to be rideable or not when you show up. The fate of the Nude Bowl is undetermined at this point and who knows how long it will be around in its second life so if you ever wanted a piece of BMX history, it’s there for the taking…Or is it?

Disclaimer: This trip, article, and entire experience would have never happened without the help of the madmen who went on a mission to dig the son-of-a-bitch out and breathe life back into it. It’s hard to say for sure but rumor has it a few skateboarders went in on it and made emptying it a reality. A big thanks goes out to them, as well as any and all pool enthusiasts that have ever bucketed, swept, emptied, cleaned and mopped their way into a session. 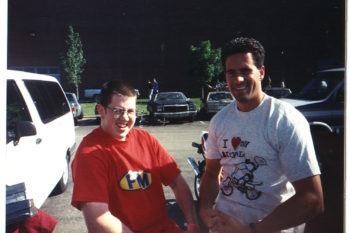 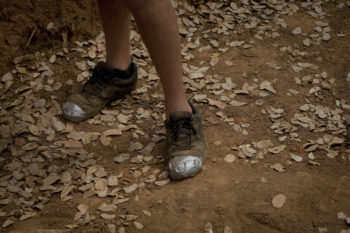 POW Trails - What It Takes

Success can be pretty subjective for a set of trails.