POW Trails - What It Takes

Success can be pretty subjective for a set of trails.

Every set of decent trails has some factors that make them successful. Besides the three basic trail tenants of good dirt, downhill, water source, theres quite a bit more as to why a set of trails sprouts, establishes, and allows for roasting over a period of time. As locals put their time in and make choices on how to create and manage their spot, they lay the foundation that 'flarfs' the future for the trails.

POW trails have been maintained over the years with the slow but simple creek and bucket method.

Success can be pretty subjective for a set of trails. For POW, it has been about fun. Digging trails with your best friends should be fun, just like riding them, and if they're not fun rebuild them. If Jeremy, Marcus, and Aaron were concerned about having a shit ton of jumps they could have put in a new line each year. Instead they modded their one line every year, until it was perfect, along the way they got a second one in there for good measure. This was the difference with POW. As long as it didn't scare the piss out of you first, you could ride that one line all day it was that fun, and worked that good.

Aaron Day laying it flat on “Bottoms up.”

Marcus O’Brien sailing over “Snake River” with Jeremy Kaiser close on his tail.

At first I didn't really understand the whole approach, stuff kept getting rebuilt, one line?  The first set of jumps we all built together prior to POW, we just kept adding more jumps. As long as they worked, we just built more. Being a part-timer now, I'd come back in the fall or early spring and help re-surface some jumps, and kind of wonder why the trails were only that one or two line setup (maybe I should have dug more). The trails were always good, but by the last two seasons of POW, it was obvious they had built exactly what they wanted to ride, and it was badass.

At one point the trails were in jeopardy of being plowed. Somehow they convinced the city to turn it into a public park.

That is what made POW a success, fun. Any attention the POW crew has summoned is most likely their irreverent attitude towards responsibility, focus on good times, and solid roasting. Being located way up in Jefferson State at the tip of Northern California, there's not much going on up there. Unless you're into riding trails, partying, and jumping off shit into sweet swimming holes Jefferson State doesn't have much to offer the typical visitor.  For those who did trickle in, good times were shown.

The arch of the air, Marcus O’Brien followed by Jeremy Kaiser. POW Trails.

Any attention the POW crew has summoned is most likely their irreverent attitude towards responsibility, focus on good times, and solid roasting.

Located on the main freeway that runs the entire length of the west coast, the trails in Jefferson State have been a easy stop for most trail riders on the road. When Bobby, the MMA fighter living in the last house next to the trails let Jeremy and Jesse start renting out half of the two car shop right next to the trails it was the mortar between the bricks for the trails, or so it seemed. Shortly after renting the 'Frat' Jeremy and Jesse put their day jobs to use for them and dialed in living quarters with rooms, electric, shower, and toilet...DIY bitches. Now that the Frat was in place, there was room for most any passerby trail rider, and most were welcome. Through out the years, the red clay of Jefferson State has played host to some great trail riders near and far, from England, PA, WA, OR, and more. Playing host to good times, more and more visitors came, the trails got approved by the city, along with the dialed Frat setup and annual Christmas Party, Halloween / Spring Jams, the scene was thriving.

'Midget' Cory Walters spinning a can-can table way up in the trees.

The seemingly slow progress for POW was finally over-shadowed by the success of a thriving set of trails, attracting top notch riders, some product hookups from a few companies, and the satisfaction of roasting hand built dubs with your best friends. Now it's not to say that these were the reasons POW was built, these were just the subsidiary things that a great set of trails attracted. In true trail builder fashion Jeremy, Marcus, and Aaron would be, and still are building jumps regardless of these potential motivations, they build trails because it is who they are, and they love to roast.

Shortly after the release of their second video and premiere "Welcome Back to Jefferson State" the POW trails were plowed.  Like any set of trails it takes so much more than the three basic trail tenants to keep a good set going, some are around longer than others. No matter how dialed the situation is that surrounds your set, there is the ever-present knowing they could be gone tomorrow. POW is kind of like that Willie Nelson song though, 'the road goes on forever and the party never ends...' These dudes are gonna keep on gettin rad for quite a few more years, tip a few back with them sometime, and hopefully you get a chance to roast some dubs in Jefferson State, you'll enjoy yourself.

Dave Reuss frequently makes trips down from Oregon to his hometown for the evening roast. POW Trails

These dudes are gonna keep on gettin rad for quite a few more years...

Getting those last laps in, 'Midget' Cory tucks a spin way up in the branches at POW. 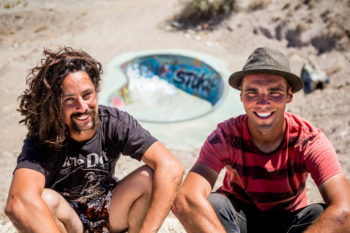 The Second Coming of the Nude Bowl

"so if you ever wanted a piece of BMX history, it’s there for the taking…Or is it?" 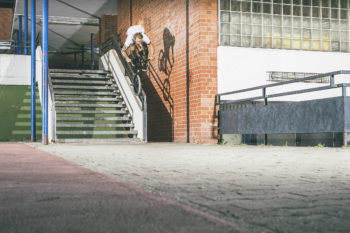 Nathan Williams - A Year In The Life

And what a year!