I’d heard of Travis before the Odyssey Miami trip, but didn’t really know much about him or had seen much or any of his riding. With the backing of three prestigious brands, I knew there had to be something to him. After witnessing his riding firsthand, I realized immediately that he was not just a regular young AM rider being groomed for a PRO career: he was ready now. He rode like someone 5 years his senior, and was fun enough to be around that I knew he would travel with a team well.

Unfortunately, Travis fell victim to a plague-like sickness during the trip that cut his riding short. I wish he was 100%, especially after seeing his subsequent welcome to Odyssey Pro video. This kid is the future - now. Pay attention.

DIG caught up with Travis to get the scoop.

How old are you?

How did you get into BMX? Who did you ride with?

I had a stepbrother around the age of seven or eight and we would go build dirt jumps after school and have the time of our lives... I miss those days.

Who was the first legit BMXer you saw?

Who’s influenced your riding the most?

Describe your life day to day.

I currently live with my grandparents and couldn't have it any better. Wake up, do about an hour or two of school work then hit up Sauce and go film with @thecommondays fam until it's dark... go home and press repeat.

What’s the one thing you think about most?

How can I be more productive?

What was the last non-BMX thing you learned?

The last 20 words of my vocabulary packet.

Are you healthy? Food, drugs, alcohol?

As healthy as I can be but I wouldn't pass up Del Taco if it was in front of me.

How’d you get noticed?

The Vital edit that Francis Castro filmed when I was 14.

Are you still in school?

A team effort, Travis needed a few goes to land this whip. Security was trying to shut us down but the Odyssey team created a human shield to make room.

"What can't I stand about riding? Trying a flat ledge clip for three hours."

What's your favorite thing about riding?

Landing something scary - nothing beats the feeling.

What can't you stand about riding?

If you could go riding with anyone on earth who would it be?

To have style and not look boring.

Have you ever done something in a video part that you really regret?

I'M GOING TO THROW YOU IN THE WATER! - More Info 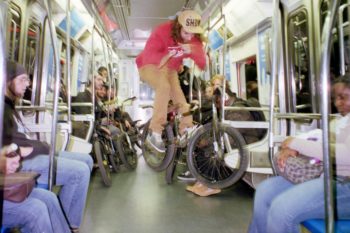 'A Book About Street Riding' 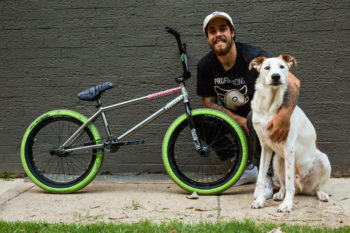