'A Book About Street Riding'

Before the demise of @polejams, I naturally found myself spending more time than any person should on Instagram everyday. After a while of being glued to my phone non-stop, I realized there were tons of people in BMX who also happened to be interested in photography, and in a lot of cases, were quite good at it. Seeing all these really dope photos mostly just getting used for Instagram posts everyday was crazy to me. I started thinking it would be cool if there was some sort of platform where if they chose to, anybody could have their art or photography featured...

The idea to do a submission zine is nothing groundbreaking, let me be the first to say that. There’s this small publishing company called NightedLife that put’s out monthly submission-based zine’s, it’s all 100% analog and really well done. Anyways, I had ordered a book from them a week or so before and when I opened up my mailbox and saw their zine sitting there it was like my brain exploded!. I’ve always wanted to make a book to show the grittier side of street riding and the interesting situations one can come across, but the submission idea hadn’t ever come to mind somehow and it was really the only way to do the topic justice I think. I had only put out a book of my own photography for ‘BADV3NTURES’ at that point and after a few phone calls it really just seemed like the natural next step after it seemed possible. I pretty much started working on it that evening, and started trying to get word out a few days later. Originally, the plan was to keep it down to 40 pages with 10 contributing photographers. After a month of taking submission’s, I ended up with 26 photographers from all over the place, covering 52 pages.

With some people there's an on-going discussion about whether or not a print publication is relevant in BMX nowadays. I don’t want to sound like some sort of print-harpy so I’ll keep it short. I think the recent uprise of little zine brands, individuals, crew’s and even newly formed magazines producing printed matter is proof enough that there is still a place for print and likely always will be. It’s really cool to see rider’s continuing to keep things in their own hand’s after most of the larger magazines we had ceased production, just people working on project’s and contributing to our culture in their own way. That’ something we need more of I think. - MG

‘Uphill Work’ is available through a local art and zine collective called ‘The Buster Collective’, coincidentally half run by a BMX rider. They’ve got a really good thing going, they’ve been really supportive with everything so large large shouts to them. It’s also up on 90East’s webstore for everyone in the US.

You can hit @BADV3NTURES and @TheBusterCollective on Instagram, to keep up with future projects.

Photo by By Agus Glauber.

‘Uphill Work; A Book About Street Riding’ is available for purchase worldwide at; www.BADV3NTURES.org and www.TheBusterCollective.bigcartel.com 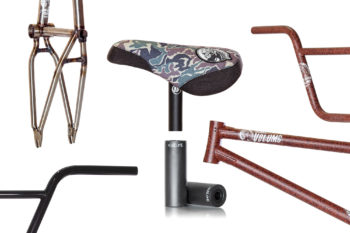