Even filming a commercial can be all in good fun!

This set of three separate photo galleries portrays what BMX is all about in today's age. The BMX community as a whole is so vast all over the country, not to mention the world, but on a day like this we all come together for the greater good, to achieve a common goal. Through the lenses of photographers, Chris Mortenson, Jeremy Pavia and myself you will see three different aspects of the days activities. Represented by digital and 35mm photographs, we show the different perspectives on which one event can be viewed and isn't that how the industry is today? Filled with different perspectives on the same thing...BMX. From snapshots to riding photos to candid images of your favorite riders, enjoy these photos just as they are, the reflection of a strong community we call home.

I have only heard of Thee Block Saturdaze cruises, since my absence from California has kept me from enjoying those weekly jams... So on this particular Saturday, I had a great chance to catch up with everyone and see what the Los Angeles scene has been up to and what new faces are out there making a name for themselves! To say the least I was pleasantly surprised at the overwhelming amount of kids riding BMX together just for the sake of good weather and the common goal of helping wrap up The Street Series and Monster Energy BMXDAY commercial! It is such a great sight to see what Thee Block has been putting back into the BMX community since the grand opening of their shop located at 1108 N Kenmore Ave in Los Angeles, California. Tony Neyer and Aaron Brenner are the back bone of the shop and help support their community as much as they can. Thee Block crew was the Monster Energy's team city guides for the week, assisting in location filming and even adding their own DIY ideas to the spots that were inline for Saturday's filming to make the session that much more unique to the day! - Wes McGrath

I actually didn’t know if I was going to be able to make it to the jam as I had just got back from a week long shoot the day before but I ended up being able to work it out and spent the day behind the lens. Before I headed out I actually wasn’t sure which camera(s) to shoot with and what gear to bring so I just kept it simple and settled on one of my favorite film cameras. An old 35mm Ricoh with a 50mm 1.4 Pentax lens loaded with some Fujifilm. Shooting with film is an entirely different experience and the anticipation to see the images is something that will never get old. Even after fifteen plus years it’s still just as rad to see the negatives and images for the first time as it has ever been. The thing I enjoy about shooting film is that I when I do I’m not looking for perfection, and since you don’t know what an image will look like until you get the film developed, it makes me focus much less on the shot I just took and focus more on being ready to get the next one. Sometimes images come back soft and out of focus, sometimes you get unwanted motion blur, sometimes an image might not come out at all, sometimes the color is way off, but at the end of the day that is what makes film stand on its own. The imperfections all add to the overall feel and that’s what matters most. As far as the jam goes, Thee Block and the Monster crew really came together and put on an event to remember. Much respect goes out to everyone involved in making that happen. The whole time I just kept looking around at the younger riders and just thinking about how insane it was to be riding the same spots with some of the most bad ass pro riders putting work in the streets these days. Days like these always serve as a reminder to support your local scene. Getting riders together for events, or just sessions in general, no matter how big or small, is an amazing way to experience BMX in its purest form. - Jeremy Pavia

Thee Block 'Saturdaze' cruise in my opinion is the best part of the week out here in LA. It's a chance for kids to meet up, get a little loose and just enjoy riding bmx. I have been documenting it for the past couple months and seeing the level of riding that the LA scene is at right now is truly inspiring. This past Saturday cruise for the Monster Energy / Street Series commercial had to be one of the best to date. You get three hundred kids on bmx bikes, some brand new DIY spots and you're going to have an amazing time. For me the jam had such good energy surrounding it that I just wanted to capture that and enjoy cruising with all the homies. Shout out to Monster and Thee Block for throwing such an amazing event. Till next time! - Chris Mortenson 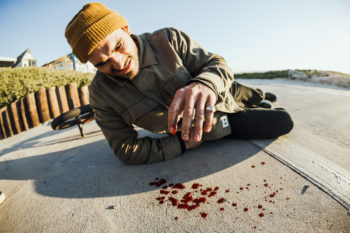 Setups: One Day In LA With Dakota Roche

A Perfect Day For A Bike Check 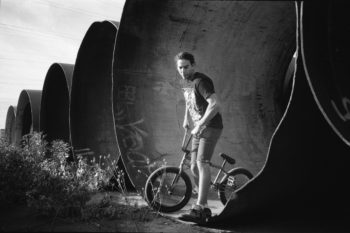