December, 2011: It was a bleak, very overcast day in late 2011 in Redondo Beach, California. I had just moved across the country from the East Coast and was a bit lost, disconnected from the culture and familiar surroundings I had grown to love. The week I had moved, a few days before Thanksgiving Day of 2011, Washington D.C. label Dischord Records had released a new album from a band called Office of Future Plans. I didn’t know the band’s work — I only knew that it was the latest project of J. Robbins, formerly of Jawbox, Burning Airlines and Channels, all bands I had championed and loved in my late teens, 20s and 30s.

I had found the local train station in Redondo Beach. I was doing manuals on the curbs, and I pressed play on my iPod Shuffle. The first lyrics of the album, (“In the kingdom of the dead/we don’t talk about the weather”) hooked me. I was new blood in an alien place, listening to music from an artist that had accompanied my life for 20 years, in search of familiarity. J. Robbins and the Office of Future Plans record was unknowingly comforting that cross country transition for me. I needed an old friend on that day.

Musician/producer J. Robbins first entered the public spectrum in the late 1980s as the final bass player in the Washington D.C. based band Government Issue. The band, which had begun in 1980, was on its last legs as a fully-functioning entity. Following a van accident, the band called it quits. Robbins returned months later with a new band called Jawbox, featuring bassist Kim Colletta and drummer Adam Wade. The new trio released a song on a Maximumrocknroll compilation, followed by an EP on D.C.’s Desoto Records. Jawbox moved to Dischord Records, released two albums, added a second guitarist and enjoyed a wealth of success before making a controversial move to Atlantic Records, releasing “For Your Own Special Sweetheart” in 1993.

The switch, following a Nirvana-fueled major label dive into the underground in the early 1990s, seemingly split Jawbox’s fandom into for and against camps. The word “sellout” was thrown around, Jawbox toured for six weeks with Stone Temple Pilots, and portions of their music ended up as background soundtrack on TV shows such as “My So-Called Life.”

But Jawbox endured as a major label misfit adhering to their punk rock upbringing, never leaving the van and continuing to tour through the mid ‘90s. Following a major label shift to Tag Recordings in 1996, Jawbox released their final eponymous album, and were subsequently dropped from the label soon after. The band summarily called it quits in early 1997. At the time, Robbins had also entered into the realm of recording and producing, working with bands such as Texas Is The Reason, The Promise Ring, Braid, The Dismemberment Plan, Bluetip, At The Drive-In and Jimmy Eat World, splitting his time between songwriting and production. But Robbins returned barely a year later with Jawbox guitarist Bill Barbot and former Government Issue drummer Pete Moffett in a new trio dubbed Burning Airlines. Burning Airlines almost immediately released a few EPs and a full-length on Desoto Records, returning to a more traditional “underground” approach of independent distribution, touring and promotion amid the dawn of the digital age. The formula, a more stripped-down and direct approach to Robbins’ songwriting, resulted in a follow-up record, followed by an unceremonious end to the band in 2002. Robbins had a sort of a-ha moment not long after 9/11, deciding he was ready for a change. He chose to focus on being at home in Baltimore, Maryland, concentrating on his recording and production outlets in a new studio dubbed The Magpie Cage.

A year later, the U.S. invaded Iraq. Robbins’ former lyrics in Jawbox and Burning Airlines, had perviously taken on a more personal, interpretative approach. But with shifting political landscapes, and Robbins’ literary bases in science fiction, his songwriting also shifted as he introduced a new band titled Channels, featuring wife Janet Morgan on bass and former Kerosene 454 drummer Darren Zentek on drums. The new trio released an EP in 2004, influenced by end of the world scenarios amid the Patriot Act, shifting border policies and then-alternative facts regarding weapons of mass destruction. The signature J. Robbins sound remained, but the times were changing and the EP reflected Robbins’ reactions to the Bush administration. Two years later, Robbins’ returned with Channels to release “Waiting For The Next End of The World” on Dischord Records. It was sparse, low end, live and as politically direct as Robbins had ever come in his songwriting.

Shortly after, Robbins and Morgan gave birth to a song, Callum, who was diagnosed with Spinal Muscular Atrophy Type 1, a disease that affects the motor nerve cells in the spinal cord. “I mean basically the last show that we played was the day before we got Cal’s diagnosis,” Robbins told Brooklyn Vegan in 2009. “And once we got the diagnosis, it’s just completely reordered our priorities, as you might expect.” Channels went on indefinite hiatus as the Robbins family focused on care for their song, while juggling full-time studio work with the Magpie Cage. “I don’t have family, my parents are both deceased and my wife’s family lives in England,” says Robbins. “So really, it’s on us as far as taking care of him, so it’s just logistically been a nightmare to try and do anything. It’s not like we’re saying the band is broken up but there’s just no practical way for us to engage in it and get any kind of creative momentum going.”

Priorities had shifted, but Robbins continued to write music in his spare time, first as solo outlets and later as Office of Future Plans, a band that was never supposed to be a band. Robbins was invited to play a solo show in Chicago in 2009, and asked Channels drummer Darren Zentek, along with cellist Gordon Withers and bassist Brooks Harlan, to join him on stage. An EP followed, along with a self-titled full-length on Dischord in 2011 that retained the signature urgency of Robbins’ songwriting with personally political lyrics that took as much from Ray Bradbury as it did from the Bush administration. That album also brought me to the point of re-engaging with Robbins’ music as I moved across the country and needed an old friend.

Over the past several years, Robbins took to introspection, re-examining songs from his past, and recording new, stripped down versions of them for his Bandcamp page. He took from Jawbox, Burning Airlines and Office of Future Plans, but left Channels untouched. He followed with two EPs under his own name in 2016, continuing to create amid a demanding recording schedule and caring for his son Callum, who is now 11 years old, in 5th grade, and an avid video gamer.

January 20, 2017: Trump is inaugurated as the 45th president of the United States, and Channels emerges out of hiatus after ten years with a two-song EP available directly from Bandcamp and Dischord Records. The first track is called “Backpfeifengesicht” and it loosely translates as “a face in search of a lead pipe.” It’s angry, it’s aggressive and it’s the latest chapter of my relationship with J. Robbins as a friend on the fringe, reminding the listener to be vigilant in the face of government while mirroring the idiocy of Trump’s regime. I buy the EP on Bandcamp in Aspen, Colorado and file it away during work hours, then turn it on in the airport. I’m in different place than I was when I needed that infusion from Office of Future Plans in 2011. That sense of being lost remains, but it’s more political than personal, and I’m far from alone.

I retain an enduring friend in the shape of J. Robbins’ music. - BT 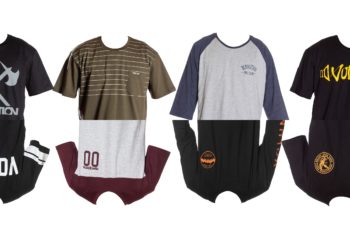 Look fresh for summer in these new threads 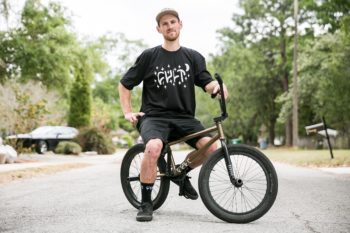