Zack Gerber - Why BMX Is My Middle Finger To Authority

My got my first BMX bicycle after being hit by a car. I was twelve, and I would hide my twenty-four inch mountain bike behind a tree where our school bus would drop us off so I could pedal it home. Along the way, I'd use driveways that were cut into the hillside giving them a little drop in and a fly out. This was my weekly routine until one fall afternoon everything changed. My friend Andy would ride home with me, and on that particular day we decided to race to his house. I managed to boom the first several drive way jumps and come out victorious. The finish line was my older friend Matt's house where a couple of large, six-foot tall bushes divided their house from the road. After successfully beating Andy to Matt's house, I sped onto the street without even a glance.

My victorious ego was met with a speeding 1994 Jeep Wrangler traveling 25mph down the roadway. I momentarily blacked out as my body hurdled through the air and came to a rolling stop as the jeep screeched to a halt. I was bleeding from my elbows, knees and face and my bike some fifteen feet away from me in a twisted mess. Dazed, I stood up and walked over to my bike to see my frame was bent into a semi-circle and the forks and rear triangle bent in and nearly rubbing the spokes of the wheels. I yanked the chain from the detangler and began to attempt to put my chain back over the sprocket. I was met with the frantic shouts of a woman. She was in tears and asked if I was fine repeatedly. She dashed to the nearest house and called 911. Not many people had cell phones when I was twelve.

The police arrived and took my older brother Curt, who was babysitting me, and myself to the hospital. Nothing but some bumps, bruises and some good, old-fashioned road rash. I was cleared from the hospital in only a few hours. However, the next few days after being hit by a car were crazy. I always thought it was something I'd only see in cartoons where a lawyer chases down and follows an ambulance, but that's what was happening with our family. We had calls for weeks to sue the driver of the jeep, but I'm fortunate enough to have grown up in a family that doesn't believe in lawsuits. Instead we met with the owner/operator of the jeep who was actually my neighbor from across the street. All I wanted was a new bike, and those were the terms we came to at the meeting. With that, we set off the next day to get me a new bicycle.

I remember my parents showing me the mountain bikes with their fancy suspension and disk brakes, but I had my mind set on the BMX bike I had seen in the window. It was a burgundy Schwinn Predator, and I loved it. I also remember buying some SkyWay screw-on pegs, just two of them, and I put them in the front. I had no idea what BMX was at the time, but I knew I'd found something I loved from the moment I pedaled that bike down my street.

That was 17 years ago. I've been through a lot with BMX and was around when Criminal Mischief first came out. I was there when the bikes weighed forty pounds and I weighed maybe eighty pounds trying to learn bunny hops. I've been there when BMX had a fashion problem and everyone had girl pants. I was even there when everything become too light and wasn't even safe to ride. Remember drilling holes in your rims? I was there, but I never and will never lose the fire that BMX started in me that day and it's only increased with time.

Short steep ledges and a nice stair set separating the two seems to be a perfect spot for Zack to get sideways.

I was truly concreted into BMX when I got my hands on Criminal Mischief. At the time I was a teenager, and all my angst was taken out through destructive and vandalistic behavior. When I saw Criminal Mischief, it gave me a home for my anger, disrespect for authority, and gave all of my destructive behavior purpose. FBM's Albert Street and All Time Low, concreted my mind into what and how I would BMX. I knew then that I was in for life. I found my home.

To this day I use my bike as a method to vent and escape the pressures of real life. BMX is my middle finger to authority and the socially acceptable. I still find my behavior mimicking videos of BMX's past. When I'm out riding, I will smash a bottle I find on the street. That's my way of saying, 'fuck you to your socially acceptable behavior and thought process'. I have smashed beer bottles over my head sober, and even eaten a light bulb to be like Lou Bickel. I've gone to actual stunt classes where I was taught to do full body burns and drive cars. I've done a lot and continue to do a lot, because to me, that is what BMX is. We are different. Not accepting and embracing these differences makes us the same as them, the collective 'they', and that is something I am not willing to let be accepted within BMX. We are not them, we are us, we are different, and we will never be them. No matter what career you choose. I have a bachelor's degree and manage a multi-million dollar company as a day job, but the moment I'm off work I become a scumbag. I've learned you can live two lives. The first is the life they see, the properly dressed and groomed life, that's always on time for work and works hard. The second is that anti-social hellion you become the moment you leave the office. You change into clothes that make you appear to relate closer to a homeless bum than a stable minded member of society. You hold your middle finger up to authority because they don't control you. You control you.

Zack gets upside down under a bridge spot called 'The Underground' in Jersey City, NJ

To me, It'll never change because BMX embedded this split lifestyle into my head. BMX taught me to play it off as some kind of innocent activity that your parents could smile at thinking you were getting some exercise being outside. While all along you were hiding BMX's reality: the fringe of society's behavior that would give any mother grey hair, through excessive drinking to drug usage, blatant vandalism or debauchery. You were taught to walk the line, to play the game, to present BMX as wholesome family fun. In reality, all your teenage mind wanted to do was contribute to the mayhem and destruction. The only difference now, is that most individuals my age have given into living on one side of the fence choosing the wholesome, family ideal. While I, and a few others, still walk the fine line between civility and disobedience. -ZG

"You were taught to walk the line, to play the game, to present BMX as wholesome family fun. In reality, all your teenage mind wanted to do was contribute to the mayhem and destruction." 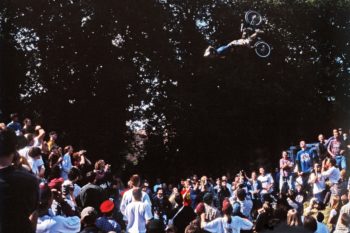 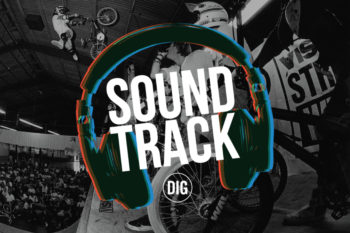 More Classics From The Condor