1. One of the 'overseas professional riders' experienced a night of passion at the jam, resulting in the birth of twins 9 months later.

2. The name and the vibe of the event was heavily influenced by the infamous Mons Ramp Jam held in the '80s and organized by Mon Barbour.

3. We actually intended to put on a Backyard Jam in 1990 but the BMX events calendar was so full up with other events by the UKBFA (United Kingdom Bicycle Freestyle Association) that we had to postpone it to the following year.

4. During the early jams we'd often have to literally pull Tom Lynch (BMXer and qualified medic) from the crowd as we'd forgotten to arrange for any official ambulance medics. Thank you once again Tom! (Editor's note: Tom went on to create the world's first cycle mounted paramedic service.)

5. When asked by immigration why he was in the UK back in '94 Dave Clymer replied, "I've come here to flip to the chasm". He kept to his word and did little else apart from this.

6. One year there were so many riders from America and other countries attending that we'd hear that Customs officials at the airport (in London) were saying to riders, "Oh yeah, you're here for that BMX event…"

7. After returning from the Crypt (post jam party venue) on Saturday night in 1996, Mark Richards (legendary Backyard Jam filmer/editor) got jumped on by a couple of thugs who proceeded to take his video camera containing the footage of that day's dirt jumping event. After extensive pleading Mark managed to get both the tapes and camera back!

9. Shortly before we were due to hold the 1992 Jam, the Hastings council deemed that the 36 foot wide 11 foot high halfpipe was unsafe and was torn down. This resulted in us having to hire a much smaller ramp from Peter Noble (father of Ride UK founder Mark Noble)

The early years. Ian Morris with a fakie t-bog on the infamous midi ramp circa '93. Photo by Damien Elliott

Morgan Wade blastin' at the last ever jam. Sheffield 2006. Photo by Ricky Adam

Where and when were they held?

Why did you start doing them in the first place?

It just seemed like BMX in the UK had such a close knit scene of friends and riders so why not invite everyone down to Hastings to ride the halfpipe and midi ramp.

How come they stopped first time round?

By '97 the events had just got out of control! The daytime was fine... it was the night time that we weren't equipped for.

How many people were actually showing up?

What's the best quote you remember

Random Mum - "My son is 16 and he and his friends want to come to the Jam. It's their first time away from home and I want to check that they'll be OK".

Stuart King, Backyard Jam, Hastings '94. If you look closely you can see Dave Parrick starting to film for the Empire DVD. - Photo by Percy Dean

Bish Bosh. Local toilet attendant Dave Bishop and some flailing limbs for the masses. Maybe they'd heard about it on Twitter. Makes you think eh? Photo by Percy Dean

Where the fuck is Joey Spinoza even going? The original wildman killing the chasm at the 1994 jam. Photo by Percy Dean 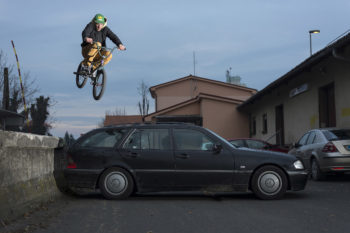 Shajba - A Story Of BMX In Slovenia 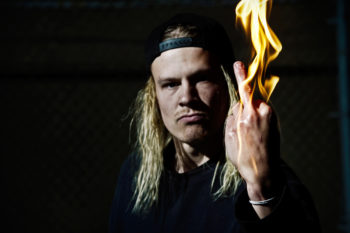 Zack Gerber - Why BMX Is My Middle Finger To Authority