Behind the curtains of their new video project

2016 has been a heavy year for full-length videos; Still United, Common Crew, BSD 'Transmission' and more recently the Sunday's ‘Grow Up’ video have all helped to hammer home the importance of these lengthy and financially un-forgiving projects. Despite most peoples views on how brands are focusing more on web content we actually think there is a general shift in how brands are approaching videos for the digital world.

Wethepeople have been filming since the start of 2016 in different capacities and on trips with filmer Cal Earnshaw for a project they describe as ‘another video project’. We spoke to them about the upcoming and eagerly awaited ‘Foundation’.

Crewed up in the South of England.

"The project we titled as Foundation begun in January this year and it started without a real plan or even any real direction, it actually started like many projects do - with a road trip. Sicily (Italy) of all places was our first trip in regards to filming for foundation, and for some of the crew it was a trip they have mixed feelings about. Finding spots in Sicily was unusually difficult, and it got to a point where most of the crew was genuinely confused by the lack of them. Luckily the guys were staying in a hostel with a karaoke bar and of course the sun was shining in January. After Sicily it was clear that everyone wanted to work on something longer, from a team managers point of view I also wanted something on a bigger scale but in the interest of the brand I needed to keep that online content flowing because let’s face it, it’s cut throat out there. The next filming trip would be Lyon, France and an opportunity to get retribution on Sicily and ride some real spots. From Lyon we kept the ball rolling and went to Spain, then Greece, Latvia, and Germany and back to Spain again. We just kept filming and made the rest up as we went along."

Deciding what to do...

"Every rider wants to film a full length; it’s not even a question that needs to be asked. The logistics though are much harder when you’re a brand who has a global team of riders instead of a group of friends who all live near each other. Deciding and debating what to do with foundation lasted months, first we wanted to put out a short and sweet 10 minute video, then we wanted something a bit longer and to stream it live, all the while – in the backs of our minds we wanted something more, but how much more. Looking back on the year it’s been like any other video project, some highs and some lows, some dudes struggled and some thrived. Just last month Dillon broke his foot, so his section has been cut short. Ed had a weird 3 days in the U.K where he gave up coffee and couldn’t actually ride; on the 4th

"I’ve honestly enjoyed every second of this, even the times when I was a couple of hours deep into filming a clip and freaking out"

"Originally we had planned to release this in October, but as time passed and trips went by we soon realized this was not going to be possible. A rushed project is generally a bad project and when each rider is literally hurling themselves down stairs and rails you can’t end up scrimping on the end product. So we extended to early 2017, giving more time for riders to get what they need and more time for Cal to work on editing. The thing about a deadline is that once you set it you start to feel the pressure, I think we all did a little. Then when you extend it you sit back and think there’s plenty of time, that’s when it catches up and…well, you get the circle, its vicious. We also never really labeled this as a ‘full length’; we didn’t plan to film for 2 or 3 years - we just set about filming another video project."

Another day in sunny Spain.

"Ed had a weird 3 days in the U.K where he gave up coffee and couldn’t actually ride; on the 4th day he snapped, drank a cappuccino with 3 shots and accumulated 4 solid clips into the bank"

If you just caught a prized fish then you are obliged to take a photo of it. Same rules.

Max checking his clip before he heads back to the bank on Monday.

"The name took forever and I don’t even know where it came from or who said it. We threw a few things around in a group text; one of them was ‘Bad Decisions’ due to most of us making many of them during a trip to New York in 2015. I am really happy with Foundation though, I think what it represents is cool, and since some of the riders such as Jordan Godwin, Dan Kruk and Felix Prangenberg this will be their first real part. I don't know, it seems fitting."

Without the clip check there would be no day or night.

Get your clip, get your drink.

Making friends while on holiday is great.

"Me and Cal smashing Pokémon Go was a highlight"

"Cal Earnshaw was on board with us way before we started filming for this but as the months passed he would often call me up and say things like “so what’s happening then?” and “where we going next?”. I would often say things like “I don’t know right now” and “Just bank it all Cal”. I'm personally thankful to be able to be working with someone like Cal who can roll with whatever decisions we make, whatever turns we take. I think when you embark on a project, no matter how good your plan is you are always going to divert from it."

"I found this perfect wall ride setup on my way from the airport to the apartment. I had to try it right away"

Ed Zunda, June 2016. Barcelona. It was real hot that day, one of those days where you can't avoid the heat, and taking the metro becomes unbearable.

"A year on and this project will have taken us to Italy, France, Great Britain, Germany, Riga, Greece, and Spain. I’ve personally seen some things done on a bike that I never thought I would see and I'm stoked for the world to also see." 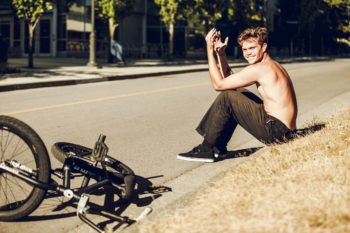 Freak Out: Devon Smillie in Vancouver 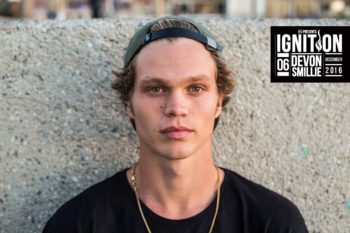 “I was basically brainwashed in the best way possible.”