The main man behind the lens of the awesome 2019 LUX 'Aeterna' DVD gives us some insight into what it took to create such a memorable project. Here's 5 things that stood out for the multi-talented Mike Vockenson.

Chapter 1: The right place at the right time.

It was around 2009 and a new indoor skatepark had just opened up in Brisbane. One night, myself and Samson (who features in Aeterna and who’s been one of my longest running BMX friends) were having a yarn with Mitch Wood (LUX co-owner) when he excitedly told us that he and a partner were going to start a bike shop in Brisbane and call it LUX. Fast forward ten years and that shop is still here and has expanded—as in, expanded to where LUX is now a huge part of the BMX scene.

Not up until 2016 was the idea of a DVD seriously contemplated. During a team birthday dinner one night, Mitch tantalisingly dangled the idea of a DVD to gauge interest. Obviously, the idea was devoured. I found myself in the right place at the right time and, importantly, with enough motivation to take control of the project. We spoke about logistics, the format, and who would be willing to work on full parts (which changed quite a lot throughout, ha). There was even a travel budget which, at the time, seemed incredible to me. This was the real deal.

↑ Denby Chandler - UQ Brisbane Crooks—ain’t nothing but a thang. Denby continued to amaze me with his big-rail balls. Wasn’t more than a few run-ups and pup was off and away. Photo by Jerry Vandervalk.

Chapter 2: Fuck, it was exciting.

Growing up on Props, the idea of being able to work on a full-length project, having the resources to travel with, and having back-end assistance from Mitch (who is a tech wizard), this project was honestly a dream come true. Plus, it wasn’t just under the Crispy banner, this was for LUX. I had to put on my big-boy serious hat.

Anyway, there are a few things worth pointing out which people may not know or understand about this all.

"This scared the shit outta me, but man, the feeling of riding away is like no other."

BMX in Australia is healthy and always growing; however, there is hardly an industry to speak of and very few riders who can get any kind of monetary support. What I’m getting at is that, all the guys—especially those who filmed full parts—put in a lot of work. It took thirty months to make the video as we filmed everything by going out one day a week, at best. I have a wife and a house to look after and I work full-time—as do most of the team riders. As a result, we had to make the most of the time we had. Also, I live a couple hours north of most of the dudes. We really hustled. Respect to the undying devotion and passion the guys shared in working on the project—it would have been a struggle otherwise.

↑ Alex Hiam - Adelaide hand grab thing. Thanks to Mikey and Swamp Man, this was suggested as a spot. Knowing we had Boyd and Alex on tour, a quarter was always a good thing to ride. This was an amazing afternoon high up in the Adelaide hills watching the sun go down while Boyd and Alex got quickly to work on this transition (which actually was a backstop for cricket practice - see right). Photos by Mikey Moore.

It was scary being given the reigns to something which ultimately was not mine. When I make something, I have a very particular way of doing so and I was a bit worried about having to change my style to suit the needs of others. So, after having edited some snippets and showing the LUX guys, hearing them stoked was unbelievably gratifying. It made me feel confident in taking the project in the direction I was envisioning—which was especially important in terms of the soundtrack. I also had the green light to use my shitty old Sonys, as well as (to the slight reluctance of Mitch) Final Cut Pro 7.

Boyd Hilder - Adelaide city dirt nose dip. Such an awesome dirt spot, run by dedicated locals in the middle of the city. We stopped by one afternoon and Boyd was in his element, of which there are many elements. Photo by Mikey Moore.

" What I’m getting at is that, all the guys—especially those who filmed full parts—put in a lot of work. It took thirty months to make the video as we filmed everything by going out one day a week, at best."

Australia is a big, arid, and beautiful place. It takes five hours to fly from one side to the other. I don’t know how many flights we took, but the DVD includes footage from all eight states and territories—which I’m really proud of. Usually the trips would be on a whim. I’d group message a few dudes, get the green light from LUX, and voilà, we’d be on our way. It’s such an incredible feeling to be in a foreign place with your friends and working together on a project that is basically comprised of exploring new cities. To make sure I got all places ticked off the list, I even swindled a cheeky clip or two (including the bathroom scene at the start of my part) with my wife on my honeymoon at Alice Springs (the dead centre of Australia).

To close, I feel very lucky to have the strong support of LUX in making this DVD, as well as to have a team of dudes who are equally passionate. This will be something I can look back on and be proud of and there ain’t nothing more I could ask for. Enjoy.

About that intro photo...

↑ The boys - Denby, Alex, Boyd, Mike on the Adelaide trip. Another reason why working on this project has been so amazing, a bunch of these guys I got to know and spend time with through working on the DVD, it's always really interesting to understand how each dude's mind works in high-pressure situations. This was a more relaxed situation, super memorable moment of the trip for me watching the sun go down with views of the city knowing we all worked really hard that day. Photo by Mikey Moore. 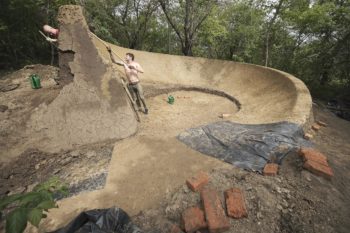 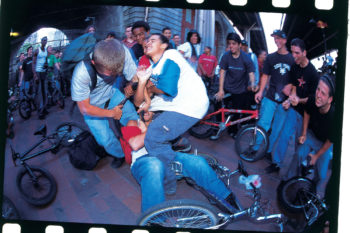