Dennis McCoy - "I'm still riding for both brands that supported me as a teenager, the year I'll be turning 50."

Haro's first Non-Californian eighties recruit talks about the re-ssue of bike he turned pro on and a whole lot more...

It's hard to imagine a career spanning as long as Dennis McCoy's which began in 1986. Not only going on more than 30 years, it's going strong. Which is why it made perfect sense for Haro to do a re-issue of the iconic Master celebrating the third decade since its rollout.

One thing of note that I heard from both Haro and DMC is that this bike was not intended for the stuffy collector to display in an airtight case in a basement, it's fully meant for use. The bike is modernized and just as capable for hard riding as any other bike, so why not put it through the paces? We caught up with the legendary DMC at home in Kansas City recently to session the local parks (you know, like 49 year olds usually do) and talk about the bike and his long term history with Haro and Vans. And man, can he talk...

Well above the Kansas City skyline. If you don't think Dennis' knees are together he will hunt you down.

Tell me about this bike.

The 2016 DMC Master was designed to resemble the Haro I rode in 1986, my first year competing pro, but with modern details and geometry. It made sense to incorporate features like 990 mounts and an integrated headset, despite the fact that they weren't available in 1986. I also felt the old chainstay platforms and bolt-on fork pegs were unnecessary, so we kept it clean instead. The geometry is exactly like the Lineage frame I ride, with a 20.5 inch top tube. DMC Master frames will be released later this year in 3 top tube lengths - 20.5", 20.75" and 21".

How'd it come about?

I sat down in the Haro office with Joe Hawk and John Buultjens in early 2014 because they wanted to discuss tying some products into my history with the brand. Ideas were tossed around, and with 2015 being my 30th year competing pro, we hoped to launch something that year. Since the 30th anniversary of the '86 Master wouldn't arrive till the following year, we first decided to do a very limited run of 30 Lineage frames in black/chrome as a signature colorway for 2015. However, production schedules had them arriving after the comp in Shanghai and X Games, meaning I wouldn't be competing on one.

Vans had something in the works with me as part of their 50th year celebration, reissuing the SK8-Hi's in a colorway I rode back in '86. Jerry Badders arranged for 100 free pairs to be offered with the first 2016 DMC Masters sold, and asked if Haro could get a sample bike ready for 2015 Interbike to display in a cross promotion with Vans.

Haro could, but since the two bike projects now practically overlapped, we decided to make the 2015 black/chrome Lineage a stock colorway and focus on the 2016 DMC Master. This allowed us to move the release date up to March 2016, instead of later in the year. As it turns out, they hit the shops the same month as Vans 50th birthday, and 30 years after my first pro comp in March of 1986.

What does it mean to you?
On a personal level, it takes me back to 1986, a very pivotal year in my life. I was a 19 year old engineering student in early '86 and can remember building up my first green/chrome Master late one night as I multitasked and studied for a physics test, haha. I drove to Ramp City in Minneapolis 3 winter weekends in a row to ride that bike indoors, then back to KC for school. About a month into that semester, an opportunity arose to do 6 weeks of shows in San Diego. My mom suggested I take a short break from school to pursue it, so I withdrew from the university with every intention of doing the demos and returning to school in the fall. Neither of those things would happen.

The shows I'd been offered were at Sea World, and let's just say they seemed a bit more theatrical than I expected, with not enough actual riding, haha. My Haro teammate Marc McGlynn lived in Solana Beach and offered me a place to stay for as long as I wanted. With a vert ramp carved into a hillside in his yard, the ocean nearby, and Roberto's Taco shop a short ride away, it was an easy decision to turn down the demos and accept Marc's invitation. My visit overlapped the first contest of the year, an AFA Masters comp in Carson, CA, where I turned pro and ended up winning the Overall at the event.

Countless other memories were made on that bike, as I rode two legs of the Haro tour. I hit the road with Rich Sigur and Tony Murray, and at our Oklahoma demo I became friends with Mat Hoffman, who was just 14 at the time. I broke my ankle on that bike, but could ride in the cast, and rode NYC on it that June. After my cast was removed, touring resumed with Ron Wilkerson, Brian Blyther and a 16-year-old Spike Jonze who was along for the ride. Spike and I rode San Francisco all night long in August, ending with a session at Embarcadero directly beneath our hotel.

September saw another trip to New York for the Long Island AFA comp, then a trip to Alabama where Wilkerson rolled our rental van, and the AFA Masters Finals where I won the Pro Overall and Flatland titles after a 1-minute run off with R.L. Osborn. The year would end with my first trip overseas and my last comp on that bike, the December '86 Holeshot comp in London

Roasting the deep end on a rare warm day in the final days of the year. No-one else rides this bowl like Dennis.

"I broke my ankle on that bike, but could ride in the cast, and rode NYC on it that June. After my cast was removed, touring resumed with Ron Wilkerson, Brian Blyther and a 16-year-old Spike Jonze who was along for the ride."

Any point in the production did you not see eye-to-eye with Haro?

There was a point early in the process where we needed to choose the component colors and styles for the bike. I rode different shit throughout the year, but my favorite setup was the one I rode at the AFA Finals in November. It had green bars and stem cap, with black cables, seat, seat clamp and chainwheel. I rode one-piece cranks, but tracking down 165mm hollow Sugino's seemed next to impossible, so John and I agreed to remake the Group 1 cranks on the bike pictured in the '86 catalog.

At some point with the project moving full speed ahead, other parts from the catalog bike crept into the picture. I saw a progress photo of the bike with white mags and blue tires and it jumped out as a setup I would never ride. It would have been disingenuous to have my name on a bike with mags and colored tires.

I tried colored tires back in 1980-81, and found they use a softer rubber compound that rides slow and wears out fast. Mag wheels never interested me and I never rode them. I get the nostalgia some people have for them, with epic photos of Wilkerson, Johnson and Hoffman riding mags back in the day, but they're also heavy, flex a bunch and make brakes work like crap. They do make for good swap rock targets though. Sorry Swope, haha.

Spoked wheels and black tires will always stand the test of time and I knew the bike would both sell well and ride well if we kept it legit. John corrected the specs and the finished product is amazing.

How has this bike been received?
The response has been great. They sold out in the first week, which is awesome. I've heard from a lot of old friends hoping to track one down, but I don't even have a production model. I have the prototype displayed at Interbike. Thanks to all those who grabbed one - perhaps we should meet at Washington Square Park one of these days and ride NYC!

Thoughts on being on Haro and Vans after all these years?

DMC insisted we shoot a flatland trick since at the time of the original Master there were little devisions within 'Freestyle'. This brings up a thought: is flat ledge trickery closer in line to street or flatland...?

Trying to recreate the iconic Can Can shot used for branding on the bike. Not hard when you're as dialed as ever.

"Mag wheels never interested me and I never rode them. I get the nostalgia some people have for them, with epic photos of Wilkerson, Johnson and Hoffman riding mags back in the day, but they're also heavy, flex a bunch and make brakes work like crap."

Cranked turndown in the final hours of light.

"Few riders can claim to have had an influence on every discipline and aspect of the modern freestyle scene, as Dennis “DMC” McCoy. Having honed his skills riding with his BMX Brigade on the streets of Kansas City, Haro’s first non-Californian recruit arrived in Carlsbad in early ’85, signing on for his first season as an amateur in the coveted AFA Masters series. And DMC wasted no time in demonstrating to the locals that there was a world outside of California, making an immediate impact in his debut season before stepping up to the pro ranks in early ’86. A series of AFA titles on ramps, in the fast evolving flatland class and in the “overall”, capped an era of domination for the innovative all rounder. There is no question that his countless appearances and victories at the 2hip King of Vert, Meet The Street, Hoffman Bicycle Stunt Series, Dew Tour and X Games, through the late 80’s and up to the present day, were born from a unique level of talent and true character. Dennis McCoy simply embodies everything positive about a sport that he has dedicated his life too." 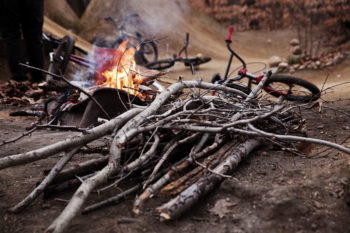 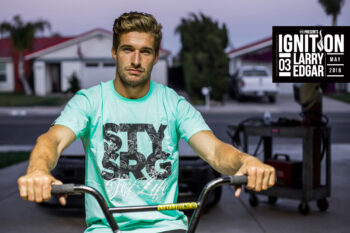 “I don’t try to have style; I just pedal fast and try to go as high as I can.”