Words and photos by Keith Terra

The spring season is upon us here in the North East of the States, and what that means is that its the start of the trails season. Or can we even call it a start? It more just seems like a continuation of it. Usually in this area during the winter months it’s rare that you will find yourself in the woods with a bike or shovel in hand, but as the years tick on, this is not so much of a rarity anymore.

This past winter is probably one of the mildest winters i can ever remember.  Sometimes we’ll get a winter with not much snow but it’ll still be bitter cold.  As far as this winter goes, we barely had neither.  We received one snow storm that wasn’t even that bad and maybe 3 days that you would walk outside and go “fuck, it’s cold out”.  With these mild temperatures it kept the trails enthusiast buried deep in the woods slinging mud all winter long instead of being stuck at home buried deep in snow. Well, at least it was here on the Island.

Same jump, same angle, might as well print it as one print. Rob Blacharski on the top lays out a classic switch whip on this hip. Bottom is city boy Jon Lynn streching the hell out of this nac-nac. Almost looks like he’s foot planting the tree.

In the years past i can recall that if you would be able to ride past halloween a bit into November, you would consider yourself very lucky.  Then as those years continued the season would be able to stretch a few weeks more. Now you can find yourself hitting some jumps in mid December. That all sounds awesome, but as of late the start of the season seems to be a bit delayed. Coming from a trails riders perspective, it seems that the season are definitely shifting in some sorts. Like i said earlier with this mild winter it kept those blue grooves ripping well up until Christmas time. I shot a few photos down at Keyko trails on Long Island around this time of mid-December. In the woods, riding jumps, in the winter in shorts and T’s…yea, i would definitely say the planet is broken.

Cult Crew’s Russ Barrone squeezing every amount of daylight out of this session. A dusk dark side on this booter down at Keyko trails.

Pauly was so stoked that i was shooting film this day... but i think he was more stoked on getting in some hot laps with the bros before the shit hits the fan.

"With these mild temperatures it kept the trails enthusiast buried deep in the woods slinging mud all winter long instead of being stuck at home buried deep in snow. Well, at least it was here on the Island."

Forty year old John Skavarla is a true Long Island trails legend and I’ve shot many photos throughout the years of him doing one footed tables, but it seems like the older he gets, the better he snaps them.

The color photos just look a little strange to me. Seeing the dead colors of the sky and landscape that is a clear sign of bitter cold weather, but seeing someone wearing warmer weather clothing. I’m sure Shawn Real doesn’t care about any of this, he just cares about ripping as long as possible

Wearing shorts in the winter in an area that doesn’t have any palm trees is a rarity. Jay Emmerich takes full advantage of this weather while floating a t-bog. 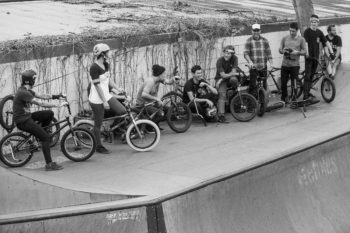 14 Years of the Temple Of Roast comes to an end... 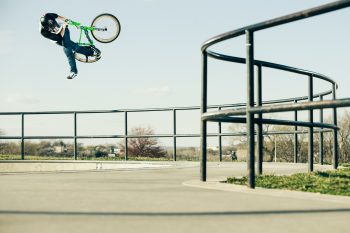 Dennis McCoy - "I'm still riding for both brands that supported me as a teenager, the year I'll be turning 50."

Haro's first Non-Californian eighties recruit talks about the re-ssue of bike he turned pro on and a whole lot more...