Watching Flybikes rider Ruben Rodriguez (or Rubio as he's better known) hit his local spots on the Canary islands is a sight to behold. His recent Islas video gave outsiders a glimpse into the island's wild spots and effortless style he rides them with, but now we've got some more insight into island life, filming with Rich Forne, and more...

How is island life? How long have you lived in Tenerife? Will you live there forever?

Island life is good, if you want to earn a good salary it may not be the best place in Europe to live but otherwise it's worth it. I was born here 36 years ago, and I have lived here almost all my life. As a child I lived in Barcelona for a while and when I was 25 I moved back to Barcelona for about 3 years. Forever… you never know, for now I'm fine here.

Do you get bored of the same spots? Which Canary Island has the best spots?

I like to go back to the same spots after a while and see them in a different way, what I get bored of is riding the same shitty skateparks for so many years - I'm a frustrated transition rider! Of the eight islands, the best spots are in the most populated ones, like Tenerife and Gran Canaria, but you can find some gems all over.

Snaked... and this time it wasn't a scooter kid. Photo by Noe Lamas.

Rubio isn't all speed, he's got the tech knowhow as well. Photo by Noe Lamas.

"What I get bored of is riding the same shitty skateparks for so many years - I'm a frustrated transition rider!"

How long did it take to film the Islas video?

We made five trips lasting a week each throughout one year. Tenerife and Mallorca with Rich and I, Barcelona and Bilbao with Sergio and Noe and Malaga with all the dudes.

How was your experience filming with Rich Forne? You have similar riding styles - do you think that helped?

It was good, Rich is not only one of the best artists on the bike and behind the camera, he also prepares healthy breakfasts and dinners at the airbnb for everyone and shares funny anecdotes and wine. We have more or less the same eye for spots and that helps a lot but if I had listened to him and rode the spots he suggested to me, I would be dead hahah!

It wouldn't be Flybikes without a Ruben wallride, this time it's a different Ruben.

Did you get to witness Rich riding?

Just carving some bowl. I would have loved a clip of him in the video but he doesn't want to hurt himself riding while he has to work.

What was the most difficult clip to film in Islas?

Surely the one I tried the most was the double slide to touch the wall to manual bars, I really wanted to do a tailwhip but I always had very little speed after the wall and it was so hot that day.

Rubio putting his mark(s) on "that spot" in Malaga. Photo by Ismael Ibañez.

"I went to the doctor and my collarbone was dislocated."

You hit your head really hard on the tire slide. How long was the recovery? Will you try it again?

I was lucky, when I get up from the ground I just need to get some stitches in my eyebrow, the medical center is in the spot, I could see it from where I was and I only thought about trying it again when they finished stitching me up. When I left I tried to ride but everything hurt. That was on the second day of the trip and I couldn't ride anymore, when I got back home I went to the doctor and my collarbone was dislocated, they put it in place and in a couple of weeks the shoulder was fine. The finger thing was worse, it still hurts...

Well, if one day I return to that city, I might try it, but without skidding the wheel so much and with a helmet!

The one that got away... Photo by Noe Lamas. 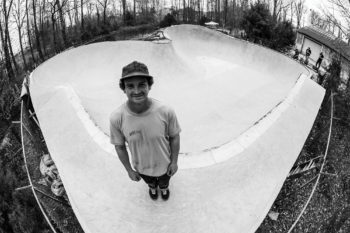 An integral element in the BMX bloodline. 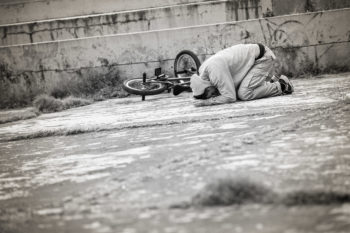 The rain in Spain falls mostly on Madrid