Being offered to travel the world on someone else's money has to be one of the greatest gifts in the world but if it's with someone who doesn't exactly tune into your wavelength then it's not always all it's cut out to be. Dan Lacey is a seasoned traveller and also a strong believer in surrounding himself with a crew of people who bounce off each other positively. While Dan was in Chicago for The Street Series and a DUB team trip we sat down and chatted about the importance of loyal friends when you're halfway around the globe.

Dan lacing that up rail hanger 180 in BK's old neighborhood, amid throngs of Ukrainian kids running wild around this school. Photo - Dolecki

How many different groups of riders would you say that you traveled with during 2015?

2015 was a weird one for me, i didn't travel as much as i did the year before when i was filming for Above Below, we were away with such varied groups of riders. In 2015 i got to go to Chicago without the Dub crew and I hadn't been able to go on a proper DUB trip since the DVD so that was pretty sweet. So yeah there was three distinct groups in 2015 - DUB crew in Chicago, the Above Below crew went on a few trips at the start of the year,  and then the rest of the time i was posted up with Chase Hawk in Austin.

How is it traveling with the DUB crew?

It's a lot more productive than you'd think it would be! Honestly, it's crazy, obviously a lot of people would be quick to assume that everything is a chilled as you'd imagine it is, and it is for the most part but then the boys know how to get down and it's a good vibe, everyone feeds off each other really well and i feel like the relaxed vibe of it really plays a big part of in the moral of the trip. Know ones ever stressing about shit, no ones pissed off. Every aspect of that crews makes those trips so enjoyable.

If there aren't any laughs then you're doing a trip wrong. Lacey and co in Tennessee. Photo - Murray

The Chicago apartment wasn't that bad - i've got pretty bad OCD with that shit to be honest. I'm usually cracking the whip...

After spending so much time traveling with the same riders while filming for “Above/ Below”. would you say you know them better than some family members?

Yeah, i mean i'm real tight with my family anyway but i've grown a real… as corny as it sounds, a real brotherhood with a lot of people that i've travelled with over that time. I hadn't travelled with Nathan Williams much before - i'd been on a couple of trips with him years ago back in 2007 or something but then after that there weren't really any points where our paths crossed that much on trips. We'd see each other here and there but we'd never actually purposefully been on a trip together so I got to know him really well over the past few years. The same with Dak as well, people i'd never would have imagined having that kind of connection with. When you spend that much time with someone you really build a great connection - i think it's sick to have that in BMX.

The day BMX took over the streets worldwide - More Info

Sampling some Israeli beer beside a road somewhere in the desert. Photo - Murray

Nah… nah. If anyone said to me, "Yo you're going on a trip with this dude" and i wasn't into them then i'd just be like "Nah you're alright i ain't going." Give them the opportunity it's cool but for me i don't want to go on a trip where the vibe is weird. I've never had that with any of the guys i hang out with - i feel blessed that all the guys i get to travel with are cool as fuck. There are a bunch of people that if someone told me i had to go away with them i'd say, "Fuck you".

How was exploring Chiraq  for a week, both with dudes you’ve known for a while, Germans, and locals like Kachinsky?

It was fucking crazy - all the locals like Kachnisky, Trent, Brady and all those guys really hooked it up, showed us around, showed us spots and really made the trip what it was. I really appreciate that. Getting to explore Chicago was amazing because i'd never been there when it hadn't been the thick of winter, and everyone knows how harsh their winters are!We got crazy sunshine - it was a treat to get shown around by the mayor himself Brian Kachinsky. I couldn't have asked for a better trip really.

When the ideas in your head don't translate to your body and bike; Dan feeling the frustration... Photo - Dolecki

... but with a crew of friends like this by his side for the duration of Lacey's Chicago stay, the "no cigar" moves were a little easier to digest. Photo - Dolecki

This barspin was shot in the morning in Jerusalem, Israel hours before Dan rolled up on the huge kinked rail that dislocated his ankle badly. Luckily when you wreck yourself in a foreign country you have your dudes there to get you home safe. Photo - Murray

How messy was the apartment you and the DUB crew stayed at in Chicago after a week in?

It wasn't that bad - i've got pretty bad OCD with that shit to be honest. I'm usually cracking the whip quite bad. It's the same if i go on a trip with Rich Forne - he's quite quick to throw his shit everywhere at is pissing me off so much. I feel like being on of the "senior" DUB members on that trip i was able to boss about to young guns a bit and get Carlo (Hoffmann) and (Joe) Jarvis do all the cleaning up. It was kind of easy haha.

Who’s the messiest person you’ve ever traveled with? Rich Forne?
Yeah probably, but he's not the most messy but he's the most annoying with his mess. It's just what he does with his mess and what it is. Sometimes it's ridiculous haha.

Who's the most neat and tidy?

Dak maybe? I only shared a room with Dak once and that was quite funny haha. The way i am when i get on trip i empty all my stuff out my bag and put it away in the drawers like i live there. Everyone else around me with all their shit everywhere… i can't even deal with it!

Who's this guy? Dan and Bruno in the Nashville heat. Photo - Murray

Some of the perks of having friends worldwide is access to local knowledge. Nathan Williams hooked it up real good with this lake spot. Photo - Murray

Joe Jarvis complied quite a collection of moves during his week in Chicago last summer; his "Graft 2" section is testament to that. And Lacey was cheering him on during every clip. This mile-long double to hard 3 wound up being Joe's ender; watch it in motion below. Photo - Dolecki

Clean ice to bar to end another beautiful day in Chiraq. Lacey and the boys put a hurtin' on this spot in the span of less than a few hours. Photo - Dolecki

There are a bunch of people that if someone told me i had to go away with them i'd say, "Fuck you". 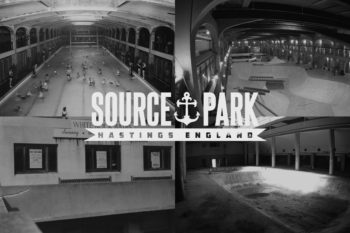 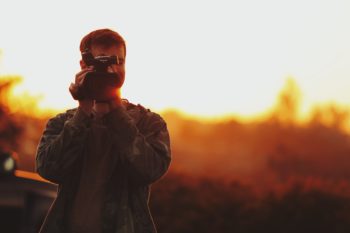 Two Years In The Life Of A Full-Length Filmer