Hopping over much more than the language barrier...

Interview and photos by Wes McGrath

Earlier this year while I was in Barcelona, I had the chance to meet and get to know some amazing people. Some old familiar faces and some brand new personalities that I'd never planned on meeting. One person that stuck out to me in particular was the style master from France, Nico Badet. Naturally, Nico is friends with Joris Coloumb and Anthony Perrin (whom I was staying with while in BCN) so I was able to ride with Nico quite often. It didn't take long for me to notice his unique style and approach to not only bike riding but to life itself. We began sharing ideas of his first trip to America, over coffee and a spliff he told me that he would start his trip with the Vans BMX Street Invitational and then onto a month long journey in Southern California. I didn't hesitate to invite Nico to stay at my place down in Long Beach so he could catch some classic summertime in the LBC.

Nico has no tolerance for rude people, but in light of being yelled at he keeps his cool and we finish the session on our own time!

People always give us a hard time at this spot, Nico wasn't affected by this women trying to give us the boot!

Long Beach has so many spots that have been touched by so many riders over the years. Nico adds his own style like no one else can...

What's up Nico? You've been traveling a lot these past few months and now you're back in Europe. Can you let us know what you're up to right now?

Right now I’m on my way from the west part of south France for the wonderful yearly gathering called, TRIP APACHE. This is when 50 bike riders and skaters come together and are simply smiling all day long! No hotel just gipsy vibes around the Basque Country in Spain during one week. It’s simple. It’s life! I’m stoked for sure, it’s our pilgrimage.

Who are your current sponsors and how long have you been riding for each of them?

Another Day - Nico Badet In California

What have you been busy with lately, any new projects on the horizon?

Yeah I just spent an amazing month in SoCal, and I met so many great new friends. It was my first time visiting the USA so it's easy to say I had a BLAST. I have so many new projects going on, one with the French FIT distributor and THE FRENCH CONNEXION in Paris. I'm also working on my new part for the MArieJADE DVD called, Nofutur. Lastly I'll be working on a new Shadow part too.

Tell us a little about your life back in France.

My life back in France is about riding and visiting my friends, easy living... I’m about to buy a car so I can venture out a bit more. I’ll need to make some money to enjoy my summer like a prince! hehe.

Where and what do you usually ride? Who do you go riding with on a daily basis?

I love riding with everyone, everywhere so the good times never stop. I mean, I really enjoy street riding but a good bowl or a California pool is amazing! The list of my mates is too long and I’m glad about that. The BMX community is such a big family I can’t quote everyone and that’s what is so cool about this industry.

How many months out of the year are you traveling?

BMX is so large I am lucky enough to enjoy visiting my buddies all over the world, pretty much anytime... The freedom of travel within BMX is priceless and I won't ever stop enjoying that notion.

How long have you been riding peg-less?

Sunsets in Long Beach at this particular spot are shinning gold down the street like nothing I've ever seen. To add to the goodness I haven't seen a wallride pedal slide like this before either!

Nico heads down the stairs for his last session of the trip and it's safe to say he had a great stay at the 666 house in Long Beach!

"So evidently, one year later everybody was riding four pegs, so I took mine off... it’s important for me to do things differently."

Summertime in the LBC is something you have to experience for yourself...

What was the main influence behind you embracing a pegless style?

The fun! Because less is more, you know?

Did your peg-less riding come directly from street riding or did it evolve from skatepark riding?

How much time did you spend in California and did you feel like it was enough time?

I spent one month in California and it was enough to get the feeling of how damn cool Cali can be but not enough to ride everything I've seen in videos and out of the car window! I must come back.

Which cities in California did you get to visit?

Landing in California, you started your trip with the Vans BMX Street Invitational in Huntington Beach, riding alongside some of SoCal's best. How was that for your first introduction to America?

Hell yeah that contest was easy to be a part of and all the dudes were so cool and chill about riding in a contest like that... I was able to catch the “DOOR STEP” premier in Long Beach, which was the best introduction to the core of BMX in SoCal.

One of the first days we went out to uncover some LBC goodness, Nico came across this bank to rail and right away applied his pegless style!

Nico holds such a unique style that you never really know what he is thinking, even at the most local spots.

Innovation is key and Nico is no stranger to utilizing the spot and his options to make it all possible. Wedging his water bottle just right to make his move possible.

What were you up to while you spent time in Long beach?

Visiting this perfect city with these incredible spots! The size of the city was perfect for me - just pedaling downtown was best. I hate to waste my time in the traffic.

Describe your typical day in the LBC?

I started the day with a delicious peanut butter Açai and then shared a coffee with all the locals.

I was stretching in front of the ocean during the free yoga lesson and then enjoying my favorite and massive burrito at Eddie’s. After that, I was going to ride and ended up drinking a well deserved fresh corona at the “good bar” close to the Six. Thanks again to my mates for showing me all these perfect spots.

Who did you get the chance to ride with while you explored Southern California?

I had the chance to stay at Wes' house and we hit the road to get some crazy pictures and I rode with my FITBIKE team mates and also some European VANS homies. I felt like a local boy showing them the city and the cherry on top was I got to know and become friends with the good guy in black and BMX, the legendary Rick Thorne.

Did you get the chance to ride anything unique, that you don't usually ride in France?

Passengers in life are constant so make sure they're great company just like Nico!

I couldn't believe that Nico hasn't ever ridden an empty pool before coming to California. So we had a nice long session! We even caught a glimpse of Rick Thorne in the wild of Hollywood!

There's nothing that screams SoCal like a good pool session! Nico blasting the deep end out in the Hollywood Hills.

"Riding an empty pool made me feel like the Prince of Dogtown, even if I didn't visit Venice."

Even with an opposite approach, Nico laces this pedal crook past all the sketchy-ness at the bottom of the rail.

What did it feel like to ride your very first pool?

Like I said I love to ride everything and empty pools are the most iconic spots in Cali! That made me feel like the Prince of Dogtown, even if I didn’t check Venice. I can die happy, I rode an empty pool.

Can you explain how you've become friends with Rick Thorne? Has he been an inspiration for your love of pool searching and riding?!

I first met Rick when we were riding that Hollywood Hills pool, he's super funny and an awesome person to be around and ride with, such a real dude! You can feel his experience in our little community of BMX. I have so much respect for people who help drive BMX with a focus on fun and respect! So yes, he has been an inspiration to me, I am younger than him and looking up to older riders with respect is what it takes to have a solid new generation of riders... It's all about motivation and congratulations in between all the good times.

Thanks to Andy Zeiss (Vans Europe) for sending me over the ocean! Jerry Badders for the perfect visit at the massive VANS HQ. Chris Moeller ( FITBIKE / S&M) and Dylan for welcoming me at the Building and for showing me what 'Made in USA' means! Ian Morris (Four Down Distribution / The French Connexion ) For driving me to the famous 605 ditch and for my first ever empty pool session. Tony Malouf for being a perfect TM (FITBIKE) Wes McGrath for your beautiful pictures and for the amazing hospitality.

THANKS BMX - THANKS EVERYBODY.

Sunken City out in San Pedro was a staple spot for Nico to visit. We had a running joke all month about how badly Nico wanted to ride and enjoy Sunken City!

This spot showed to me the drive that Nico has for his riding. This big 180 wasn't easy to deal with all the loose dirt and broken glass everywhere!

Nico has so much to offer BMX with his attitude and his style on his bike. Supported by Vans, Nico is able to keep his flow moving without a hitch! 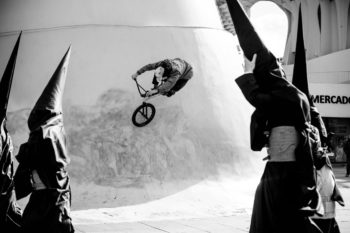 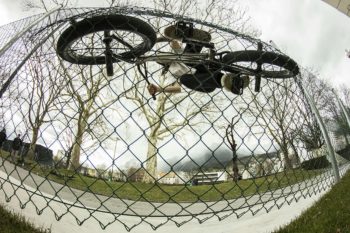 "​BMX is my escape from reality"