My first trip to Richmond was in the winter of 1995. Cold, of course, I remember that first and foremost. But what made a lasting first impression was the corridor of red brick buildings that sat on each side of I-95, as if you were driving through an urban canyon -- I-95, the river cutting through the cityscape.

To someone born and raised in Florida, a state built from wood and cinder blocks, red brick anything was a novelty.

A connection with distant history to some? Maybe even for me as well (initially), but what they quickly became synonymous with, was a certain DiY ethic that has remained embedded in Richmond since my initiation into its city limits.

All surrounded by a socio-politically aware punk scene, an inclusive community (very much including the BMX and skate scene) that easily drew an 18 year old Floridian into its orbit.

It is an ethos.

And that ethos, 26 years later, is still very much mixed in with the aesthetic of those ancient bricks.

A half an hour after this photo was shot, this ditch and a portion of DT Richmond suffered a torrential downpour and a flash flood.

Matt Coplon, Taking a break from behind the camera.

I'd met the Leeper Brothers well over a decade ago. In true punk form, we corresponded for years before we actually met. And on the first meeting, it turned into an instant connection, with their doors wide open with hospitality.

The ties that bind that red brick ethos.

This was the first of dozens of trips to come, to the point where that old brick city feels like a second home.

Geographically, Richmond exists as a hub, as we have set out from there on multiple road trips up and down the East Coast.

And it thrives, perpetually; Richmond playing host to events, dozens of such, organized by Steve Crandall, as ground zero for Powers' Bike shop, the setting for RadShare and Drop In Coffee.

It made sense that this old city would become the fourth locale for Profile's Neighborhood Crawl.

In actuality, it probably should have been the first...

"To someone born and raised in Florida, a state built from wood and cinder blocks, red brick anything was a novelty. "

As with the previous cities selected, we choose a rider's house as a home base, and on most days, pedal from there to ride the local spots.

Thanks to Shane Leeper and Sara Parker for being our hosts.

To Steve Crandall for his help in between days.

To Chad Powers for a dialed afternoon at the shop.

To Latane Coghill for help with filming and for being a solid human.

This is Profile's Neighborhood Crawl, Richmond.

Photos by the crew.

The whole crew, and nothing but the crew.

About that intro photo...

This rail was right down the road from Shane and Sara's house. A terrible downhill run up. Looked over for years...then Dan Conway got a hankering. 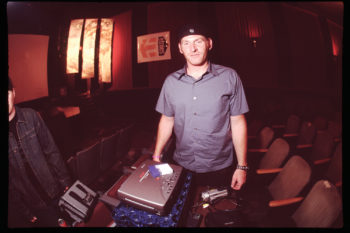