The Good Times Are Killing Us - A TMPRD Berlin Photo Journal

"We were going to Germany baby."

With our dude Raph stationed in Berlin, there was also a hope that we might one day get our shit together and make a trip of it. Fuelled by the fervour and reckless attitude of D Street, dates were set, flights were booked and a room sorted. We were going to Germany baby.

It is a satisfying feeling being able to organise 10 dudes from Australia to travel to the literal other side of the world to ride bikes. Long ass flight anxiety aside, the excitement was high and last minute tips heralded. We boarded the flight, lives in the hands of a machine and set off for glory.

TMPRD - THE GOOD TIMES ARE KILLING US

"The whole Berlin experience was something completely new to me. It was to be my first time overseas and definitely the closest thing I have experienced to the big team trips I had imagined going on as a kid. The weeks leading into it I was pretty apprehensive and almost dreading it. But man I am glad I didn't let the doubt psyche me out, and it seriously blew my expectations out of the water.

Where we stayed could not have been better, having the bar downstairs was the perfect spot to get out of the apartment whilst everyone was getting ready or just getting back from the day, and you could always guarantee someone would be down there. We were putting in some serious hours and miles on the bike so most days consisted of getting back at around 10pm so usually me and whoever else would have a beer or two at the bar whilst the others showered, and as the others would come down we would tag in. worked awesome." - Wilton Hedley

"The weeks leading into it I was pretty apprehensive and almost dreading it. But man I am glad I didn't let the doubt psyche me out, and it seriously blew my expectations out of the water."

"Berlin was better than expected for me! Had the ultimate tour guide (Raph) just taking us to every riding/drinking and hang out spot he had stored away in his memory bank, and everything else along the way.

The place seemed to be riddled with spots in every nook and cranny and the joy of being able to buy cheap beers at every corner store is always a treat haha." - Jake Corless

"Berlin was an unreal time. Was awesome to get a solid crew together and kick it with Raph - had been a year or two since we had last seen him seeing as he is living in Berlin for a little while. He killed it being a tour guide - had mix of everything. In terms of what went down, I’m sure most people would understand - BMX, beers, good friends and awesome scenery.

A highlight for me was definitely catching up with some of our German friends some of us met a couple years back in Barca, also meeting some rad new homies. Was stoked to catch up with our homie Clint Styles! Epic times. Stoked we didn’t even cop an AIR BNB fine. Definitely should have haha. Rock on legends - Support the realest." - Dylan Steinhardt

"Stoked we didn’t even cop an AIR BNB fine. Definitely should have haha."

"TMPRD Berlin was one for the books, toey levels definitely hit 10 out of 10 toes in this one. Despite riding the best spots Berlin has to offer, the stars really aligned for us in terms of weather, accommodation and having a spot-guide to show us around.

Favourite memory was this little kebab shop that opened up the day we arrived right underneath our apartment. They gave out 99 cent kebabs all week and everyone went full ham kebab overdose on them. It went so far that we all decided to get a kebab tatt to remember the trip." - Marius Dietsche

"Favourite memory was this little kebab shop that opened up the day we arrived right underneath our apartment. They gave out 99 cent kebabs all week and everyone went full ham kebab overdose on them. It went so far that we all decided to get a kebab tatt to remember the trip."

"The seed had been planted for a Berlin trip ever since Raph left Australia to live there a few years ago, but with planning and organisation not being strong points in our circle, whether or not we could round everyone up was questionable..

Fast forward to August 2019 and we found ourselves (most of the crew and a few welcome blow ins) spending the better part of two weeks there riding bikes, drinking beers and taking full advantage of the local attractions.

It's a city I was happy to go back to having spent some time there in 2014 and 2015 (both times during the summer mind you). Being such a conglomerate of convenience, with so much history and expression on every corner, I knew it would be the perfect place for a bunch of dudes on bikes with no place to be!

I had a good wake up call the day of the jam we held at Mellow park though, I somehow fucked up and bailed out on the trails and ended up loosing my memory of that whole afternoon and spending the rest of the trip in pain.. so that was a bit of a low point, but the part of the jam i remember was sick and the few last days venturing out, I can't think of a better place to be chilling out, drinking beers watching my mates ride. It was awesome to see Raph, Fabian and Jonas, and our Chinese friends Tim and Muz again, plus just to get away with a motley bunch of Aussies. the trip as a whole was a great success!" - Jerard Vandervalk

"Coming from the car dominated landscape of Australia, Berlin was not quite a culture shock, but more a reminder of how great it is to be able to ride your bike everywhere. Both a personal preference, environmentally responsible and the perfect way to optimise finding spots – you know, the strange ones behind the loading dock down that laneway which would go unfortunately begging should a car be involved. No car for 2 weeks, treated!

And treated we were, I remember one fine day emerging from the density of inner metropolitan suburbia, stumbling upon one of the most beautiful scenes I have seen. Picture the castle of a 16th century Mediterranean royal, elegant foundations draped with green opening out onto a symmetrically striking park brimming with vibrancy and life of all varieties. Except this was a public park not more than 5 kilometres from the city. I will never forget that day, cheers Berlin." - Mike Vockenson

"I think it originally started with Dylan and Mike, talking about doing a Berlin trip. I get an email one day that they booked tickets. Fuck its going down! Im glad it happen when it did because I knew my way around by now and my spot map was growing. The closer it got i was getting a bit worried that they might not like the spots, but seeing how excited they got at every spot put me at ease plus the fact that you never more then 50 m from the next Spдti (late night shop) for beers, keep every one happy.

It was a full on two weeks, Vocko and Denby got broke off in the first 3 days, plus there was a few of us that were already injured before the trip even started but i’m still amazed that we got so much stuff in the end. We also got real lucky apart from that, weather was amazing, I think it only rained once. We also got to experience a mini Love Parade after street riding all day that was an eye opener, Techno party snaking though the streets of Berlin, thousands of people partying and drinking all over the place. Wild.

But it all had to come to end with another big night of cold one’s, stories and getting a little trip Tattoo that the local rider (Jonas Bader) hooked up. Thanks again everyone for coming, hell of a time and can't wait for the next trip!" - Raph Jeroma-Williams

"We also got to experience a mini Love Parade after street riding all day that was an eye opener, Techno party snaking though the streets of Berlin, thousands of people partying and drinking all over the place. Wild." 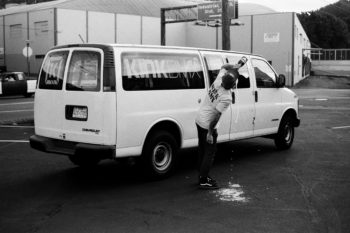 Two years, and lots of blood, sweat and tears... 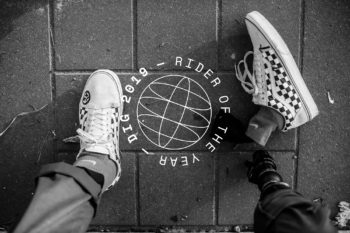 Pascal Lafontaine - OUR DIG 2019 RIDER OF THE YEAR

"I Thought I'd Never Ride Again"