Lord Of The Rings Ain't Got Nothin' On This

New Zealand has always been a place i've wanted to visit since i can remember. Myself (Lima), Matt Priest and Andrew 'Inch" Thomson, tried to go last year, but Priest ankle injury was still playing up, so NZ was put on hold for another year. The plan, is there ever a plan?

Priest and Inch had worked out how much a car and petrol plus ferry crossing would cost, The Source said they would help us with that. Shout out to them for that. To be fair to Inch and Priest they did a pretty good calculation. We had talked about camping the whole time, and with perfect scenery everywhere, plus being summer it seemed like a pretty good idea. So we bought tents with us and Craig Stevens gave us some camping chairs, so we were set, that's pretty much all you need for 5 weeks on the road. Camping in NZ is really easy, you can pretty much camp wherever, within reason.

So the trip had started with myself (Lima), Matt Priest and Andrew Inch Thomson, we were there from start to finish. Up in Auckland Craig Stevens helped us out a bunch, but there was a good crew of people who we had already met or knew of which we hanged out with. Its cool meeting some many people along the way. Down in Queenstown we were meeting a bunch of people, it was our holiday within a holiday. Jonny Devine now lives there and let us camp in his garden whilst about 6 or 8 other English lived in his house. Cheers Jonny. Martyn Tambling our Verde UK TM arrived in Queenstown, he went out with a few guys ( Neil, Pope and Toby ) from his way and it just happened we were gonna be there at the same time. Life is perfect sometimes right. Poll and John Scott flew into Queenstown and were gonna join us with the trip back up to Auckland. I broke my elbow and wrist whilst in Queenstown, this became a slight inconvenience. Whilst being in a 90º cast up to my shoulder, someone would cut up my eggs in the morning, whilst someone else would help put my sleeping bag away. A good crew is a must when living on the road for so long. Just after this photo was taken, John and Inch wanted to take a long exposure shot with the stars. They put torches in there tents so they would also be lit up, they also forgot to close the zip on the tents. Little did they know that they would be sharing there tents with all the mosquitos in NZ that night.

Another amazing bowl, with amazing scenery. Its really hard to explain NZ to people who haven't been. My best way to explain the scenery was ' you know when you drive 3 hours in England? its rubbish right. Well you happily drive it in NZ, because everything you see is amazing ' Thats actually playing it down really or very poor effort on my part. But completely true. We didn't actually ride this bowl for that long. Jonny Devine told us about a hike up to a glacier a short 15 minute drive away.... Priesty ankle wasn't really up for the hike so stayed and rode the bowl, by this point Poll (my old housemate) and John Scott (priest old housemate) had flown in. John is a really good photographer, who had recently won an online competition for a photo he took the year before of the Wanaka tree which is in the lake in background of this photo. Considering he doesn't take BMX photos, he has a good eye and great timing.

Apparently there's roughly 30 skateparks in the Auckland area. The ones with cradles always get a visit, because who doesn't like ripping round them for a while. This photo was only shot because me and inch wanted to do shot a slomo #tabletoptuesday on my iphone.

"I had a pull out map, so Craig, with help from George Bolter, drew down every spot they knew of onto the map."

Our rough plan was to start in Auckland and drive down to Queenstown, then back up again. When it came to spots to ride, my research was pretty low. I had just looked at all the scenery stuff I wanted to visit. But I had a pull out map, so Craig, with help from George Bolter, drew down every spot they knew of onto the map. That was really handy as it gave us a rough route of sort, to make on the way down, then do the opposite on the way back up. Martyn Tambling our Verde TM in the UK was heading to Queenstown, and Jonny Devine was living there, so when he arrived seemed like a good time for us to arrive. Considering we didn't plan these trips together it all worked out surprisingly well. We almost (minus MJ) had the full UK team together over the other side of the world. With the added characters like Neil Pengilley and Dean Mayo our little holiday within the holiday was awesome.

This is the second trip i've been on with Inch, the first being Malaga the year before. We actually wanted to do this trip then, but injuries kinda held that one up. I thought I knew what to expect. I remember thinking 'hes just like a young Priesty, before he went on a bunch of trips', which is pretty true, but probably worse. Once in Queenstown Inch went in, losing his passport and wallet and getting thrown out of most bars in the first night. But he would still manage to ride or skate amazing the next day, even after waking up in his tent, hungover, fully clothed with his face swollen up from the summer heat. I enjoyed the look everyday.

This is the place I 100% percent wanted to visit whilst in NZ, Will Blount was also really keen, he was over with Corey Walsh, so we grabbed a big crew and headed out there from Queenstown. Milford Sound is one of the wettest places on Earth, but somehow we managed to get perfect blue skies. I honestly haven't seen anything like it, but before you actually get to Milford Sound, you go through this huge tunnel through the cliff face. This brings you to what I can only describe as something out of Jurassic Park or Avatar. It also happened to be about a 20 minute hillbomb. I feel like we might of stopped about 30 times during the 5 weeks to bomb hills. But this one might well of been the best. Will and Corey were the only two with bikes, so it was up to them. This was the only time during our stay Inch and Corey didn't actually do something together.

"This time the journey back would be with a 90º cast on my right arm from having too much fun at the trails."

I can see how people get stuck in the Queenstown bubble, the place really does live up to the hype. But after a week of staying there, I couldn't wait to get back on the road with our crew to explore more of this amazing place. Only this time the journey back would be with a 90º cast on my right arm from having too much fun at the trails. I do enjoy the ease of staying in one place and the routine is nice, but the unknown of where you will camp that night or what you will see, especially in a place like NZ is a million times better.

This may of been one of my favourite few days. We had just sailed into the South Island, and were starting our trip to Queenstown. We drove into Reefton, it looked like a town you would see in a wild west film. We then saw the park, it was huge, also completely empty, similar to the town. We cruised the park for a bit, there was an official camping site next to it. We decided to pitch our tents up in between the skatepark and the camp site. The grass we found was like a mattress, its funny how you begin to notice stuff like that whilst camping everyday. The setup was dialled, I washed my socks in a river next to where we camped. You can actually see them drying on the railings in the photo. We could of stayed here for a while, but we said we would be in Queenstown when Martyn and the boys flew in.

So we went to this bowl a couple of hours south of Auckland in a place called Raglan. Dialled setup, lovely scenery but really windy so left. We had heard there was another park not far from Wellington which had the same bowl but better. We trusted George Bolter advise, and he was right! So after a couple of days travelling south, hitting up other spots and scenery we arrived here completely forgetting that this was the place. An another amazing spot, completely empty except one young rider who wanted Inchs autograph and a girl called Ellie who was ripping around the bowl. 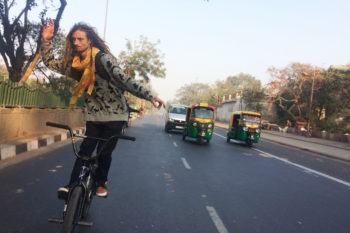 “You need to invest yourself first and be determined to be a part of this big BMX family.” 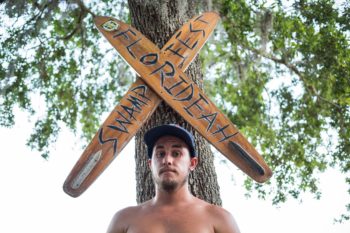 Taking The Reins: Trey Jones On The Florideah Swamp Fest

The story behind that epic no-budget DIY jam...