Three Years of Travels, in Photos

"Léo and I started filming like 3 years ago, we didn’t really know what we’d come up with nor how long it would take as both of us are somewhat busy on the fringe of BMX (he’s a director/ videographer and I am studying civil engineering at uni) so we decided to take things easy and not worry about a deadline or anything. Just wanted something that gets people pumped to ride really, but we ended up wrapping up the video no later than a couple months ago. I assume it just takes time to put something together that we’re both stoked on.

A few destinations were ticked off the list during these years! Started things off with the interrail thing where you get a sort of European pass that allows you to travel across Europe for a certain amount of time which is really cheap for what it actually is (I thoroughly recommend it by the way).

Had a chilled one in Rome and Trieste as the trip had just begun and we didn’t feel like sending it on the first days.

Shortly afterwards we were headed to Budapest but we had a change in Ljubljana, spent the day exploring the city and it’s safe to say that the city has a lot to offer ! Definitely somewhere I’d go back to! Got a few clips in Budapest, no need to introduce the city it’s absolutely amazing !

We were lucky enough to get to Berlin on my birthday so that some piece of shit could rob our bikes during the night... shit happens unfortunately:/ Finished our trip in Amsterdam doing what people do best in this city [lol].

A wee period of time had passed before we really got back into filming, managed to get the most out of Paris when I wasn’t stuck at school doing maths and engineering activities. During this time I remember meeting a stacked crew of English dudes with a bloody strong accent in Paris, they were visiting a friend of theirs who was living in the capital at this time. Got along pretty well and I now consider them as very good mates of mine ( They’re reyt nice as people say in Sheffield ). So we’ve been visiting one another since then, going back and forth to Sheffield ! Let me tell you that we have be stacking clips over the years !

Also got to travel to Greece last summer with the boys, had the most warm welcome in Athens. Met the most easy going peeps and just all round amazing human beings !

Seeing this project finally come to an end is such an unrivaled feeling and I couldn’t have done it without the help of everyone, thanks to everyone who held the camera, Léo for making the magic happen with the whole video thing !

Thank you BMX for the good times" - Robin Bourhis 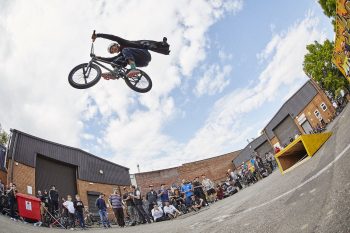 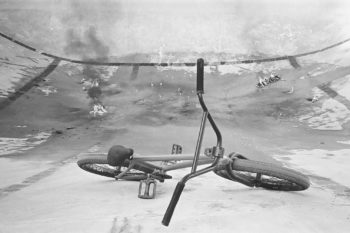 DIY concrete trannies inside a school!