We're always hyped to see footage from Greece's Jason Eustathiou and this time he's been busy in the streets of Turin (or Turino if you have the euro flair), a city nestled up in the north west of Italy. Despite some drastic weather changes, broken wheels and a big slam, Jason managed to lay down a bunch of his signature tech lines. That last clip is butter!

"Back in the end of July we visited the city of Torino in Italy along with Jason Eustathiou for bmxday jam...we thought it would be a good idea to extend the trip for a few days in search of some fresh spots. With the help of the local riders we pedaled (a lot) to some really good locations around the city, not everything came out as we planned due to some incoveniences such as weather changes (from super hot to uber rain) ,bike problems such as broken wheels and chains and non the less a big crash of Jason...of course that didn't stop him from filming his technical lines,although he was a bit dissapointed that he couldn't charge a couple of big moves on some really sweet rails that he had left for our last 2 days there...but in the end like in every trip, you get to see new places ,ride new spots, meet a bunch of interesting people and nothing else matters!" - Ronny Skevis 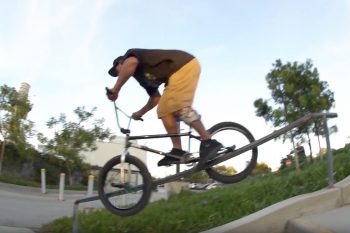 A family with two kids... Jourdan is definitely still producing

Flat out for a day in Hamburg - Greg Illingworth