Park riders doing what they do best

Moving onto Mongoose Jam Park, really cool ramp setup at Rush, basically anything done into or out of the salad bowl was rad, as well as the bail section half way through the video were super radical. The real eye catcher was Peraza's 360 whip to table top was real sick.

"It was a great few days at Rush Skatepark in Stroud, England. Mongoose saved the best for last rounding out the first Mongoose Jam UK with a Park comp. The course layout allowed the field of athletes to put together tons of unique lines. The box jump, quarter and back wall let riders boost huge airs while the technical middle section with a 5 foot deep bowl let athletes link together technical lines and combos.

During Park, the ams went all out in Park. Kaine Mitchell (Team Ryan) threw flair tuck no-handers on quarters and front flips and 360 bar to bars on the jump box. Dan Allington (Team Isted) pulled a clean double tailwhip on the box jump, while Jack Hobson (Team Casey) linked together floaty superman seat grabs, 360 tuck no-handers and flairs. At the end of the day, it was Ross Domanski (Team Peraza) who took the top amateur spot ranking 6th

While the pros let the spotlight shine on the ams, they definitely let it shine on them too. The crowd went nuts when Gary Spencer (Team Ryan) tried a handplant bar on the wall, but he was a too close and accidently hit his bars on the wall for an assisted bar to bar back. It was clean enough to almost look like he did it on purpose.

Tom Isted (Team Isted) flowed through the park at warp speed and came out of the quarter, over the deck and wall rode the railing of the second floor viewing area, while Team Peraza’s Ross Domanski killed it with a huge superman seat grab over the box, into a 720 on the quarter and a 360 over the bowl. Victor Peraza (Team Peraza) checked all the boxes with a 360 table top to look back over the box and technical combos. He finished his run with a suicide no-hander to fakey on a quarter." -Mongoose

There is also a photo gallery you can scope out HERE 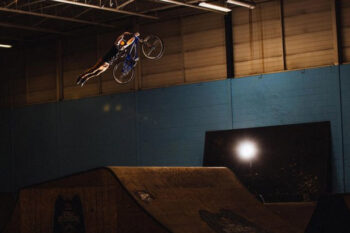 Drew is trying his hand at slopestyle mountain biking 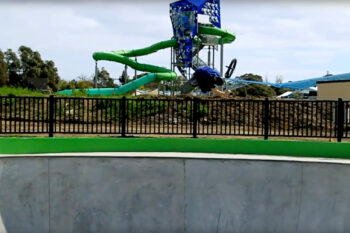