From high school leather hero to college town lysergic weirdo… Albie Bennett's Off the Map 2 part has a book of it's own behind it. In 2005 we would wait for Albie to get out of school to go film clips for OTM2. The Bell would ring and he would come out the door and down the front steps of Brookline High in a leather jacket with a ton of babes all around him. Shaking off girls and then firing out eighteen stair bunny hops all in the same hour. This is all no exaggeration either. For the next couple of years, every holiday season and school break Albie would come back home from going to college in Towson, MD. Only on the vacation get away weekends that Albie was home from school, would him and Matt Busby (Off the Map creator) get together and shoot stuff for the video.

At one point we got far enough into an alley-way that we turned our heads and realized we were now bushes in front of a female college dorm room in which half naked babes were changing from lingerie into their night gowns for the evening. We parked for only a short amount of time. The bushes were not purposely meant to be a peeping-tom device. Although, accidentally becoming a neighborhood pervert is comical to us, I'm pretty sure that is considered being a sex offender. The initial spook of being caught in perverted matters, as opposed to getting caught actually cutting the bushes off of someone else's property became an even more criminal act; very much looked down upon. But… don't mind if I do!

Possibly due to the amount of homeless people living in Boston; we hung out with a lot of bums, and I mean a ton. Albie most certainly seduces the kook magnetism. Freaks and weirdos, female cops, hookers, and strippers all love Albie. It usually is initiated when they stick their hands in his hair. Crazy people love crazy hair. Or crazy people are just drawn to Albie Bennett's acidic cartoon style energy. The main idea here is that you can't really ride Boston without the confrontation of a bum or at least having them near you and breathing the same air as you. When those freaky one's catch a breath of Albie it ends in a lot of loud noises. In the first Off the Map Busby managed to film a heavy amount of these Boston kooks. Casual dads shitting their dockers in the commons and letting it air out. Bums humping newspapers and waving canes.

During this time I think Busby learned a lot about filming these kooks and that they can sometimes get vicious. A majority of the bums that we did film during that era, ended up in the Metal Bikes video Dead Bang and Bone Deth the movie. But I have never been approached by them so much in my life aside from riding Boston with Albie. It has got to be the looseness. Even though it is less common amongst today's average BMXer, Albie is a full on loose cannon. He is the type who might not tell you what bongo stunt he is about to fire out, and if he does.. there is no warning that it is coming this second. He just goes. Brian Yeagle is the same way. They both just ride fast and heavy without warning because thats naturally what sparks fun at that moment; spontaneous combustion. There has been a number of times that I see people confused by this. I definitely witnessed Navaz get stressed because Albie just fired out a gigantic 360 with no warning. Which is a pain for any filmer, but it is more amazing than a clip because it was done with out concern for a review of the past. Perhaps you can call a loose cannon a 'Future Brain'. Never looking to the past, just hauling ass, living for the now and what's to come. 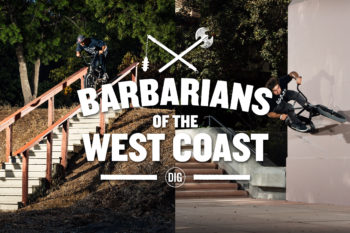 DIG - Barbarians Of The West Coast

Nick Castillo and Cody Bowers on a tear in Santa Barbara 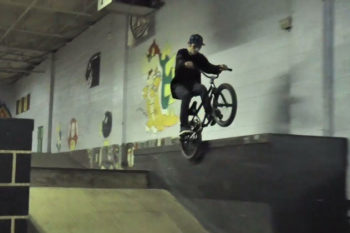 Four fine clips to close out the week