7 Clues That Brian Foster Should Have Known "BF-it" Was Going Down, But Didn’t

"For the month before it was released, a lot people were acting weird." - BF

It’s been a couple of years since BF-IT premiered at Austin’s Texas Toast weekend in 2012 (and now you can watch it online HERE). One thing that the average person outside FIT’s inner circles may not know about the amazing Stew Johnson production is that until the moment it premiered, the documentary was supposed to be a secret from Mr. Foster. And it wasn’t an easy secret to keep. “For as big of a production as it was, and with as many people who knew about it, consciously I didn’t get any inclination about it until a week before,” Brian recalls. “Subconsciously, though, I knew a lot of weird things were happening.” Read on for some random accidental and unintentional hints given in the months leading up to the BF-IT premiere that were oh-so-close to tipping him off to what was in the works, straight from BF himself:

1. Over the years, Glenn Milligan and I had talked about doing a documentary when we were on road trips, but we just didn’t know who would pay for it. Probably six months before "BF-it" came out, Glenn sent me a text, “Are you doing a documentary?” I replied, “No?” In the meantime, someone kind of knew he was asking about it, and sent a text to Glenn saying that I didn’t know about it and to shut up. He replied back to me in about ten minutes, and said, “Oh, never mind.” Since we had talked about it in the past, it wasn’t out of left field, and it didn’t click.

2. I have a box with all my old photos, and when I first started Instagram I went to that box, and just started peeling photos off the top. They were the photos that were used in the documentary, which were just put back on top. To me, they were just the photos on top. I started posting pictures, and everyone at FIT thought I knew about it, since they were the ones in the documentary.

3. When my DIG Legends Issue interview came out, there was a photo of my first trophy and the Nike Pool Best Trick trophy together, and a few from when I was a little kid. (ed. note: the documentary was originally supposed to come out before the Legends Issue was released, but was held up for a few months until after the issue came out.) I was confused on where they came from. It was one of those things where I thought, maybe I gave them to someone or something. Luckily, if I paid attention more I might have known.

The photo in question- Brian's first BMX trophy from 1981, and the Nike Pool Best Trick trophy in 2011. Three decades of BF-awesomeness.

4. For the month before it was released, a lot people were acting weird. My wife and I were in Long Island with Jen’s family, and Timmy (Strelecki, Brian's brother-in-law) was also in Long Island visiting, and just shaded off one day for a few hours while everyone was waiting for him so we could eat dinner. I thought that was kind of rude he just shaded off without saying anything. Everyone was being real cool about it. Everyone but me knew why. He actually was doing an interview with Keith Terra for the video (it ended up not getting used in the documentary). There were a lot of interactions with people that made me think, “That was odd.” It all made sense once the video came out.


5. I’ve been with my wife Jen for 25 years, and I’m pretty in tune with her. I just knew something was up and I didn’t know what it was. It was literally like, maybe she’s sleeping with someone? She finally told me something was going on but she didn’t want to ruin it for me.

6. Going to Austin for Texas Toast (the weekend of the premiere), I knew something was going on. But I didn’t go out of my way to get more information. I honestly didn’t know if it was a five-minute web video, and we were watching it in a bar; I had no idea. I showed up at the airport, and the whole two or three days before the event, at least five or six times someone would come up to me and say, “I heard about this, and I can’t wait to see it.” I’d be like, “Uh, I’m not supposed to know about it.” And they would freak out, and thought they ruined the surprise. I’d then say, “It’s fine, I kind of know what’s going on, but I don’t really know, and I’m not trying to find out.”

7. The entire FIT team is staying at Stew’ house. Stew was holed up in his bedroom finishing up the documentary. They got me a hotel. I’m kind of like, “The whole team is staying at Stew’s house; why don’t I just stay at Stew’s too? Why are we getting a hotel room just for me? I can sleep on the couch; I don’t need my own room.” It was kind of a headache; there was a rental car now, and I’d have to meet people for dinner. But the whole time was like, “You can’t be at Stew’s house.” I actually stopped by one day, and everyone kind of met me in the front yard, because they didn’t want me to go in the house.

The more things change... young BF with some big bars on his whip. Photo courtesy of Brian Foster's box of old photos.

A few other random facts-

- A lot of the old pictures shown in the documentary I had never seen before, like the ones at Cyclecraft, painting the bikes. I was like, “Where the hell did you get this stuff?”

- Same with some of the Super-8 footage when I was a kid. I knew it existed, and probably last saw it on a projector when I was ten. There is one of my grandmother on an XR-70; it was hilarious. What was she doing riding around on a motorcycle? I now have all that on disc.

- When there is a documentary on yourself being produced and know about it, do you want to have a hand in the direction of it? I’m kind of glad that I didn’t. There are so many different ways you can do it. I’m super psyched on how it turned out. We could tell stories all day, and it could be five hours long. It would have been a headache in deciding what to include and what not to include.

BF-IT: The Story of Brian Foster 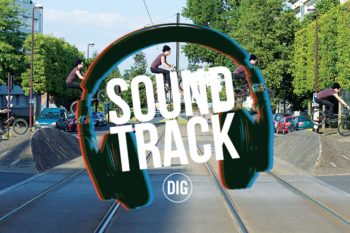 Down and Dirty Death to Disco 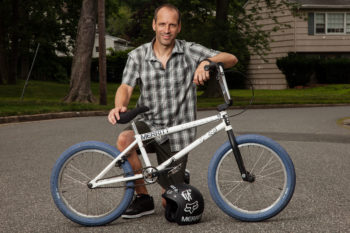