ALEX VALENTINO - My Perspective As A Black BMX Rider

The past few weeks have been tumultuous in all realms of society, to say the least. Just when much of the world was starting to look forward to the easing of restrictions after the last few months of the Covid-19 pandemic and getting back to whatever the new “normal” will be post-‘Rona, viral video footage capturing the horrific death of George Floyd in the U.S. caused by police sparked a firestorm of protests demanding justice and racial equality. This wasn’t just happening in the U.S.; many cities across the globe were the stage for protests by people of all colors and creeds, marching in solidarity.

While racial inequality is by no means a new subject, BMX has for the most part always been perceived as a bubble of sorts from the real world, where creativity, uniqueness, and diversity are always celebrated. One where we all ride together, regardless of political and religious beliefs, class, nationality, or race. BMX has always been the bond that stands above all the labels and divisions the real world can succumb to.

After a few social media posts/ comments by riders expressing their negative experiences due to the color of their skin, they brought to light a discussion that for the most part has been an elephant in the room when it comes to BMX media. We at DIG thought it was as good a time as any to provide a platform to voice their thoughts, experiences, and opinions on the subject by a handful of riders. They may be currently pro, or may be influential and legendary on so many levels, or maybe they don't necessarily ride BMX as much as in their heyday of being sponsored, but they have one thing in common- they are all riders who happen to be black.

Our goal in doing this will hopefully result in the latter, to whatever degree. It’s not about creating more tension than what is already out there. It’s about bringing awareness, and hopefully it will help our community move in a more positive direction. A community that has never been about divisiveness - it’s a community based on those last five letters of the word = U-N-I-T-Y.

First up is the endlessly creative French rider, Alex Valentino. Besides being a pro rider for United and Vans, Alex is also the man behind clothing brand MArieJADE, the classic NO FUTURE full length video project, 4Down's French Connexion distribution setup and numerous other consistently quality projects throughout the years. There aren't many people out there who have contributed culturally to BMX in the number of ways that this guy has.

Alex filming on his La Belle Endormie Project in 2019. Photo by Fooman

The world as a whole has been dealing with racism of all types for millennia. It’s largely perceived as non-existent in the BMX community, a bubble separate from the real world. What are your thoughts on that?

One of the best things about BMX, for me, is that it’s a multicultural community uniting people from all over the world and from all walks of life. As a pro BMX rider I’ve had the chance to travel a lot and meet a lot of beautiful people from different backgrounds but that said it is unrealistic to think that this racism doesn’t exist in the BMX community. Through all these years I’ve witnessed and experienced a lot of clumsy behavior and talk that could be considered racist that I brush aside most of the time.

The place where you will experience the most hate and racism has always been the comment sections of videos or online forums, I personally have been attacked numerous times from early on especially when the comments were anonymous on websites back in the days . The first time it happened to me I was 19 and BMX was everything to me and my disappointment was so big that it made me question if I still wanted to be part of this community. I learnt from this and it’s better to know it exists than to act like it doesn’t.

Just like in the real world, you learn to live with it. You surround yourself with people who share the same values and even if by getting known in the community I experienced less and less direct racism there is still a reminder once in in a while.

"...it made me question if I still wanted to be part of this community. I learnt from this and it’s better to know it exists than to act like it doesn’t."

Do you think the prevailing issues are a more of a regional thing, like more rural, or in cities?

I’m sorry but for me this is not a relevant question because it doesn’t matter where it comes from. It matters when the system lets it happen in grand scale.

Internationally, some cultural behaviors have demonstrated overt racist tones. What’s been your experience both in the international BMX communities, and internationally outside of BMX?

Unfortunately we don’t have a choice. Racism is something you have to learn to live with wherever you are, there are no borders.

How about with certain law enforcement, both in relation to street riding and outside of BMX?

Here’s an example with street riding. One time when I was younger, I got arrested by the police and they took my camera equipment and made a point of verifying that it was not declared stolen in the region.

Also once when i was a kid, I was alone riding the skate park and a neighbor came to me and started to beat me up shouting racist shit and when the police arrived they did everything to convince me not to press charges and I didn’t and I still regret that today.

An my worst personal example was when I went to the police station for help with racism that I had experienced and I left with made up charges against me.

And I could go on and on.

Keeping it classic for the masses at Glasgow's 'Gnarly Bowl' during the UK Street Series Jam back in 2015. Photo by Fred Murray

"Racism is something you have to learn to live with wherever you are, there are no borders."

How do you see the bike industry, and community as a whole could improve in relation to race issues?

In terms of the actual industry and with the brands I work with I’ve never personally felt bad vibes or racial inequality. I feel like action sports like BMX, skateboarding etc are generally really inclusive.

What do you think is a solution to all the angst gripping the U.S. (and elsewhere) at the moment?

In a perfect world people shouldn’t have to protest for this but we live in a world where people get killed because of the color of their skin.

Skin in the game. Shot during filming for Still United in 2016. Photo by Fred Murray 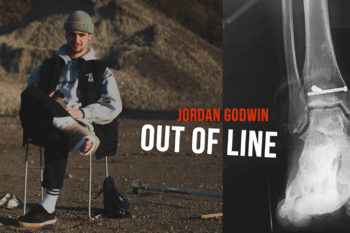 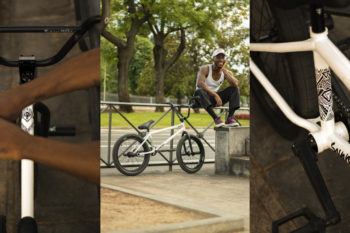