"we still got a long way to go"

The past month has been tumultuous in all realms of society, to say the least. Just when much of the world was starting to look forward to the easing of restrictions after the last few months of the Covid-19 pandemic and getting back to whatever the new “normal” will be post-‘Rona, viral video footage capturing the horrific death of George Floyd in the U.S. caused by police sparked a firestorm of protests demanding justice and racial equality. This wasn’t just happening in the U.S.; many cities across the globe were the stage for protests by people of all colors and creeds, marching in solidarity.

While racial inequality is by no means a new subject, BMX has for the most part always been perceived as a bubble of sorts from the real world, where creativity, uniqueness, and diversity are always celebrated. One where we all ride together, regardless of political and religious beliefs, class, nationality, or race. BMX has always been the bond that stands above all the labels and divisions the real world can succumb to.

After a few social media posts/ comments by riders expressing their negative experiences due to the color of their skin, they brought to light a discussion that for the most part has been an elephant in the room when it comes to BMX media. We at DIG thought it was as good a time as any to provide a platform to voice their thoughts, experiences, and opinions on the subject by a handful of riders. They may be currently pro, or may be influential and legendary on so many levels, or maybe they don't necessarily ride BMX as much as in their heyday of being sponsored, but they have one thing in common- they are all riders who happen to be black.

Our goal in doing this will hopefully result in the latter, to whatever degree. It’s not about creating more tension than what is already out there. It’s about bringing awareness, and hopefully it will help our community move in a more positive direction. A community that has never been about divisiveness - it’s a community based on those last five letters of the word = U-N-I-T-Y.

Next is one of the most legendary and influential dudes to ever touch a bike- New York City’s own Edwin De La Rosa. With epic, ahead-of the curve street video parts spanning over a decade, like in “Can I Eat?” which is still referenced over 15 years later, Ed’s riding amplified how things were done just as much as what was being done. During his time in the media spotlight, he also had a grip of A-list sponsors that backed him. Beyond his visionary style and progression on a bike, he's also transferred some of that energy behind the viewfinder of a Yashica T4, and has since become an uber-talented documentary street-style photographer. You can peep Ed's photos on Tumblr and Instagram.

A different 'Perspective' back in 2013. Photo by VInce Perraud

The world as a whole has been dealing with racism of all types for millennia. It’s largely perceived as non-existent in the BMX community, a bubble separate from the real world. What are your thoughts on that?

BMX to me is a thing that brings all cultures together. In the bubble of BMX, I still dealt with exposure to racism from time to time. It’s very unfortunate, but that’s just the way it is, dealing with people that are probably uncultured. I grew up in New York City, so I was exposed to a wide range of people from different backgrounds. Me and my homies didn’t see colors; we had the same goal- have a good time on a bike. In like 2003 I went to Sheffield UK for the Backyard Jam. I was probably the only black dude there. During practice, kids were drinking super-early. Someone threw the N-word from the stands. I got mad; I’m just here doing the same thing those guys were. I was about to get into an altercation, but I decided to control myself and realize that they just don’t really know what’s going on and were probably drunk. It kind of bummed me out. I’ve dealt with that kind of shit from time to time. I’m surprised it didn’t happen more. I’ve been the only black dude on a lot of trips; I tried not to think about it, but that’s just the reality of it.

Do you think any prevailing issues are more of a regional thing, like more rural or in cities?

In my experience, I’ve never had it happen in New York City. I’ve been good in cities. If you go to these different little spots that don’t really have diversity, then racism may be more prevalent. It’s a weird thing; I never really spoke about it before. That being said, that’s why I don’t go to the South. (Laughs) I always had that back in my mind; go down South, do anything, and they are going to come at you. Gotta be careful. Every time I go anywhere, I just gotta be on point, because I don’t want to be singled out for some bullshit.

"You’re not born not liking other races - it’s something you’re taught."

Any of the BMX communities are basically all love (outside of the Sheffield incident) for me. Outside the BMX community is love all around too. I don’t really deal with people outside of the BMX community (on trips), because you are with your friends and locals who are happy to see you. I’m sure there might have been other things that happened, but I blocked them out, and keep it moving. You can’t really flip out on everyone who’s not cultured; that’s not a sustainable lifestyle. (Laughs) As I get older, I try not to waste energy on things that can’t change people’s minds.

Have you ever experienced issues in relation to sponsors and the industry as a whole?

Not really. In the BMX industry no one ever said anything to my face. All the sponsors I had were nothing but genuine love. Me and Tyrone Williams were talking about things the other day, and you can tell when they don’t want to see a dude shine. They can hate, but they took our shit and went to Kinko’s and copied it all. (Laughs) BMX is still pretty white; it’s gotten more diverse. I started riding with Tyrone and Wormz (Ruel Smith). I’m Panamanian, and they are both Jamaicans. We got put together because NYC is the melting pot. I didn’t think we were doing anything special.

"I don’t blame the cops, because they just grew up watching movies where the black dude is the villain."

How high? Photo by Rob Dolecki

How about with certain law enforcement, both in relation to street riding and outside of BMX?

In like 2003, Bob Scerbo was staying at my house (in Brooklyn). We were riding to my house on my block and hopped on the sidewalk. Right when we got on the sidewalk, three detectives jumped out of a car, and asked me where I’m going, where I’m coming from. “I live right here.” At the same time, my mom was coming out of the building, so she saw the scene. They left, and I looked at Bob, “Yeah, that’s what happens in the city.” Dealing with that kind of shit. All these protests are going on, and I respect it, and I’m glad the conversation is coming up. But fuck man, I’ve been protesting my whole life. (Laughs) As soon as I got my first bike and went riding around exploring, it’s been constant harassment from the cops. I’m just a kid riding my bike. It’s just a normal thing; it’s part of doing business. I saw Tyrone arrested multiple times for no reason. I don’t blame the cops, because they just grew up watching movies where the black dude is the villain.

I watched “13th” recently, and the clips it showed from “The Birth Of A Nation” are fucked up. People were actually praising the movie when it came out just over a century ago.

It’s completely insane. The Civil Rights movement was not that long ago, and we still got a long way to go. I’m hoping something will change.

Think about the amount of shit that went on less than 70 years ago.

I’m just happy that America and the world gotta face it and watch the footage, and it’s making people feel uncomfortable, but fuck it. It is what it is. This is what I’ve been dealing with, and so many black and Hispanic people have been dealing with the same shit. Now you gotta see it. Do I think it’s going to change? No. Dudes getting smoked on video, and cops are not going to jail. it’s been going on for years.

Do you think there are any solutions to all the angst gripping the U.S. at the moment?

I don’t know. You’re not born not liking other races- it’s something you’re taught. There are a lot of people holding on to that hate; you gotta wait for them to die out. Hopefully this changes things, but I don’t think so. It’s just one incident that got everyone riled up, but it’s been going on forever. Racism isn’t any worse, it’s just getting filmed. The thing with social media, I just hope it’s genuine, and not a trending topic. A couple months from now, when things cool off, I hope people are still on it. It’s good that people are talking, but I hope it’s real, because me and millions of other people still gotta deal with the same shit.

From my experience dealing with cops on the street, cops are more scared than you. That’s why they are quick to draw, because they are scared to death.

That’s where it can come down to lack of training. If you didn't grow up/ hang out in a particular town or neighborhood you patrol, and also don't know how to read and gauge people, you are probably going to be scared. If all police had those skills, being so quick to use potentially deadly force wouldn't be such an issue.

When I see cops, I think it could go down. It’s a fucked up fear to have, I feel like I could die if I make the wrong movement. I just be respectful to the cops, my hands out of my pocket. I don’t want to die. I’ve seen it happen, I’ve seen the videos; they just keep coming out. I don’t like to watch them; it gives me anxiety. It’s just a weird time.

How do you see the bike industry, and community as a whole could improve in relation to race issues?

I think it’s good. BMX is a melting pot more than ever. When I was growing up in New York, I just thought it was like that everywhere. It’s a beautiful thing when people from all different backgrounds come together just to ride bikes. That was just in NYC; I’m sure it might have been different in other places, but I didn’t see it. It’s not in my DNA to hate anyone.

I think right now, BMX as a whole is a beautiful thing. It might take someone who might have been one way, but now that he’s in BMX, he’s exposed to other people and other cultures.

'That' Edwin photo, by Ricky Adam 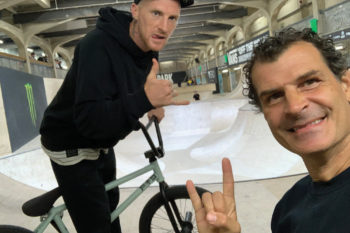 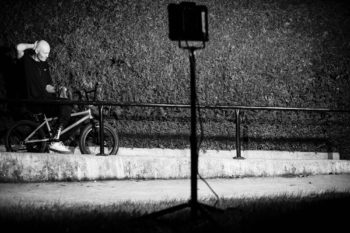 His fight against cancer has been both humbling and inspirational.