Some truly Old School history that you don't see every day...

When the opportunity arose to take a stroll through the fabled “Dungeon” at Profile, I couldn’t refuse. The Dungeon is the previous shop/ warehouse located down the street from the current setup in St. Petersburg, Florida. It’s basically a real-life time capsule, which ceased all operations in 2004, and the entire building was basically left as it was for the last decade and a half since the last crank arm was constructed there. Brand new original early 80s crank arms stacked in cardboard boxes, Hutch Judge and Trick Star frame fixtures (most likely the only ones ever in existence), stacks of rusting Pro Styler frame dropouts… it’s an old school collector’s wet dream. The manufacturing history there is incredible.

I snapped photos of a few of the many gems dotted throughout the building, and Profile's owner and founder, Jim Alley, was kind enough to give a back story behind each. Also check out the upcoming video series Profile is putting together, which goes into more detail about many of the other finds located in the Dungeon (first episode is posted at the bottom).

"We built frames for Hutch for about a year and a half. The Hutch frame was basically the Profile Champ Pro without the middle bar in the front triangle. We were building the Hutch frames off our fixtures. Hutch also purchased cranks at first, and put their stickers on them. Hutch wanted their brake bridge to look like it had bullet holes in it and to spell out Hutch. My son Cory was about 13 then, and we gave him a job. We made a master drill fixture that had Hutch in it, and he’d sit at the drill press and drill out all the holes in the brake bridges. It took about 10 minutes to drill out each bridge. Cory did a lot of them. Any Hutch frame out there (Pro and Mini) that has that bridge, they were built by Profile."

"The crank arms were first made in late ’79, early 80, which were prototypes. When we got involved in BMX, there were a lot of one piece cranks on bikes. I went to local races with my son Cory and daughter Justine. I honed in on the gate, since many races were won or lost there, and I’d watch these kids physically flexing the cranks. That’s how the cranks came about. We went back and started on some prototypes. We decided on the final version, made the tooling, and still make today."

"We started making pedals around ’83. Watching kids go around a corner and leaning their bikes over- a lot of them would stop pedaling at that point. The big square pedals were available by everyone, we though if we could make them horseshoe-shaped and round, you could lean the bike a little further and continue pedaling without the pedal hitting the ground. We made them out of both aluminum and magnesium. We were really pushing the little kid market at the time, and magnesium is about 35-40% lighter than aluminum. Just by luck, the foundry that did the aluminum pedals also did magnesium, so that’s how we got into that. We made that pedal until about ’86. We’d save all the magnesium chips from machining. You could actually set them on fire; they burn like a flare. The machine shop guys had a party with that. Nobody got hurt, nobody got burned. (Laughter)"

"We started manufacturing frames in late 1980, after we started making the box cranks. I looked at all the frames out there and they all had 1” top and down tubes. Through earning about strength in my racecar technology, we put it into the frames. We used an 1 3/8” down tube, and cut down the bottom bracket form 2 5/8” to 2 1/2”, and it cut down the bottom bracket flex. Shelby James was about 9 years old when he came to ride for us. He was a natural at it, winning world championships. He sold more bike frames than any pro rider we ever had. The last year we made frames was about 2002. Mark Mulville’s signature frame weren’t done in-house."

"When we started making the Pro Styler frame in ’85, we made these pegs that were designed specifically for it, and would screw onto the front or rear 3/8” axles. That was pretty much the standard for axles then. We also sold them to other companies."

"We had four full-time welders. They’d go from building frames, to building cranks. One day they made a chart, and kept track of how many cranks they were building. There are some frames on there, but we were building cranks like crazy. It’s pretty impressive; some of the years were 50,000 crank sets. That 3/4 - 48 splined crank spindle became the standard of the industry."

"We had a truck and trailer that was going to the races. This was inside on one side of the trailer, and you could see some of the product that was current at the time. It was a great way of merchandising.
Somewhere along the line we moved the case out of the trailer when we sold it, and been sitting since then (around mid 90s). We have no idea where the key is to the case locks. There are doors down below that we’ve had no access to. I think one of these days we’ll drill out the lock and see what’s in there; I’m sure there’s still inventory setting in there from that time period. The seat post clamps (pictured in the main display area) are the only ones left at Profile; We get calls about those all the time."

"When we moved from Flemington, New Jersey to Clearwater, Florida, we needed a sign on our shop when we got down here.  It was pretty crude looking. One weekend I just painted a sign. It was one of the first signs we put up here, which was made in July of 1978."

"We didn’t make the Pro Racer, Judge or Trick Star frames. These are the fixtures for making the front half of those frames. When Hutch left us as a manufacturer, he might have gone to MCS; eventually the production went to Thruster (located in Wayne, New Jersey). When Thruster went bankrupt, a good friend of mine who was a racecar builder went there to buy a Lot of chromoly tubing they had. You had to buy whole pallets of stuff and you didn't know what you were getting. I was up in NJ at one point, he contacted me and said he purchased something in that Lot that I might be interested in. It was full of these fixtures; I bought the whole pallet. There’s Hutch, Thruster and possibly Patterson fixtures. A lot of history there."

Profile - From The Dungeon: Ep 1 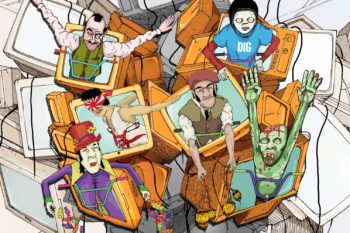 Look Mom! Is my variation of this legendary style legit? 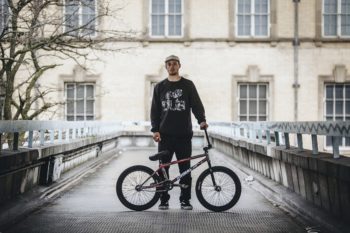 "My bar angle is touchy to me"