When you're visiting a new city to ride, it seems as though without even trying the city will shine down it’s true colors in no time. Learning the area first hand and keeping in mind rumors you may or may not believe, to possibly get a sense of what to expect from this unknown terrain… Next thing you know, your right in the middle of some antics, which confirm or deny what you were thinking. Take Albuquerque for instance, it is a city full of rumors, which doesn't necessarily positively reinforce the good name of the most largely populated city in New Mexico. Never the less, it's all about personal experience, right? Well for this specific trip, the Mutiny team came through town for 10 days and definitely found out first hand what this place is all about! Dealing with the spring weather of wind and rain during the month of April, Mutiny found themselves in a classic episode of the critically acclaimed T.V. series, 'Breaking Bad', on any given street corner all over the city there is an abundance of homelessness, drug addicts and crazed individuals such as a certain motel owner trying to pick a fight with Navaz for being a simple 'tourist'..

How do you write an accurate story about a town you grew up in, about a bunch of guys who haven’t ever been to that particular city before, to portray their experience first hand? Well, it seems as my observations would be somewhat biased, so I thought to properly convey the whirlpool of an experience such as this Mutiny Trip in Albuquerque, I would look through the eyes of some of those who the trip impacted the most, the riders… Justin Simpson, Andy Martinez, Jeff Wescott, Mariano Santiago and Grant Castelluzzo.

Justin Simpson surprises me every time he finds a spot to ride, especially when we were pedaling around the University. This hubba ledge has been sitting there untouched with a few feet of runway for years and leave it up to a cement ledge with no wax for Justin to shred down with metal pegs! Classic!

Grant has a very technical and calculated riding style which makes this crooked grind a simple piece to the puzzle to the beginning of a not so simple line.

Mariano has a style that is not like anyone else on the trip, and this huge bank to rock fufanu was an awesome start to a line just before the rain washed us out of this ditch!

"This trip was an awesome experience for me, I had a great time! All the spots out in ABQ blew my mind, all the ditches were absolute dream spots... The team guys are all pretty laid back dudes as well giving me a good enviorment to be able to ride!" - MARIANO SANTIAGO

Mariano has a great way of utilizing the term, 'steez' within his riding. This wall ride in downtown has been an epic go to spot for years and I haven't seen anyone carve it quite like this.

This spring's Mutiny trip was really amazing, there was definitely not a shortage of tweakers, Breaking Bad tourism, and the Coyote 102.5 radio station! We were fortunate enough to be able to hit the wide variety of spots that Albuquerque had to offer! - JUSTIN SIMPSON

Justin Simpson was ready for this 360 right out of the gate and it only took him one go. Jeff quickly followed him up with a trick of his own just before the security gave us the boot and locked us out.

Justin climbs up the ditch bank against the wind and oncoming rain after we spent a good hour cleaning out the ditch to make it ridable.

In my opinion, the most important part is when everyone can keep on smiling! It's amazing when a handful of people, who rarely see each other throughout the year, come together and create such an awesome project so organically. - JEFF WESCOTT

Jeff Wescott was shooting for his COMB line and interview while on this trip, here he is doing one of his favorite tricks. A big foot plant to boost to end the night.

Just the ability to be able to come out to New Mexico and see the crew brings something different to the table, opening my mind to new ideas and possibilities creating a vibe that uplifts everyone's energy! ...Amazing ditches, street spots, and surreal desert mountain scenery. Even though I had been injured for a few days on the trip, those days were very healing thanks to our trip to the hot springs! The trip felt really good on many levels in my life. - ANDY MARTINEZ

Andy Martinez certainly doesn't give up easily, and this spot was a perfect example of that. Andy fights this wall to wall and gets away with what he wanted!

The first spot of the trip turned out to be quite bountiful. This is one of those set ups that is a bit of a joke when you first get a look at it. A jagged rock slightly resembling a quarter pipe only a couple feet out of the ground, and a fence about 15ft away. This was a full speed sprint across the grass field to a manly boost into playground sand. Andy wasn't shook by any of these obstacles.

Only two days prior to the Mutiny team showing up to town, there was a fatal shooting at Los Altos skate park. Needless to say, we didn’t end up riding there the entire trip.

On this trip I was nostalgic when I was watching Andy ride, big gaps, ditch transfers making me remember what it was like riding and growing up in this city with almost endless ditch spots! Andy carves his way up the steep bank and out into the street!

Adam Accardi was an intricate piece to this puzzle, I called Adam only a week before the trip was scheduled to start and asked if he wouldn't mind riding with Mutiny and chauffeuring us around all week, and he simply replied, "Hell Yes!" Adam definitely didn't slow down on the clip count either, until he unfortunately broke his thumb...

The Blue Bomber: Adam Accadri was kind enough to be our chauffer on this trip, and he has the perfect vehicle and everyone was in love. A 1989 Chevy Sport Van with only 40,000 miles on it, and somehow he managed to acquire it for only $365 dollars in perfect running condition!

During finals week on UNM campus, we happened to spend a few days there finding some unique set ups and watching packs of students walk through with caps and gowns... Grant took his technical knowledge to this spot with a double peg hop over to smith to bar spin!

Everyone is stoked to be on their bikes and see their friends do cool shit. I hope that is apparent when you watch the video. My favorite part about this team is that we all do things completely differently but we all are having a blast doing it. - Grant Castelluzo

Photo by Ryan Navazio: If you have ever had the opportunity to witness an Albuquerque sunset, then you know you at least need one tall can of beer to take it all in... Justin simply sips a cold one, leaning on the notorious 'blue bomber' at the end of a long windy day in New Mexico.

Mutiny Bikes - The Land of Enchantment 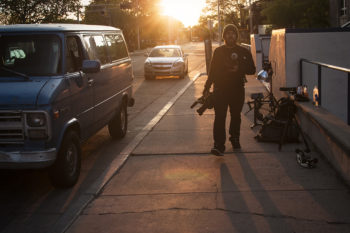 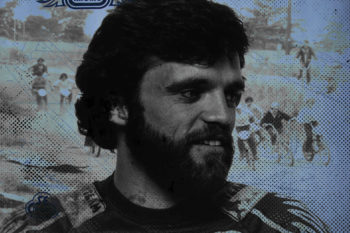 "Now, the cat has used up his ninth life." - Scott Towne