"the new controls become second nature in no time."

It's a fine balance when you're creating a video game for such a niche crowd as BMX riders. Anything too far from reality and core riders will rightfully criticise, but head too far in our direction and it can shut off interest from the everyday 'Joe Bloggs'. It's the same in most fields of interest and that's something that Adam Hunt's original game, Pumped BMX managed to master so well - on the face of things it was just a game focussed on timing, much the same as other titles with the side-on view. I'm sure I even saw a similar title which involved making a penguin jump and slide through icy mounds. However, the winning formula for Pumped was its level of accuracy on tricks and the style they were executed in. A turndown looked like a properly clicked turndown, and a table looked like it could have come from a Mike Aitken video part. In fact, Adam even went to the efforts of incorporating real-life riders into the Pumped world, and not only that, he also had Pro riders like Lima test the trial versions so it would feel as close to the real thing as possible.

With his newly released venture, Trail Boss, Adam wanted to take things further and bring the game into a 3D world with the ability to carve through trails and berms, skid, manual and transfer over different lines - pretty much the essence of trails riding. A massive step up from the 2D format! Upon initial impressions, the game controls were going to take some getting used to, not because of how they were laid out, but just that there was now a lot more going on to control and also the fact that I'm well into my 30s and any games after Half Life seemed like they needed a PHD in gaming to understand. For any kid though, Trail Boss would be instinctual. With the tutorial levels at hand though, it was a quick process to get into the swing of things.

Adam's vision of ripping through trails and berms certainly worked out with that being a major factor to the challenge, with some skinny and fast setups requiring a lot of concentration. As a rider the motions and physics of it all seem very familiar though and you can tell that the game has come from the mind of someone who has hit a lip or two in their time. Talking of lips, that was one challenge that Adam had to come up with a solution for - as in real life, transferring between lines requires you to hit the lip of the jump at certain angles - something that he has worked out perfectly. In fact, the transfer challenges are probably some of the most fun you can have in-game. And don't think you can just transfer wherever you want... you'll also have to negotiate trees, bushes and branches from the surrounding landscape, painstakingly constructed by Adam himself. Upon the first few plays it's obvious how much care and attention went into the construction of the levels.

But has the new version lost any of the special recipe that made Pumped BMX so appealing? In short, no. If anything it makes Pumped seem primitive. You may find yourself at first steering off course as you try to pump through the next jump on Trail Boss but that muscle memory soon wears off and the new controls become second nature in no time. A true make or break factor for a video game. And the tricks? Well, as with Pumped, these look just right with every movement looking like a well executed version of the real thing. Coming straight out of a berm and hitting an alley-oop 360 table transfer is so satisfying it keeps you wanting more. I originally thought I'd be the wrong person to review a video game, but being in my early thirties and instantly enjoying Trail Boss is testament to what a great job Adam has done.

Get Trail Boss BMX for iOS and Android.

Read our HOW TO BUILD A BMX VIDEO GAME article HERE. 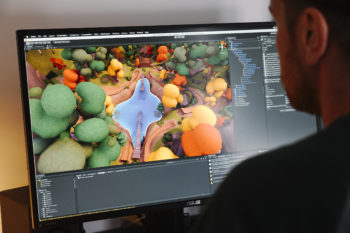 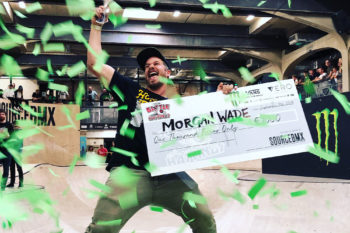 Another epic weekend In the bag