Then & Now: Brian Castillo and the Volume Dinosaur Frame

Celebrating The 20th Anniversary of a Volume Classic

Out with the old and in with the new? Well... not quite. Street innovator Brian Castillo and Volume Bikes have announced a 20th anniversary release of their classic Dinosaur frame, only this time it won't weigh over 7lbs and will come with a much more modern twist. We sat him down and talked about the fourth, and latest, incarnation of this long-standing classic, and found out a few of his thoughts on how things have changed over the years.

When did the first Dinosaur frame come out? It was a bit of a beast right?

What’s the highest price you’ve seen one popping up for on eBay or BMX museum?

I’ve honestly never gone to look at what prices are of older Volume products. Maybe I will now…

How many variations of the frame have there been? Can you give us a run down of each?

There’s been four now, including the new 2019 limited edition anniversary version. Since the specs always remained the same, there were only minor changes in the beginning. The first one was of the cartoon looking dinosaur that was released in 2001. It featured all straight gauge tubing, American BB shell and an external threadless headset. In 2003 was the backwards evolution of man to dinosaur, featured smaller 6mm dropouts, euro bb and an integrated headtube with gyro tabs. The third generation in 2005 was of the dead legends of rock. Not much changed on that one, except the tubes and everything else went down a size to save weight. The new 2019 model comes in 21” and has a shorter rear end of 13.25” and full heat treated CRMO tubing with dual gussets in the front. The other specs on it feature what I like: A 9.25” seat tube height, bottom wishbone, and a 75º head tube. Simple and clean!

How much has the geometry changed?

In the early years, it didn’t change much. Only little things like dropouts getting smaller, later going into the integrated head tube, euro bb, smaller tubing, and etc. Since I personally never steered away from a short front end and long rear, the overall specs remained the same on the earlier versions. The 2019 version is of the latest/ greatest specs so that any new rider would appreciate it. Don’t think I could ride one of the older Dinosaur’s these days with a 20.5” TT and a 15” chainstay! Holy shit, what was I thinking?

How has the manufacturing process changed over the years?

Volume was one of the first “core brands”, behind Hoffman to go to Taiwan with their products. From the start it was f-n hard working out all the kinks and dialing in what engineering process worked and what didn’t. Nowadays, the template has been made and it’s too easy to go there and make anything. In the beginning we only used straight gauge tubing, now everything is either butted or oval/ribbed for strength and weight savings. Overall, I think BMX frames kept simple and strong is key to being timeless. Think that goes to all BMX products in general though.

You did the graphics on the first one right? Was that the same for this latest model?

Yes, I did all the graphics for the Dinosaur frames. I look back at some of the art, like the very first Dinosaur graphic and cringe. The latest model was the second generation that I liked a lot more. Ideally, it was supposed to be the first graphics on the new one but I just couldn’t do it. The guys at the office tried to convince me but stuck to my guns.

What’s changed in your life since that first frame came out 20 years ago?

I guess the biggest is that BMX isn’t my 100% now. I remember it being 24/7 in my blood. I used to get crazy if I missed a day of riding and get all depressed and pissy. I have a family now and try to stay involved as much as I can with them. I don’t ride all that much anymore. Between work, coaching little league and everything else, I stay busy in other ways. Still try to get out and ride but definitely not like it used to be.

How much has BMX changed over that time do you think?

I don’t think it’s changed all that much. The tricks have obviously evolved into something crazier and on bigger things. Some things I can’t even comprehend! The industry and the products seem to go back and forth. To me, my era of getting a BMX bike meant freedom to escape your house, parents and hang out with your friends and have fun in the outdoors. The biggest change these days I see, is kids want the opposite of that; kids stay in, play Fortnite (or whatever) and you have to drag them out of the house to do anything. Hopefully it’s just a generation thing and kids will get back to that mindset of escaping their homes to play outside and jump on their bikes.

What type of rider is this latest model aimed at?

Since I always rode a bit of everything, it’s still aimed for the rider that likes to ride any terrain. 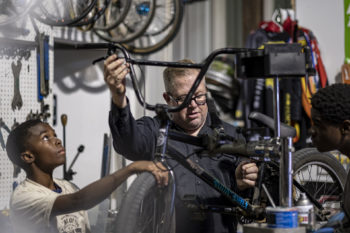 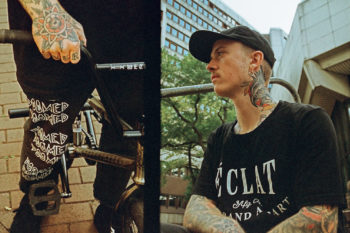