Ten becomes eleven for the Eclat team cementing it as one of the most stacked teams doing it right now. It must have been a no-brainer to add German prodigy Felix Prangenberg to the crew - a guy that is pushing the limits of street riding along with the fact that he couldn't be any tighter with the rest of the team. We've watched this guy go from young pup to seasoned Pro and we couldn't be happier to watch him push even further with Eclat. We cornered Felix for a word...

So big news Felix that you're joining the Éclat team, congrats! With you already having such a close relationship with everyone at We Make Things through WTP did it just make sense to join their parts brand as well?

Thank you! Yeah I can't see myself ever riding for another company because I’m so close with everyone at WeMakeThings and more than happy with how everything has been working out with them over the last couple of years. I’m super thankful to have people like them behind my back and now riding for Eclat makes it easier to do even more cool stuff in the future! I always thought that Eclat is the best parts brand with its innovative and super-strong parts that hold up super well for everything I do. Being under one roof just makes life more simple and allows me to concentrate on riding and filming.

The Éclat team is already insanely stacked, what's it like getting added to a team with arguably some of the best BMX has just now?

It’s still pretty crazy to me. I look up to every single person on the team and now being a part of the team is just unreal.

If you could pick one - who would be your favorite Eclat rider, past or present?

Wow thats a hard one. So many incredible riders past and present. If I was pushed for just one I'd have to say Bruno Hoffmann. I always looked up to Bruno when I was younger and remember riding with him when we were both kids and he even had a brake back then haha! Bruno was really innovative and made a huge impact on street riding over the years and really showed me that a German rider can make it outside of the German BMX scene. Still to this day he inspires me, we're good friends and I'm hyped we're now teammates.

The last Éclat team trip we saw was their recent excursion of Athens. Is there any word on when you'll be going on your first team trip?

Not yet but I’m sure it won’t be too long. We have some stuff already in the works.

Is there anyone on the Éclat team you haven't met yet that you're looking forward to being on the road with?

I’ve never met Sean Burns. I always loved his riding and how he always stuck out from the masses and did his own thing. He seems to have a crazy personality and his riding is just fearless with no half measures, just pure deadman BMX.

You and Jordan Godwin seem to click really well with each other, especially since you'll now be riding for the same four companies. Creatively and riding wise, do you push each other on trips or is it a laid back what comes may affair?

Yeah I’d definitely say we push each other. Jordan is one of my favorite humans. He has no idea how fucking good he is on a bike and what a great person he is. He also doesn’t take himself seriously one bit and I just love all that about him. Being on a trip, hanging out and riding with him just motivates me to keep up with the insane shit he does. Thankful to call him a good friend!

If you could choose any destination and filmer as part of your welcome to Éclat video where and who would it be?

This is a hard one. I’d probably go to Copenhagen again with my good friend David Schaller.

Speaking of the welcome video, which we can assume is in the works, how's that coming along?

Yeah, I just started filming for it with David. We filmed over three days so far and got three clips that I’m happy with. I hope the weather won’t be too bad over here in Germany the next couple of months so I can get more clips for it when I’m home. But I’m definitely planning on going to some warmer places this Winter to film for it.

It's been a wild year for you what with winning a Nora Cup last year and then the constant stream of content you've been pumping out with the Doomed boys. Is it tough physically and mentally filming all the time or is it something that comes naturally and fun to you?

A filming trip can definitely be mentally and physically exhausting but I couldn’t be more motivated to put stuff out and film all the time. If I’d have someone back home in Cologne where I could film with during the week I’d film so much more. I’ve been filming a lot with my friend David from Nuremberg which is like 4 hours away from Cologne for my Wethepeople DVD Part which I’m hyped on so far. I started filming for the Eclat Video, just got back from a filming trip to Palma de Mallorca with Bruno, Mo and Kilian for Freedombmx and a new project from Germany called Our House. I also just got back from Austria with the Kunstform boys, I actually filmed that one so it was nice to be on the other side of the lens for a change. So yeah it’s definitely fun to me and I can’t get enough of riding and filming! It’s just the best feeling to go out and film with your boys, to work for something that you are happy with in the end. I also just bought two Panasonic HMC 150's to film more with all the homies and work on a bigger project with them.

You've already got your signature Pathfinder line at WTP, is there any plans to get some signature products at Éclat on the go?

Yes! We are already working on a signature grip. Given that I'm working with the same people, its a really organic and fun process. Grips are something that I’m really picky with, and I'm hyped to be given the chance to design my very own. I can't give away too much but it's going to be something special for sure....

Before we wrap this up, how about we end this with some word associations for your new teammates to be? Here we go...

The Eclat Team just got even better - More Info 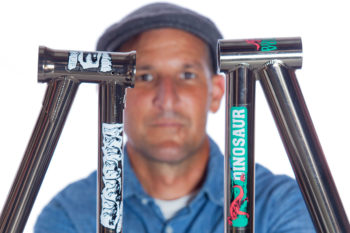 Then & Now: Brian Castillo and the Volume Dinosaur Frame

Celebrating The 20th Anniversary of a Volume Classic 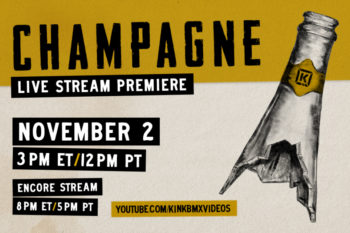 "Over 2 years worth of filming trips, from 20+ cities"